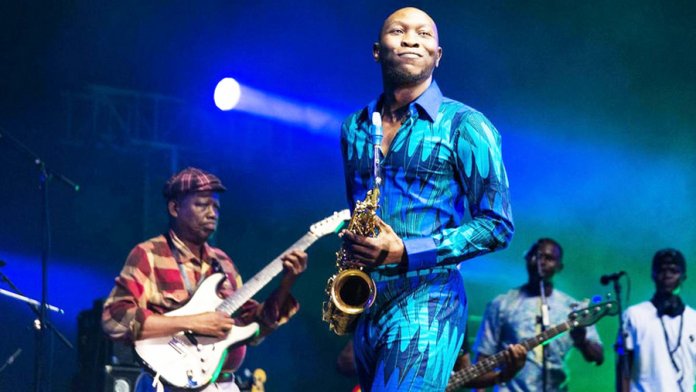 Seun, son of Afrobeat legend and pioneer of the music genre, Fela Anikulapo-Kuti, is set to thrill the world at the 2019 Grammy Awards in the United States. He also gets his first nomination in the World Music category for his latest album, ‘Black Times’. Ferdinand Ekechukwu reports

Seun Kuti is no stranger to big stages. However, the one coming up tomorrow is special. It’s the 61st Grammy Awards and Seun will be on its big stage at Staples Center, Los Angeles, United States, thrilling the world. He is one of the performers the world awaits at The Recording Academy Awards, better known as The Grammys. The youngest son of the Anikulapo Kuti clan is also among the front runners for the prestigious Grammy plaque in the World Music category of the awards.

Seun, who was recognised by the Academy for his latest studio album, ‘’Black Times,’’ picks up the baton from his elder brother, Femi Kuti, who has been nominated four times in the World Music category.

He will perform with Malian singer/songwriter, Fatoumata Diawara, at the award’s premiere ceremony where it would be given out in more than 70 categories.

Seun and Diawara will also perform together, while Ángela Aguilar, Aida Cuevas, and Natalia Lafourcade will unite for the first time ever to perform “La Llorona,” a Mexican folkloric classic. All three artistes have recorded during their career.

All of the premiere ceremony performers and the host are nominated this year, as are most of the presenters. In 11 years leading to his recent album, ‘’Black Times’’, Seun has released three other LPs alongside 2 EPs and has toured more countries than majority of his pop contemporaries.

In celebration of his 21st year as a performer, Seun who turned 35 earlier in January released his fourth studio album, ‘’Black Times’’ in March 2018. ‘’Black Times’’ is the album that has finally seen the leader of the new Egypt 80 band cast aside the shadows that trails his family name into becoming a man of his own.

The 61st Annual Grammy Awards will be broadcast live from the Staples Center in Los Angeles. Singer-songwriter Alicia Keys has been announced as the host, replacing James Corden, who hosted the show in 2017 and 2018. The 15-time Grammy winning Keys will be the first woman to host the Grammys since 2005, when Queen Latifah and Ellen DeGeneres were master of ceremonies.

The Recording Academy had also announced Diana Ross would perform at the awards. The televised moment will see the Academy “honour the icon and celebrate the rich history of her greatest musical accomplishments” with a special 75th Diamond Diana birthday performance.

Ross is the latest artiste to be revealed as a performer at this year’s ceremony; previously announced acts include Post Malone (who will perform with the Red Hot Chili Peppers), Brandi Carlile, Miley Cyrus, Kacey Musgraves, Cardi B, Shawn Mendes, Janelle Monae and more.

Ross, a Grammy Award winner, will celebrate her own greatest musical accomplishments on stage for her 75th birthday. A trailblazer in entertainment, Ross was the leader of the most successful female group of all time which in turn helped her launch a timeless solo career.

Her musical catalog includes an astounding 42 No.1 songs, 91 singles and 59 albums. Ross has also amassed over 100 million in sales and streams with her historic recordings.

Back in 2012 she was recognised by the Recording Academy as the recipient of the prestigious Lifetime Achievement Award. The ceremony will recognise the best recordings, compositions, and artists of the eligibility year, which ran from October 1, 2017, to September 30, 2018.

Presented annually by The Recording Academy, it’s one of the biggest nights in the showbiz calendar. 2019 marks the 61st year after it began in 1959. 2019 will see a few changes in store for the ‘Big Four’ categories.

The number of nominations have gone from five to eight to help better reflect the diversity of the music industry for – Record of the Year, Album of the Year, Song of the Year and Best New Artiste.

This year’s has a huge 84 categories including the one everyone wants to win – Best Album of the Year.