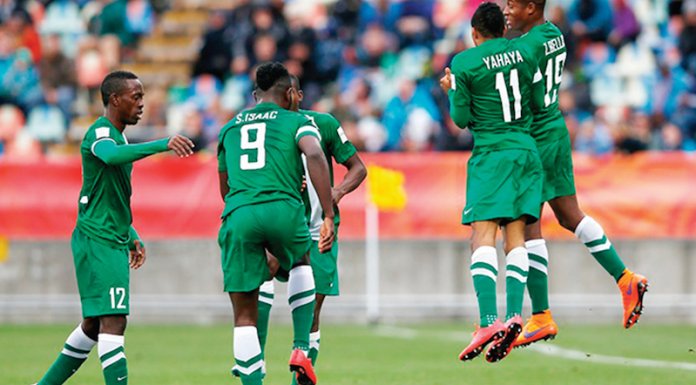 Team Captain Ikouwem Udo Utin and forwards Yahaya Nazifi and Effiom Maxwell are in the list of 21 players of Nigeria’s U20 squad that will battle for honours at next month’s Africa U20 Cup of Nations in Niger Republic.

Enyimba FC wingback Utin won a silver medal at the African Nations Championship in Morocco last year, while youth sensation Nazifi recently signed contract with a Danish club and Maxwell was Man-of-the-Match in the 4-2 defeat of Ghana’s Black Satellites at the WAFU U20 Cup Tournament in Togo last month.

The seven –time African champions will be buoyed by three foreign –based professionals, Igoh Ogbu of Rosenburg FC of Norway, Afeez Aremu of IK Stat FC, also in Norway and Denmark –based Nazifi.

The list has been submitted to the Confederation of African Football.

Nigeria trade tackles with Burundi’s Junior Itamba in their first match of the 2019 Africa U20 Cup of Nations on Saturday, 2nd February at the Stade General Seyni Kountche, hours after Niger Republic’s Junior Mena would have fought it out with South Africa’s Amajita in the competition’s opening match at the same venue.

The Flying Eagles would then play South Africa on Tuesday, 5th February before tangling with Niger Republic on Friday, 8th February in their final match of the group phase.