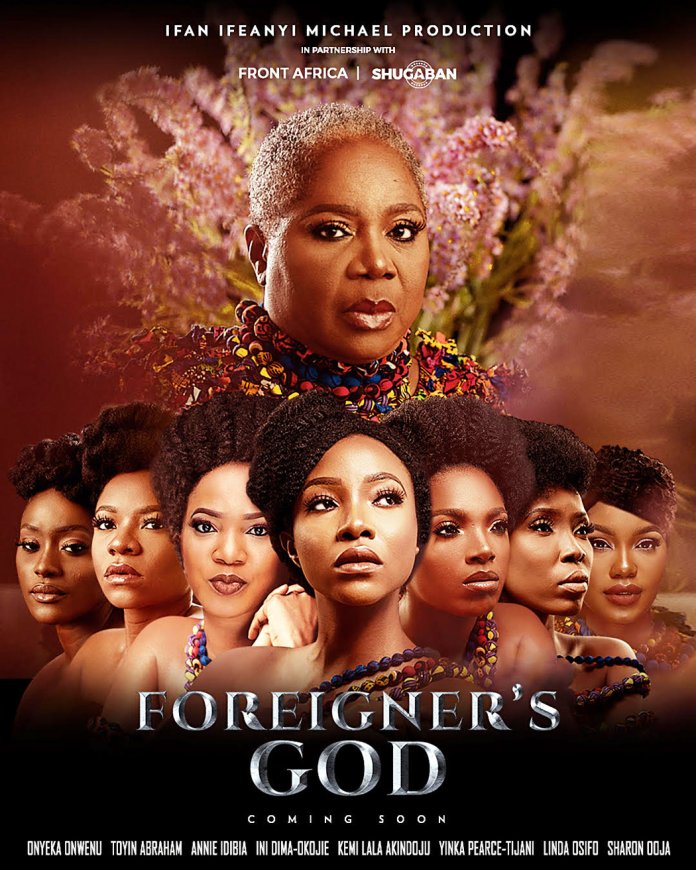 Towards the end of last year, a couple of Nollywood movies made it to the big screen, especially in the month of December 2018. As at last count, the numbers were not less than eight. From comedy to drama to faith-based movies, they all attracted a mixed genre, leaving movie viewers with pennyworth choices to make at the cinemas. These films in all estimation buoyed the movie scene more than ever as there was increased interest in Nigerian movies both at home and abroad.

As it would turn out, one of the movies earlier slated for release among the lot in 2018 would keep Nollywood watchers wondering when it failed to make it to the big screen. The movie ‘Foreigner’s God’ was highly anticipated following its publicity buzz and reports that it would hit the cinemas. The anticipation was not far-fetched. It was hinged on the success of the maiden work of the producer Ifan Ifeanyi Michael in 2016 titled ‘Lotanna’.

However, no release date was so far announced till date for the movie. In a recent chat with this reporter, the young producer Ifan, revealed that he has so much at hand with the movie and it’s highly been projected for the major film festivals. “I have a lot going on with ‘Foreigner’s God’ coming out this year,” adding that he never planned to release it as earlier speculated. “I never planned to release ‘Foreigner’s God’ last year because I want it to be the main dominant film in 2019.”

He further disclosed that the press viewing will come up very soon, after which the teaser and then the trailer will be released. Interestingly, its trailer/teaser is highly being expected by industry watchers and cinema buffs. One observer had remarked that “I’d like to see the trailer for ‘Foreigner’s God’, to know if its star power can be justified.” The movie boasts of star-studded cast. Among them are Pete Edochie, Sam Dede, Toyin Abraham, Lala Akindoju, Ini Dima-Okojie, Kunle Idowu, Sharon Ooja, Linda Osifo, Yinka Pierce-Tijani, Annie Idibia and more.

The official character posters earlier released by Ifan Michael Productions for the yet to be released film had announced Onyeka Onwenu as one of the lead cast. But in her place, as Ifan confirmed, will be Clarion Chukwura. The development was due to the import of miscommunication between the producer and the elegant stallion. Expectedly, this is going to be one superlative movie as it brings together veterans that made Nollywood great as it is.

On the movie, the producer had disclosed, in addition to the lessons learnt from the set that, it’s an in-depth story, which he considers a challenging work of literature. According to him, “This is an evergreen classic which will hold fondness to anyone who sees the movie. The literary devices in this film broadened my scope of work and also stretched my physical and mental ability. In life, it is important that you are finishing another significant level to work on so everything can come out perfect. Foreigner’s God is an eye-opener for me as a producer; the mistakes I couldn’t pick out from my first movie were easily spotted this time.”

By its official synopsis, the movie seems to cast back to Nollywood days of spiritual theme flicks. The story goes that at the peak of colonial-era Nigeria, English documentary photographer – Pepper Claude, follows a tale of the supernatural journey into the heart of Igboland in search of a story. All goes well until his bodyguard mysteriously disappears and he falls in love with one of the culprits – Anya, an accused witch living under subhuman conditions, in a witch camp in the heart of the jungle.

Convinced that this is just another case of tribal discrimination, Pepper Claude is committed to having Anya and her people free, until a series of unfortunate events set the world as he knows it, spiraling out of control. Written by Xavier Ighorodje, ‘Foreigner’s God’ has KC Ukadike as the co-producer. Ifan has been very strategic naming the cast. Henry Brintoncoes, an American actor also makes the cast alongside Ghanaian star and 2018 AMVCA Best Actor, Adjetey Anang with ex-Big Brother Naija housemates BamBam and Teddy A as the de-facto celebrity extras.

While Teddy A is making his acting debut in ‘Foreigner’s God’, Bambam has featured in Nollywood productions such as ‘Inspector K’ and ‘Backup Wife’ before participating in the BBN show. Popularly known as ‘Bamteddy’ during their stay in BBNaija house, Bambam and Teddy A were many fans favourite couple and they have continued together after the show. A thing Ifan acknowledged as a plus to the movie.

Also, sensational On-Air-Personality, Toke Makinwa, has been announced to play the role of a rape victim Ngozi, aka ‘GoGo’. Her inclusion in the project attracted wild applause from her fans. This will make Toke’s second role in a feature length. In 2015, Makinwa made a cameo appearance on Funke Akindele’s hit TV series, ‘Jenifa Diaries’, sharing a scene with Akindele and Juliana Olayode.

In 2017, Toke announced her role in the movie ‘Market Must Sell’,  as her major acting debut and also played Sidi from Wole Soyinka’s The Lion and the Jewel. “I really enjoyed the stage play and to think stage plays are the hardest, but I put in all I had, fell in the process but everyone loved it. It was wreck nerving but I’ll do it over and over again,” she confessed in an interview.

Toke added: “When I was informed of the role by the producer, I went through a series of emotions; fear, doubt compassion. Rape is a huge issue, millions of women out there suffer in silence and being able to stand with victims of rape with my voice is an opportunity I wouldn’t miss in a lifetime.”

For Ifan, who says “I believe a good script must have all the five elements of writing: character, dialogue, setting, structure and emotional engagement,” supposedly with the above elements in place, his much-anticipated movie should ideally be successful considering all elements.