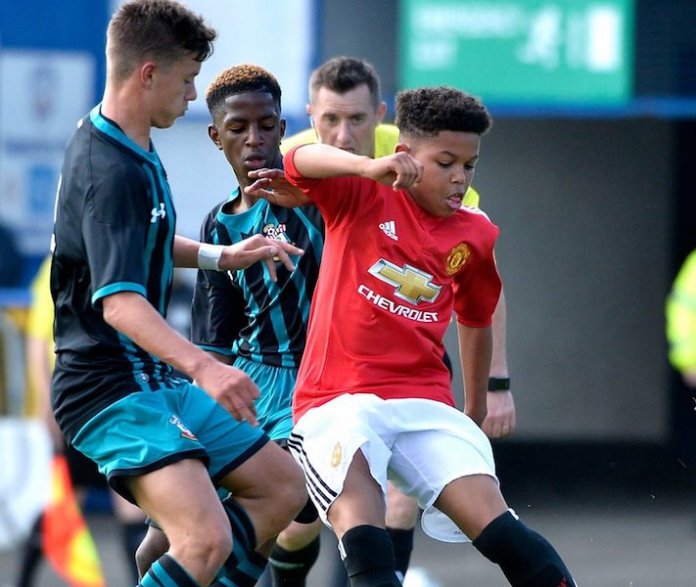 Nicky Butt’s United came from behind in Spain to top their group and continue their unbeaten run in the competition with goals from Nishan Burkart and Aidan Barlow cancelling out Jordi Escobar’s opener for the hosts.

Shoretire was sprung from the bench in the 74th minute, making history as both the UEFA Youth League and United’s youngest-ever player at this level, aged just 14 years and 314 days.

A diminutive winger, Shoretire is eligible to play for Nigeria and has already been invited to train with England’s youth sides after impressing above his age over the past two years.
He is highly regarded at Old Trafford, and was part of this summer’s U18 and U23 pre-season training camp in Austria.

The winger, just 14 years, 10 months and 10 days old, made his debut in the 2-1 win over Valencia – and is also believed to be the youngest player the Reds have fielded in an official youth team league or cup match.
He beat the previous UEFA Youth League mark of Benfica goalkeeper Mile Svilar, who in turn succeeded Real Madrid Iker Casillas as the youngest to appear in the Champions League.

The youngster, who is eligible to play for Nigeria but has caught the eye of England youth team selectors, got a pat on the back from team-mate Angel Gomes, who has already made his senior United debut.

The forward tweeted: “2-1 win to finish the group unbeaten. Great result! Also a massive shout out to all the debutants and 14 yr old Shola making his debut.”
The prodigious Shoretire travelled with Manchester United youngsters to their training camp in Austria.

Shoretire is only 14 but United coaches have recognised his outstanding potential by including him in a squad mostly made up of Under-18 and Under-23 players in Obertraun.
Academy head Nicky Butt is in Austria with the youngsters as the club considers possible replacements for U18 coach Kieran McKenna along with U23 coach Ricky Sbragia.

Shoretire, who featured at the Milk Cup two years above his age group last year, will likely play for the U15s in the upcoming season but his latest recognition could convince United coaches to hand him an early academy debut.
The diminutive Shoretire can play on the wing or up front and is described as an ‘exceptional’ talent. The teenager is eligible to represent Nigeria but Shoretire has already been invited to train with England’s juniors.

Manchester United Under 19s completed a convincing comeback against Valencia to round off their UEFA Youth League group stage undefeated and Shola Shoretire made a little bit of history as well.

The Red Devils went into the game against Group H’s bottom side at Estadio Antonio Puchade with four wins and a draw behind them.
It was the hosts, however, who came flying out of the blocks and enjoyed the lion’s share of both possession and chances in the opening exchanges.

That pressure led to the opening goal after United failed to clear a cross into the box and were punished by Jordi Escobar, who slotted home to put the hosts one up.
Nicky Butt’s side then survived a few close shaves including a goal-line clearance from Dio McGhee as Valencia piled the pressure on.

But the visitors found their feet and began to look more assured as the half wore on.
Then, Tahith Chong — last year’s winner of the Jimmy Murphy Award burst clear before his attempt on goal was saved, the deflection, however, fell kindly to Nishan Burkart, who chested down and finished well to restore parity.

Almost immediately after United found themselves in front.
Aidan Barlow collected Largie Ramazani’s cross before ghosting past the Valencia defender and converting his one-on-one chance.

Phil Neville’s son, Harvey, was brought on in the second half to try to see out the game
Butt then called on his former team-mate’s son as he introduced Harvey Neville, son of United legend Phil who used to be on the books at Valencia when his father and uncle Gary were coaches there, in the second half.

Shoretire was then introduced in the 74th minute and, in doing so, made history as the UEFA Youth League’s youngest ever player at just 14 years and 314 days and also United’s youngest ever player at this age level.
The diminutive midfielder helped United see out the rest of the game as they finished eventual 2-1 victors in Spain to top the group.