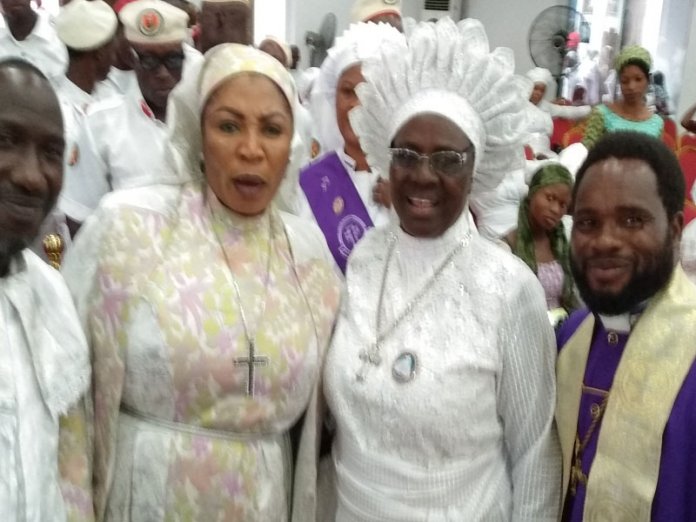 The glory of the latter days and an entrenchment of a new breed of Cherubim and Seraphim church members was the focal point of discussion as The Saviour’s Ministries Cherubim and Seraphim Worldwide, Ago Igbala Orisunmibare held its annual adult anniversary and thanksgiving services. Sunday Ehigiator reports

As early as 11:00am, last week Sunday, all roads led to The Saviour’s Ministries Cherubim and Seraphim Worldwide Pro Cathedral National Headquarters located at 155 Obafemi Awolowo Way, Alausa Secretariat, Ikeja, Lagos. Given the calibre of event, the area witnessed an unusual and unprecedented human and vehicular traffic.

Their aim was to celebrate the 2018 Adult Harvest and Thanksgiving Ceremony with a notable man of God, His Eminence Primate Dr. Solomon ‘Niran Aluko, the Baba Aladura and Founder of the church.

The ceremony witnessed the influx of notable personalities from the political, business and religious sector of the country into the brand-new church auditorium to celebrate the Thanksgiving service.

In his welcome address, Primate Aluko said the thanksgiving service is to celebrate the breaking of a new dawn in the church which is the promise of the Latter Glory.

“The theme, ‘Latter Glory’ connotes the glorious manifestation of God’s hands in our lives. I implore everyone who is present at this Thanksgiving to make this theme your watchword as you go into the new year by doing the will of
God always.

“This anniversary is not about making merry alone, but also to evaluate our spiritual life and that Godly prosperity is permitted by our creator, hence the theme ‘Latter Glory’ which connotes glorious manifestation of God’s hands in our lives that superseded every
previous situation in our lives,” he said.

Chairperson of the Harvest Committee, Supt. Apostolic Mother Abosede Osinowo, in her address, thanked everyone who made the event the huge success that it was.

Speaking on the harvest anniversary, Osinowo said: “We as members of Cherubim and Seraphim anytime from July always have a ceremony called the Annual Adult Harvest Anniversary.

“It is an avenue to showcase the goodness of the Lord in our lives all through the year and to express gratitude to God for his mercies. It is a time to celebrate, dance and make merry.”

Speaking on how the harvest committee arrived at the title of ‘Harvest of Latter Glory’, Osinowo went biblical to explain that the promise of God was that the glory of the latter days would be greater than that of the former, adding that what is witnessed in the present-day Cherubim and Seraphim is a strong departure from what used to be the norm in the past.

“What has happened in the past in the church will be nothing to compare with what God is going to do in our midst very soon. We are a new breed of Seraphs which is a clear departure of what used to be the situation in the past.
“We flaunt ourselves in the Lord and make the whole world see that we are a new generation of Christians who have been blessed by God, well dressed in sparkling white garments which is our signature dress code and not the smelly ones of the past.

“We make the whole world to see the glory of God in our lives and that we serve a living God as a lot of good things have been happening in our church lately and it is just a tip of the iceberg. We are marching into the new glory which is the latter glory,” she said.

In the sermon of the day, the preacher, Archbishop Michael Olufemi Akinsola, took members of the church on an enthralling journey into the word of God.

Speaking on the theme ‘The Latter Glory’, Rev. Akinsola urged every member of the church to brace up for the break of a new dawn in the church, which will take the church to the height it deserves as the first truly Pentecostal church in the country.

“I think it is time for people to know the truth about the Cherubim and Seraphim church, for so long the church has been treated as an outcast because of lack of knowledge that the church is the first true indigenous Pentecostal church in the country.

“So, an enlightenment message like this will go a long way in changing the perception of people about the church,” he said.

Speaking also on the forthcoming general election in the country, Akinsola urged all Christians to go out enmasse to vote for the right candidate.

“A new election year is fast approaching, so I want to urge every Christian to ensure that they go out there to vote and vote their conscience and not be swayed by material things,” he concluded.

To further underscore the new change in the Cherubim and Seraphim fold, the church launched its new Sunday School Manual for the year 2019.

Midway into the service, the Supreme Head (C&S) Unification Church of Nigeria, His Most Eminence Prophet Dr. Solomon Alao made his majestic entry to celebrate with one of the leading members of the Cherubim and Seraphim Unification Church of Nigeria.
Soon, it was time for the thanksgiving ceremony proper. All the invited guests and members of the church all trooped out to honour God with their substance.

When it was time for Apostolic Mother Osinowo’s turn to do her thanksgiving, the atmosphere became charged with joy as the whole church rose in unison to celebrate with her as she danced, sang in the presence of the lord.
At the end of the thanksgiving ceremony, invited guests and all church members were treated to a sumptuous array of local delicacies, while a guest artist was on the music stand to render sonorous music as the crowd danced away into the night. It was indeed a befitting climax to a glorious ceremony.

The Saviours Ministries Cherubim & Seraphim Church today has branches across the world including America and the United Kingdom.

Many notable men and women of the clergy were in attendance at the glamorous event. Among them were famous leader of the Celestial Church of Christ (CCC), Genesis International Parish, Alagbado, Lagos State, Prophet Israel Oladele, otherwise known as Genesis, Lord Bishop Femi Adepoju of JASFEM international ministry; Apostolic Mother Idowu Philips – a veteran actress- and various many spiritual heads of Christian denominations in the country.