As part of its commitment to inclusivity in the electoral process, the Independent National Electoral Commission (INEC) has said it is targeting 15 states where it plans to conduct 2019 elections for the Internally Displaced Persons (IDPs).

Its National Chairman, Prof. Mahmud Yakubu, disclosed this Wednesday at a Stakeholders’ Validation Conference on IDPs Voting in Nigeria, saying that the electoral body created the policy framework to guide the conduct of IDPs voting operations and bring the IDPs communities into the voting net.

Yakubu stressed that in 2015 general elections, the commission had a framework, such as the one day for IDP voting, which he said enabled the commission to accord Nigerians the opportunity to vote essentially in three states of the North-east of the country, Borno, Yobe and Adamawa.

The chairman stated, “This time around, it appears that displacement resulting in a number of citizens, not residing in places where they were ordinarily registered to vote, has led to much wider displacement.

“We interacted with Resident Electoral Commissioners (RECs), at the moment, we are looking at about 15 states, for a variety of reasons citizens are not living in their natural and normal places of domicile.

“Some as a result of the insurgency affecting some states in the North-east, some caused by farmers and herdsmen clashes, banditry in North-west and others by environmental factors, natural disasters, such as flooding that have ravaged a number of states and all these have led to the displacement of the citizens who are residing in internally displaced persons camps.”

He assured Nigerians that those who were displaced by circumstances beyond their control, would not be disenfranchised; stressing that proper democracy could only take place when it’s inclusive and participatory.

The chairman stressed, “Intra-state IDPs shall participate in all election categories when and where applicable, while inter-state IDPs shall only participate in presidential elections in order to limit the challenges associated with political perception and suspicion over transmission of results across state boarders and constituency boundaries.”

Also yesterday in Abuja, INEC signed a new Memorandum of Understanding (MoU) with transport unions for efficient logistics delivery in the 2019 general elections and beyond.

INEC Chairman described the signing of the new MoU as another giant step in the commission’s preparations for the 2019 general election as one of the critical challenges to the conduct of elections in Nigeria was logistics.

The commission, however, revealed that the Road Transport Employees Association of Nigeria (RTEAN) was yet to sign the MoU, noting that there were issues still needed to be addressed by the union before it could sign it.

Yakubu said that the commission required over 100,000 vehicles to deploy personnel and materials from its state offices to 774 local government areas, 8,809 electoral wards and 119,973 polling units, which he described as a huge undertaking.

He assured Nigerians that INEC was determined that all polling units nationwide would open at 8 a.m., saying the commission was determined to give Nigerians a pleasant voting experience in the 2019 general elections.

Yakubu stated, “In order to achieve this commitment, INEC requires over 100,000 vehicles. The logistical requirements are beyond the internal resources of INEC to provide.

“It is for this reason that the commission has been in partnership with the NURTW for which an MoU was first signed with the union in January 2015.

Yakubu appealed to the unions’ leaders to ensure that there was no failure on their part, especially when it is too late for the commission to make alternative arrangement or to hike fares and put INEC in a difficult situation on the eve of elections.

Speaking at the event, the National President of NURTW, Alhaji Najeem Yasin, pledged that the union would contribute its quota to ensure the success of 2019 general elections.

The National President, NARTO, Dr Kashim Bataiya, also pledged that the association would carry out its assigned duty effectively as stated in the MoU.

“We will do everything possible to carry out our duty effectively for the deployment of personnel and materials and other logistics. Bataiya also commended INEC for its early preparation, saying that would avoid regret.

On his part, the Corps Marshal of the Federal Road Safety Corps (FRSC), Mr. Boboye Oyeyemi, pledged that his commission would work with INEC in the area of certification of vehicles to be deployed in the elections.

“We will ensure that 80,000 vehicles required by INEC are certified and that their driver trained in order to ensure they are fit for the task for delivery of electoral logistics and general transportation,” he promised.

Oyeyemi who was represented by FRSC Assistant Corp Marshal, Mr. Victor Nwoko, said the corps would do more than it had been doing in collaboration with INEC, to ensure the success of 2019 general elections.

PDP Should Go to Court over Kashamu

Meanwhile, the electoral body has asked the Peoples Democratic Party (PDP) to go to court and vacate the order directing the commission to accept only the list of candidates presented on behalf of the party in Ogun State by the Buruji Kashamu faction.

The commission said it is only the court that could reverse its decision to accept and list Kashamu as the party’s governorship candidate for the state.

Saying the same position would hold for Zamfara State, where it has insisted that the All Progressives Congress (APC) would not be allowed to field candidates in the next general elections having not conducted its primaries within the stipulated time, INEC reiterated its policy to obey only valid orders of court in its operations.

The National Commissioner and Head of Legal Services of the commission, Mrs. May Agbamuche-Mbu, said these while fielding questions on the ‘Morning Show,’ programme of Arise TV, a broadcast arm of THISDAY, Wednesday.

She reiterated that unless the courts direct otherwise, it should be taken that the APC does not have a candidate in the election in the state.

Agbamuche-Mbu said that INEC monitors all primaries and where monitoring did not take place, there cannot be any candidate from that political party.

“INEC has continued to say that there was no primaries conducted in Zamfara State. We wrote to the party to let them know that we did not monitor any primaries in that state,” she said.

She stressed that members of the party are already in court as three cases have been instituted on the issue.

“They are in court. There are about three cases on the issue. So we will wait to see what will happen at the end of the day,” she said.

On the protracted crisis in the Ogun State PDP, where the party has disowned the recognised governorship candidate for the party, Senator Buruji Kashamu, she said that the policy of the INEC is that every order of court is obeyed until it is set aside.

“So it was a court order that stated that the INEC must accept and receive this particular candidate. We have received it and accepted it. It is left for the party to go to court and set it aside.”

Also, Agbamuche-Mbu admitted that there was evidence of underage voting in the last election, especially at the IDPs Camps in some states.

“So what INEC is doing at this time is that we are looking at the register, we are cleaning the register. Recently we had all the register pasted at the local government offices and our offices; and people have been invited to look at it and if there is any claims and objections they should say; and we have got quite a few.

“So we have been doing all we can to clean up our register. In 2019, the register you are going to get is a cleaned and perfect one.”

On non-Nigerians in the voters register’ and what implication this would have on the credibility of the election? Agbamuche-Mbu stressed that the commission was working with other government agencies to ensure that this would not happen in the 2019 elections.

“We are in touch with the Nigerian Immigration Service, we are collaborating with them so that they can help us identify the non-Nigerians in the register. So when the final register is published, you will see that there will be no underage voter on it,” she assured.

On the PVC that were not collected, she lamented, “Sadly, we have a lot of none collected PVCs. We have been going around to sensitive the people to come and collect their voter cards. Some times in the next few weeks, we are going to deploy the cards all the way to the ward level. We are trying to simplify the process of collection. We are hoping that more, and more people would come forward to pick their PVCs.

“In fact, in Imo State the Resident Electoral Commissioner suggested that we allow people to come on Sunday’s to collect their PVCs.” 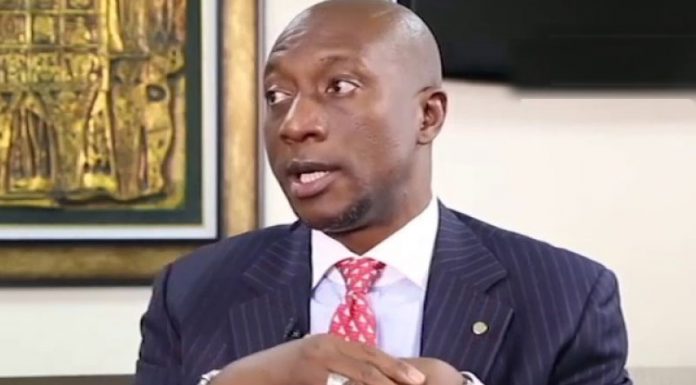