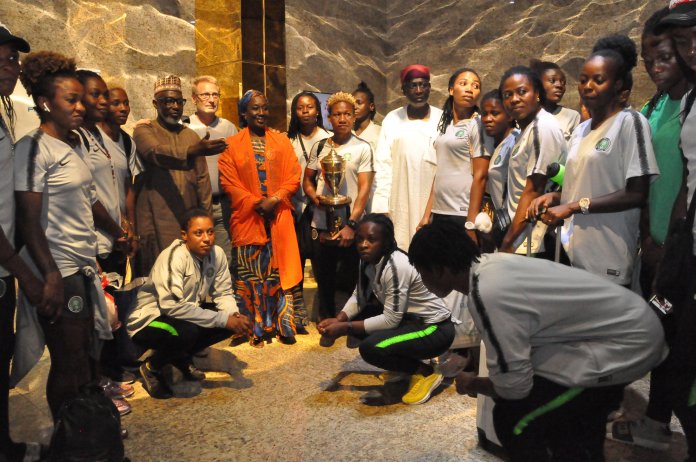 The Chief of Staff to the President and Commander-In-Chief of the Federal Republic, President Muhammadu Buhari (GCFR), Alhaji Abba Kyari, was at the head of a delegation of prominent Nigerians and top officials of the Nigeria Football Federation that received the Super Falcons on arrival in Abuja yesterday.

Nine –time African champions, Super Falcons, flew into the Nnamdi Azikiwe International Airport minutes before 4pm, aboard an ASKY Airline flight from Accra, and were received by Alhaji Kyari, NFF General Secretary, Dr. Mohammed Sanusi, as well as other officials of the NFF.

On Sunday, at the Accra Sports Stadium, the golden girls prevailed over a resilient South African Banyana Banyana side 4-3 on penalties after a scoreless 120 minutes, to lift the top African women football diadem for the third successive time and ninth time overall.

Holding aloft the Women AFCON trophy, the Falcons were wildly cheered by Nigerians at the airport and responded gracefully before they entered the bus that conveyed them to their hotel in the Federal Capital.

At the Starview Hotel, Alhaji Kyari commended the girls for a job well done, praising them for their tenacity, energy, determination and patriotic fervour.

“On behalf of Mr. President, who is not in the country at the moment, we say welcome and well done to you. We are proud of you and your representation of the country. Infact, as we were leaving the airport, two eminent Nigerians called and donated the sum of N50million and N25 million respectively to your team. Please rest very well. We will get back to you with the activities lined up for you in the coming days.”

Thenff.com learnt that the two eminent Nigerians who donated money are Alhaji Aliko Dangote (Chairman of Dangote Group) and Alhaji Abdulsamad Rabiu (Chairman of BUA company). It was also learnt that the Minister of the Federal Capital Territory, Alhaji Mohammed Musa Bello, will host the team on Monday, 3rd December 2018.

Also at the hotel to receive the Super Falcons was the Honourable Minister for Women Affairs, Hajiya Aisha Abubakar.

General Secretary of the Nigeria Football Federation, Dr. Mohammed Sanusi, said: “On behalf of the leadership of the NFF, we are grateful for the support from the Nigerian Government which has seen the team excel at the Cup of Nations. The girls have promised to do their best to represent the country very well at the 2019 FIFA Women’s World Cup.”

Meanwhile, Senate President, Dr Bukola Saraki , has described the victorious team as embodiment of the winning mentality and resilience of Nigeria against any challenge.

Saraki in a statement  by his Media Adviser ,Yusuph Olaniyonu, in Abuja on Sunday while congratulating the Falcons who defeated the Banyana, Banyana of South Africa in Ghana on Saturday described the team as the real  “Champions of Africa”.

The Sports Minister, Solomon Dalung, expressed happiness to the team for their display of hard work.

“Your supremacy in African football has been reaffirmed with this victory over South Africa and winning the competition for a record ninth time.

“Though the victory was a difficult one, it was a sweet revenge against South Africa who they lost to in the opening match. “

He eulogized the team for  not only qualifying for every edition  of AWCON but  for also clinching one of the Women’s World Cup tickets for France 2019.

While Governor of Delta State, Ifeanyi Okowa, expressed happiness at the discipline and commitment exhibited by the players despite the pressure and stiff competition from their South African counterparts.

“I commend the Falcons for their resilience and determination. They have made us proud and it is my hope that they will consolidate on this victory to represent Nigeria effectively at the FIFA Women World Cup tournament in France next year,” he stated.

One of the major sponsor of team, Nigerian Breweries Plc makers of Amstel Malta the premium malt drink,hailed the team.

In his congratulatory message to the team, Marketing Director of Nigerian Breweries Plc, Mr. Emmanuel Oriakhi, said “as the Official Malt drink of the Super Falcons and all the other national teams, we congratulate the team for a historic 9th conquest of Africa and qualification for next year’s Women’s World Cup tournament in France.

“We commend the team for holding its collective nerve in a second successive penalty shootout to clinch the trophy and be the best female national team on the African continent yet again. We congratulate you all for this feat and look forward to your further success on the global stage next year.

“As the Official Malt drink of the Super Falcons and all the other national teams, we congratulate the team for a historic 9th conquest of Africa.

“We also congratulate the Super Eagles for returning Nigeria to the Africa Cup of Nations after missing the last two editions in 2015 in Equatorial Guinea and 2017 in Gabon. 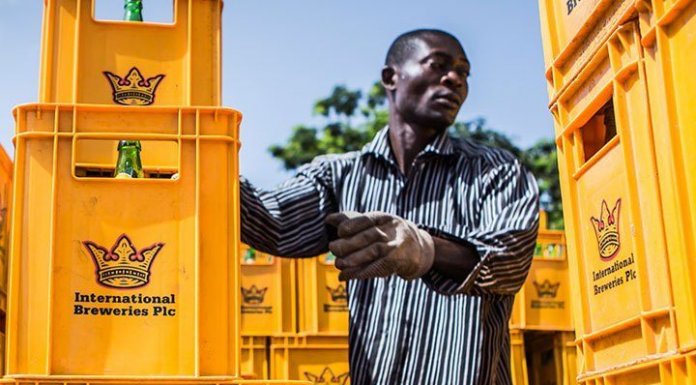