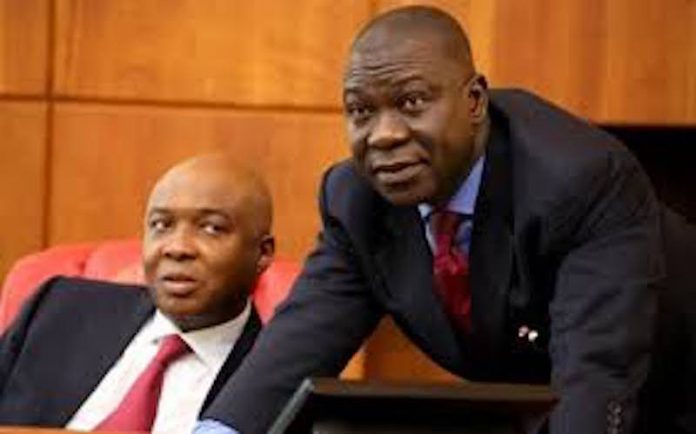 * Seek citizens’ vibrant participation in governance
By Deji Elumoye in Abuja
The Senate President, Dr. Bukola Saraki, and Deputy Senate President, Senator Ike Ekweremadu, have congratulated Nigerians on the occasion of the nation’s 58th Independence Anniversary.
While Saraki urged Nigerians to ensure a more vibrant, constructive and patriotic citizen participation in the governance of the country, Ekweremadu harped on free and fair general election in 2019.
Saraki, in an independence  message issued by his Media Adviser Yusuph Olaniyonu, noted that one of the key reasons for the non-realisation of the dreams of the founding fathers who fought for the nation’s independence from the colonial government was because the citizens failed to seize control of the fortunes and future of the country while allowing sentiments to determine the choice of leaders and what national objectives should entail.
“At this point when democracy has come to stay in Nigeria, all Nigerians should use the occasion of the 58th Independence Anniversary to redefine what should constitute the Nigerian dream, rally round that dream, support leaders who are capable and competent to realise that dream,” Saraki said.
He urged Nigerians not to leave politics and political choices to politicians and manipulative elements who invoke only religious, ethnic and geo-political sentiments to impose leadership who are only supported for the purpose of serving the interests of those who put them in office.
“Nigerians should re-dedicate themselves to the ideals of defining their personal interests in line with how it helps the realisation of national objectives. Our national objectives should simply be to build a united, peaceful, economically strong, internationally respected country, with robust military, well motivated work-force, ambitious youth and fulfilled citizens.
The Senate President also advised the citizenry to stop being complacent “as the best among us should be the one leading the rest. Voters should be ready at all times to intervene when government is derailing from the national objectives or placing personal or group interest above national interest. Never again must we allow leaders who behave as emperors, maximum rulers or messiahs and cabals created by them to seize control of government and its machinery”.
“With a vigilant citizenry that is well informed and involved in monitoring government activities, officials  and programmes, the prospect of good governance and improved standard of living for all Nigerians is bright and guaranteed,” he said.
On his part, Ekweremadu said only free, fair and credible elections could secure Nigeria’s democracy, and guarantee the much-needed good governance that would restore her to the pinnacle of glory.
He described a rigged election as a “coup by other means” against the will of the people and should have no place in a democracy.
Ekweremadu in his independence message said: “As we have always known, Nigeria is one of the most endowed nations on earth, but has not lived up to the promises she held at independence.
“For our nation to make progress, our democracy must flourish. And for our democracy to flourish, the people should be at liberty to elect leaders with the requisite character, knowledge, and pedigree, to turn the fortunes of the country around.
“Importantly, the government, stakeholders and all institutions of democracy, especially the Independent National Electoral Commission (INEC) and security agencies must respect and uphold the right of the people to exercise this franchise in a free, fair, credible, transparent, and peaceful atmosphere.
“They should not only vote, their votes must count as anything to the contrary is a coup by other means.”
Ekweremadu assured Nigerians that the National Assembly would upon resumption immediately consider and pass the extensive work already done by its relevant committees on the Electoral Act and budget proposal for the 2019 elections.