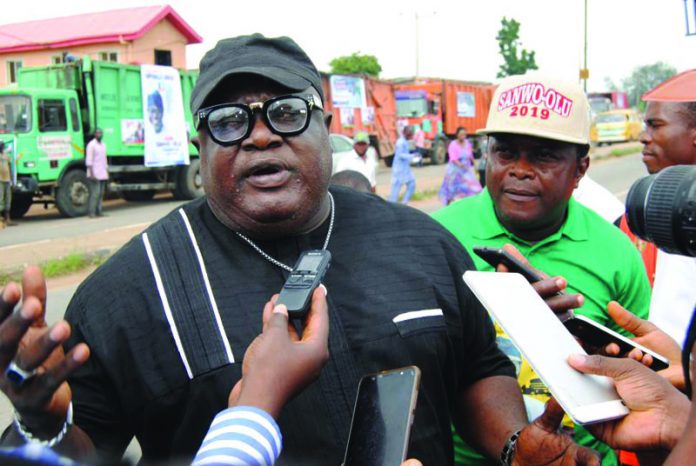 From as early as 8am, Thursday, September 27, 2018, Compactors and workers of the about 360 members of the Association of Waste Managers of Nigeria (AWAM), better known in Lagos as PSP Waste Operators, were positioned in about 15 points across the three senatorial districts of the State.

The atmosphere was carnival-like with detachments of the Boys Brigade group, banding out very moving sonorous melodies at every point of the gathered trucks in the State. Members of the association bore some of the banners and marched to the dictates of the melodious banding in this support rally for the bid of the former Commissioner for Establishment and incumbent Managing Director/Chief Executive Officer, Lagos State Development and Property Company (LSDPC) for the governorship ticket of the State.

All over, huge crowds gathered and discussed not only the interesting and unfolding political drama in the State but to take on the gauntlet and enthusiastically join the convivial celebration in the air.

As the trucks and the workers, manning each slowly dispatched into the now vastly waste ravaged highways across the State to embark on the free refuse cleaning exercise, the swarming crowd moved along to join hands with the cleaners of the PSP Operators to clear and evacuate the waste heaps on their routes from point to point. Residents of various communities now virtually living with refuse equally poured out to take advantage of the exercise, singing and celebrating as they emptied their homes of months of stack piled refuse into the PSP Operators’ vehicles.

Residents on Agege Motor Road as well as Oshodi Road, who stated that their cases had been made worse with the surrounding markets around them, were joyful that they had the opportunity to get rid of the waste that had piled all over for a while. A fabric dealer with shop close to the Planet Project on Agege Motor Road, Oshodi, who simply identified herself as Alhaja Monsura, noted: “Its divine intervention that Sanwo-Olu has sent these PSP operators here today to remove waste, we didn’t know for how long we were going to continue to live like this, we were faced with epidemic outbreak here any time soon, you can’t eat in the shop anymore as the whole place oozed with offensive odour but I hope this will continue to go on from now on, please, help to tell them that they shouldn’t  just do this for campaign purpose and stop, they should not allow the waste to pile up again.”

At Ipaja Road, around Abesan Estate on the way to Ayobo in the hugely vast Alimosho Local Government Area of the State, where the Chairman of the Waste Operators, Alhaji Ola Egbeyemi and his executive committee members gathered to join and formally flag off the exercise,   the line of trucks adorned with banners and Sanwo-Olu’s campaign posters for the exercise in the area, stretched to no end. Amidst the executive committee members of the Operators, some of whom were decked in the gubernatorial aspirant’s branded vests and Fez caps, Egbeyemi urged Lagosians to ensure that Sanwo-Olu does not only get the ticket to fly the APC’s governorship flag in the 2019 elections but that he wins the election.

According to him, the PSP operators have been assured by Sanwo-Olu that if he is elected to replace Ambode, waste management will be a cardinal programme of his administration and that he would restore Lagos to its former clean state and the jobs of the 25,000 workers of their members.

“We are very sure that if we vote Mr Babajide Sanwo-Olu, Lagos will reclaim its past glory; that is the purpose of this our support rally for him today, what is happening here right now is going on simultaneously in about 15 points across the three senatorial districts of the State. We have declared today free refuse-packing from the highways so that everybody will know that we can do it, we have done before and we will do it again, in waste management, there is what we call peculiarity of environment, no one can know your environment more than you and that is why no foreigner can manage our waste better than us,” the AWAN Chairman argued.

The Association’s Vice Chairman, Mr. David Oriyomi, added his voice: “Yes, many will be wondering why we have gone this whole length to cast our lot for Sawo-Olu, we have gone political because the waste management template put in place “by our grand patron, Asiwaju Bola Tinubu, which ensured that we were in all the 357 wards in the State to ensure that every nook and cranny of our environment was clean has been thwarted through political means. It is, therefore, necessary that we put it right through a political means. Sanwo-Olu has shown that he cares about the environment and he will restore our environment to what it used to be before the last three years and that is why we are urging all lovers of the environment to join us to ensure that he takes over as the next Governor of this State.”

Mr. Olugbenga Adebola, AWAN spokesman, on the other hand, said the PSP operators were saddened to see their achievement of making Lagos State one of the cleanest cities in the world, being reversed in the last three years.

According to him: “Things cannot be allowed to remain this way and that is why we have embarked on what we are doing today, a free service to drum up support for Mr. Babajide  Sanwo-Olu, who we are confident will restore all of that, if he emerges the next Governor of the State, he is a man who will build on the legacies of Asiwaju Bola Ahmed Tinubu and Babatubde Raji Fashola in this regard.”