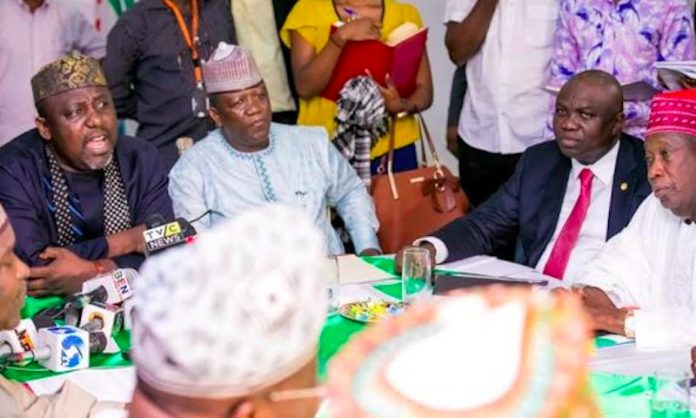 Governors of the 36 states of the Federation have said that they will not succumb to blackmail or be stampeded into reaching an agreement on the new minimum wage.
This is coming as the Nigeria Labour Congress (NLC) and its affiliate unions would commence a nationwide industrial action starting from midnight today (Wednesday) to protest the delay in fixing a new minimum wage for public servants.

The governors’ position came just as the nation’s apex tax administrator; the Joint Tax Board (JTB) has confirmed that most of the states have witnessed enhanced revenue generation.

The governors under the auspices of the Nigerian Governors Forum (NGF) said they would only accept a deal after proper assessment of their capacity to pay any increase in wage bill.
THISDAY gathered yesterday from a reliable source close to the governors that the committee set up by the state chief executives to advise them on the minimum wage issue was yet to submit its report.

The source said the committee was not able to interface with the state chief executives last week as planned due to the cancelation of the meeting of National Economic Council (NEC).

“The governors are waiting for the committee’s report to enable them make a statement. I think the committee would have submitted its report last week but that didn’t happen. What the states are saying is that they may not be able to accept a flat rate figure for minimum wage since most of them are currently facing economic challenges,” he said.
Also, some of the governors have brought up the issue of the refusal by public servants in their states to submit to a forensic audit of the staff salary payment.

According to the NGF source, the position of the governors are that without accurate analysis of the staff strength and wage bill, the states may not be in a position to accept any increase in the present minimum wage.
In another development, the Joint Tax Board (JTB) has hailed the Nigeria Governors’ Forum Secretariat on its contributions to the reinvention of tax administration in the country.

Speaking at the NGF’s 2-Day Training on Human Resource Management for States Internal Revenue Services held at the Forum’s secretariat in Abuja, the Executive Secretary, Joint Tax Board, Mr. Oseni Elamah, extolled the NGF on its role in spearheading enhanced revenue generation amongst states in the country.

“I appreciate the NGF on the role it is playing towards ensuring the attainment of the lofty ideals of enhanced revenue generation in the country, especially given the need for states to explore alternative sources of funding under the reality of dwindling federal allocations. It was without much resistance that during the 137th meeting of the Board in 2017, the NGF was admitted into the Board, having an Observer status.

“It is my pleasure to announce that the expectations of the JTB have been vindicated as the NGF has been involved in organising programs that has had positive influence on the Nigerian tax environment,” Elamah said.

Meanwhile, barring all unforeseen circumstances, the NLC and its affiliate unions would commence a nationwide industrial action starting from midnight today to protest the delay in fixing a new minimum wage for public servants.
The various unions had jointly issued a 14-day ultimatum threatening to embark on industrial action if the federal government fails to reconvene negotiations on the minimum wage.
In a statement issued by NLC’s General Secretary, Peter