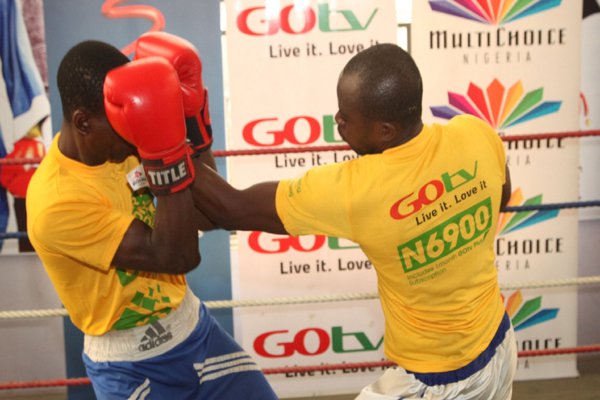 For three days last week in Abeokuta, capital of Ogun State, the effort to remedy the defects in Nigerian boxing continued at GOtv Boxing NextGen Search 4. The dip in the fortunes of the sport from the late 80s had the unavoidable consequence of leaving the country with a crop of ageingboxers, a situation worsened by the absence of a deliberate developmental programme to replace the fading stars of yesteryears.

It is this huge, blank space that GOtv Boxing NextGen Search was designed to plug. The programme was conceived in 2015 to unearth young and talented boxers and develop them into world beaters as well as function as a conveyor belt of new boxers seeking to replace the ageingones.

The objective of the programme was evidently in view when a record 150 boxers stormed the Dunkin Pepper Gym inside the MKO International Stadium Abeokuta, capital of Ogun State, on September 13 for the fourth edition of the programme. For three days, the youngsters who came from five states (Abia, Enugu, Oyo, Ondo, Lagos and Ogun) as well as the Federal Capital Territory (FCT), had the opportunity to display their skills in their bid to secure a passport into the professional ranks. Ahead of the sparring sessions by which they would be assessed, the air was thick with hope and nervousness. Neither was unexpected. After all, the judges’ panel was made up of some of the most celebrated figures in Nigerian boxing, which made the experience similar to that of aspiring actors auditioning before Oscar winners. Among the judges were Joe Mensah, Obisia Nwakpa and ex-Olympian Jerry Okorodudu, all former boxing champions and renowned coaches.

Also on the assessors’ panel were boxing authority figures, represented by Dr. Rafiu Ladipo President of the Nigerian Boxing Board of Control (NBB of C), on the first day; and Remi Aboderin, President, West African Boxing Union and NBB of C Secretary-General, on the second day.

Also in abundant supply was enthusiasm, which went on display immediately the first bell rang. Fans, who hung outside, strained to watch the action through the gym’s glass window.

On September 15, the final day of the programme, 20 boxers were deemed fit by the assessors to proceed to the professional cadre. Exceptional performances were equally recognised, with 18-year-old Opeyemi Elijah, a bantamweight, picked as the best of the bunch.

Elijah was participating in the trials for the second time, having been selected at GOtv Boxing NextGen 3 in Ibadan, but was advised to suspend his decision to turn professional until he is a year older. The duo of Akintayo Aminu and Shogbanmu Waheed were adjudged as the first and second runners-up respectively. Each of the outstanding trio was rewarded with a GOtv decoder.

Those who were not selected were advised not to give up their dream.

“That you have not been chosen today should not mean the end of your dream. You must promise yourself that you would do better next time. It does not mean that you will not be champions at some point in your careers. A few of those selected today were at the last edition in Ibadan and were not selected then,” said Jenkins Alumona, Managing Director of Flykite Productions, the organisers.

He also announced that all the selected boxers will have their professionallicences and their pre-licensing medical examination fully paid for by the sponsors, as well as the opportunity to make their professional debut at upcoming editions of GOtv Boxing Night.

The NBB of President commended the sponsors and the organisers for the initiative, which he said has helped to discover boxers and given hope to the youth of the country. He urged other corporate organisations to replicate GOtv’s gesture in sponsoring boxing camps in order to keep the young ones occupied and shield them from anti-social activities.