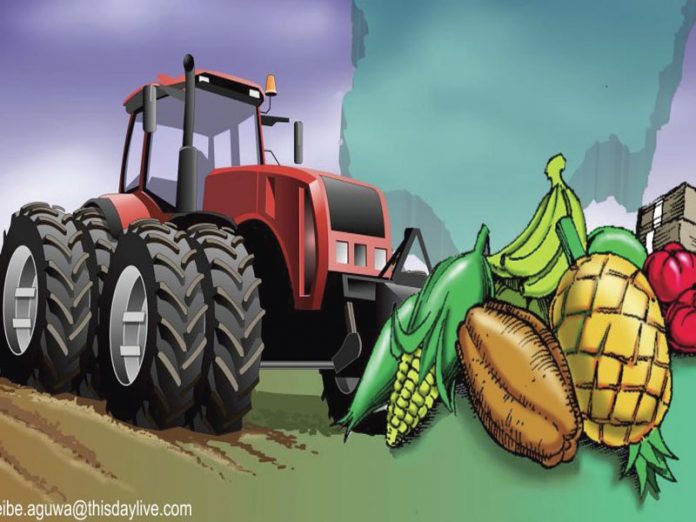 Self-sufficiency in food production is one that Nigeria needs to attain to improve the living condition of its citizens, Ugo Aliogo reports

According to a study by the Africa Development Bank (ADB) with name ‘Feed Africa’ and titled “Strategy for Agricultural Transformation in Africa 2016-2025,” it was noted that agriculture remains an integral part of both the African economy and the daily living of the majority of Africans.
This study also stated that agric-related endeavours accounted for just over 60 percent of jobs across the continent.

The study noted that despite its central role, the agriculture sector represents only a quarter of Africa’s Gross Domestic Product (GDP), ranging from three percent of GDP in Botswana to almost 50 percent in Chad, the Central African Republic, and Sierra Leone, owing to the low productivity of the sector.

It observed that in recent years, while commodity prices were relatively high – particularly minerals of which Africa is home to a third of the world’s reserves – Africa was a particularly fast-growing region with average annual growth around five percent.

It added, “Africa’s economic growth has not been sustainable, and, in some cases, previous gains have been lost because of the historic dependence on raw commodity trade.

“Agriculture is a good option for the required diversification, as it exhibits lower price volatility and the continent has substantial undeveloped amount of the necessary endowments.”

Agriculture Sector Under Buhari
Under President Muhammadu Buhari on November 17, 2015, the Central Bank of Nigeria (CBN) launched the Anchor Borrowers’ Programme (ABP) in line with its developmental function. The programme was launched with the intention to create a link between anchor companies involved in processing, and small-holder farmers (SHFs) of the required key agricultural commodities.

The thrust of the ABP is the provision of farm inputs in kind and cash (for farm labour) to small holder farmers, to boost production of these commodities, stabilise input supply to agro-processors and address the country’s negative balance of payments on food. At harvest, the SHF supplies his/her produce to the Agro-processor (Anchor) who pays the cash equivalent to the farmer’s account.

In accessing the progress of the agriculture sector under the Buhari administration, the Vice-President, Professor Yemi Osinbajo, said the sector had achieved 3.6 percent growth rate, stating that the sector was key to the administration, especially in the diversification of the economy.

He said, “Thinking of diversification of the economy, agriculture is the intuitive market.”

He also stated that before the administration came on board, the country was importing rice to the tune of $1.6 billion yearly, while $5 million was spent daily.
He explained that through the efforts of the administration, they had cut down the figure to two percent and that they had improved rice production “and we are practically self-sufficient.”

Osinbajo added: “Before now, we were importing rice to the tune of $1.6 billion yearly, and daily, $5 million was spent. Today, we are down to about two percent of the rice we are consuming. We have improved rice production and we are practically self-sufficient.

“On our part as a government, we are creating the right environment.
“The Anchor borrowers’ programme was an important programme in getting people back to the farm and milling was also very important part of the programme. We supported farmers in rice production. Therefore, it was a deliberate effort to ensure that we did not only improve the production of rice, but get the private sector to be involved and they responded very well.

“During the recession, because of the focus on mining, growth continued and today, the sector is still growing,” the VP stated.

Interest Rate
This is one of the key challenges facing the sector. The federal government had expressed fears over high interests charged by banks on loans given to farmers as well as lack of agriculture stakeholders to mount pressure of Nigeria’s political class, especially lawmakers, on food policies for the country. In his reaction to the issue, the Minister of Agriculture, Chief Audu Ogbeh, said the high interest charges by various banks on loans to farmers were unacceptable, noting that if the rate was not reviewed immediately, it would worsen food production in the country.

Experts’ Opinion
In addressing the challenges facing the sector, experts believe that it requires not only government intervention, but the commitment of key stakeholders who understand the sector and what is needed to drive its growth.

The Acting Head, Department of Economics, Lagos State University (LASU), Dr. Ibrahim Bakara, noted that the British Prime Minister Theresa May’s statement that Nigeria represents the capital of the world poorest folks with about 87 million people at $1.90 per day portends a great danger as to the state of malnourishment of Nigerians.
He also noted that the country had not done well in policy implementation, especially in agricultural programmes that are development driven.

He stated that government was paying lip service to the growth of the sector and if population growth is not checkmated, or if allowed to grow at a geometric rate, “then the gap between the two may have to be accounted for and I think that is what we have not been able to get right.”

Bakare said the country’s food production was not growing at a geometric rate, relative to the population of the country and that government was not making concerted efforts for people to understand that it is committed about enhancing food production in Nigeria.

According to him, “the reality is that, for any aspect of the economy, if transparency is not given due recognition, I doubt if we are going to get there. The reality on ground is that, do we have appropriate mechanism or channels, and are the stakeholders involved in all these?

“The cassava value chain is an area where I expected government to have performed very well. The country spends up to N3 trillion annually importing products from processed cassava. The reality on ground is that we are wasting as a nation.

“The government policy-as long as it does not really flow down to the masses who should have been the major beneficiary, I don’t believe the bogus statistics which the government is presenting. The statistics are just meant for administrative purposes.

“These statistics are not just working. It is high time we move macro-based statistics and allow policies of the government to flow down. If the policies of government are working, traders and farmers will confirm it that government is doing well. We should not be bothered with these bogus statistics which will aim at telling the international community that we are doing well, when in actual fact, our farmers are suffering. Farmers are ready to work and give us what we want.

“The farmers are frustrated, they are not happy. How can we get our food prices reduced when the farmers are not given the necessary support and enabling environment to practice agriculture? It is very disheartening.

“In most Africa countries, we have the arable land and the labour, but we produce less. While in the advanced world, the land is smaller compared to ours, but because agriculture is highly mechanised, their productivity quadruples to what we produce in this part of the country. It is time we revolutionise agriculture. It is time for government to bring fairness and transparency into agriculture.”

Recommendations
In recommending the measures to address the issue, Bakare said that government should understand that the sector is actors’ and governance-oriented project.
He, however, noted that to move the sector forward, it requires a stakeholders’ approach and except the government factor these issues into consideration, whatever solutions being advanced would fall as a pack of cards.
He explained that there was the need to take cognisance of the stakeholders’ approach, and then, the government should genuinely provide easy credit farmers at very low interest rate.
The Acting HoD said in every stakeholders’ or actors’oriented approach, there is an identification who are the active and passive actors.
He added that in stakeholders’ or actors’-oriented approach, government is supposed to provide the coordinating role, where they would bring into the arrangement, transparency, reciprocity, understanding, effective communication and ensure that the farmers are at the core of the project.

He said: “There is the need to promote decent employment in the agriculture sector, especially in the rural areas. In this regard, I expect our government to have done a lot in using our National Youth Corps members to feed the nation. Let us have ‘corpers’ in farm villages.

“The corpers that can feed Nigeria on annual basis. They can support the practicing farmers. Government should provide infrastructure for them such as health insurance, social welfare scheme so that these farmers will be encouraged.

“There is also the need to promote non-farming the rural areas. The reason is because farmers most times would want what they are doing to be diversified. There is the need for provision of modern storage facilities to preserve agricultural produce. This will help in preserving post-harvest loss. The challenge we have in the country is that most of the things we produce get wasted.

“There is also the need to provide road infrastructure to facilitate movement of farm produce from the farm to the market. The roads need to be connected to the rural areas. There is the need to take care of the various forms of risks involved in agriculture production such as harvest losses, flooding and others.

“Also, social networking and farmers’ corporation is very important. Then accessible and cheaper education for farmers is very important because what farmers are exposed to in the advanced world are, continuous training and education on the best agriculture practices globally.”

It is also expected that the recently introduced real sector support facility (RSSF) by the CBN will boost investment and provide low cost funding for businesses in the sect
The initiative is also expected to support the country’s drive towards economic recovery in the country.