The leadership of the All Progressives Congress (APC) has accepted responsibility for failing to nip in the bud the embarrassing face-off between the Speaker of the House of Representatives, Hon. Yakubu Dogara and a member of the party and former Chairman of the Appropriation Committee, Hon. Jubrin Abdumumini, over the 2016 budget.

Speaking during a session on the proposals for amendments to the Electoral Act organised by the PGF, the Deputy National Chairman of the party, Chief Segun Oni, apologised on behalf of the party leadership for the lapses in handling the intra-party feuds and promised that steps were being taken to ensure frequent interface with its lawmakers.

The co-chairman of the Progressives Governors’ Forum (PGF) legislative programme and the Kastina State Governor, Aminu Bello Masari, also advised the APC National Working Committee (NWC) led by Chief John Oyegun to be proactive and do the right thing at the right time to resolve some of the crises facing the party.

Providing clarification on what gave rise to the late response by the party to the public altercation between its members in the House of Representatives, Oni said that the leadership did not want to be on the wrong side of public opinion.

“There are things the party should do and there are positions the party should take to make things right. I personally, and in my personal opinion, think we were being too conscious, we always want to be right, to take the right position.

“But I think that what we should do as a party, most of the time, is to take a firm position even if some people consider it a mistake. But if it is a firm position, that is our position.

“On the National Assembly crisis, we are looking at it, and like I said, once we agree we would debate and take a firm position and that will be our position,” he said.

“With due respect sir (Segun Oni), the problems that are coming from the management of APC, as regard the National Assembly, we are facing challenges, we have tried time and time and we have to try to consolidate this party.

“What Prof. Sam Egwu said is a reflection of what is happening, the management must solidify the party. With your experience, experience of the national chairman as a former governor and former permanent secretary he has no reason to fail.

“You have the credentials to succeed, if you want to exonerate yourself put the right people in the right place.

Speaking in an interview shortly after the event, Masari said the expectations of Nigerians were for the House members to sit down and reconcile themselves.

Also speaking while assessing the activities of the APC leaders’ intervention in some of the crises rocking the party and the expectations from the amendments to the Electoral Act, a member of the PGF Legislative Programme, Prof. Egwu, said the party must be properly governed, adding: “The party was properly governed before the last general election but the table has turned around and I won’t suffer any damage for saying this.

But as the APC leadership debated on their input to the amendment of the Electoral Act, it emerged that the APC governors have openly disagreed with their members in the National Assembly on whether primary elections should be conducted for the selection of deputy governors or not.

The disagreement came during a discussion on the issue at a PGF expert session on electoral reforms.

Speaking on some of the proposed amendments to ensure that the Electoral Act provides a level playing field, an APC member and the House Committee Chairman on Electoral Matters and Political Parties Affairs, Hon. Aishatu Jibril Duku, canvassed for the inclusion of a clause in the Nigerian Constitution directing political parties to conduct primaries elections for the selection of deputy governors.

But reacting to the proposal, Masari said such move would lead to chaos.

He said: “Well, we don’t want it. If you conduct elections for deputy governors you also end up conducting a primary election for a vice-president and vice-chairmen – there will be confusion.

“The issue is very clear, there has to be one leader at a time, you don’t join two heads together. If you have two heads, one will be crying and the other one clapping.”

Meanwhile, the Deputy National Publicity Secretary of the APC, Mr. Timi Frank, has slammed Abdumumuni for flouting the party’s order to stop making public statements on the alterations made in the 2016 budget.

The APC Deputy National Chairman North, Senator Lawal Shuaibu, had ordered Abdulmumuni not to make further comments on the lingering budget feud in the House.

But since the directive was issued, Abdulmumuni has made further allegations against the House speaker, including that he (Dogara) had connived with two serving governors and ex-lawmakers to block him from meeting with President Muhammadu Buhari on the budget feud.

In a statement yesterday, Frank accused Abdulmumuni of being disrespectful to the Lawal committee, which the APC spokesman said had been working “tirelessly to resolve the crisis”.

“It is now obvious how disrespectful, mannerless and desperate Hon. Abdulmumuni can be even to the leaders of our party which include the National Deputy Chairman, North, National Secretary, National Treasurer and others who have been sleeplessly working to ensure that peace returns to the House.

“But if Hon. Abdulmumuni does not have respect for Speaker Dogara as a person, it is expected of him to respect the Office of the Speaker, the number four citizen of our party and the country.

“Abdulmumuni should also be told that he has clearly shown disrespect for President Muhammadu Buhari who is the leader of our party by this singular act.

“It is high time Hon. Abdulmumuni keeps quiet and stops this public show of shame before his excesses are made known to Nigerians and the whole world,” the party warned.

The APC spokesman reminded Jibril that his continuing show of “shame does not only stop with him, but has a negative impact on the party, its members and the Muhammadu Buhari-led government”.

“He should also be aware that disobeying the party in this manner may attract sanctions if the party deems it fit,” he warned. 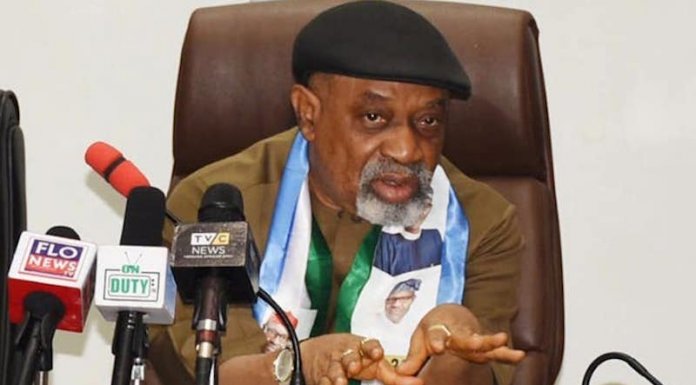