Iyobosa Uwugiaren in Abuja, Obinna Chima and Nume Ekeghe in Lagos
The Emir of Kano and former Central Bank of Nigeria (CBN) Governor, Alhaji Muhammad Sanusi II, has said the flexible exchange rate regime recently introduced by the central bank is not being fully implemented, just as he warned that targeting a pegged rate will not resolve the current forex problem.

He urged the central bank to allow the forces of demand and supply to determine the true value of the nation’s currency, in line with the flexible exchange rate policy.

He said this at the Risk Managers Association of Nigeria’s (RIMAN) annual conference in Lagos yesterday.

“There is a fantastic document by the central bank on the flexible exchange rate. We need to implement that document properly. So long as the implementation is not total and faithful to the document itself, you would have residual market risks.
“You have to let the market decide where the naira is going to be, to start with, before inflows come in and then when the inflows are in, you have an appreciation of the naira.

He, however, pointed out that with the new forex policy, the central bank has been able to reduce the arbitrary opportunities in the market as well as improved its liquidity situation.

Speaking further on the current economic downturn and comparing it to the 2008-2009 situation, he said the volatility in the commodities’ market was worse then, compared to the current situation.

But the Emir of Kano said the country was able to mitigate the shocks due to the savings in the excess crude account (ECA) at the time.

“The situation going on today is very sad because we ought to have learned from our past experience. In the global crisis of 2008, which started from the financial markets and then hit the commodities market, the Nigeria financial system was badly affected, precisely for reasons similar to the reasons we have today.

“But 2008-2009 was much less severe than 2015-2016 and the reason was that prior to 2008, the government of former President Olusegun Obasanjo had built up buffers in the excess crude account and therefore the economic management authorities, both monetary and fiscal, did have some flexibility in their pursuit of countercyclical fiscal and monetary policies.

“It was possible to draw on a huge pool of reserves to mitigate the impact of a collapsing currency and to continue to fund imports and to also fund an expansion of government spending.

“In 2009, the CBN and the Minister of Finance took the decision that the oil price shock would be absorbed by nominal variables. We preferred that the exchange rate and nominal prices took the shock than the real economy.

“But what seems to have happened in 2015 is that the government took the decision to allow the real economy take the shock, while protecting nominal variables in terms of the exchange rate and that was the wrong choice to make.
“You do not absorb the real shock of the real economy, it is bad economics.

“As a country, in the years 2010 to 2014, we had a golden opportunity to have learned from the experience of 2008-2009, so that when oil prices went up to prepare us for when the prices went down, but we refused to learn and we refused to listen which is the situation that this administration has inherited – oil prices have gone down and there are no savings.

“The problem as I see it is that very difficult decisions have to be taken. Some of them have already been taken. But all the money we spent on subsidy was keeping the refineries open in Europe.

“If a small fraction had been spent on building domestic refineries, we would be totally independent of the external world for imports. We would be exporting refined crude. The economy would have been immune significantly from the shocks of falling crude oil prices,” he said.

The emir also urged the federal government to create an enabling environment to encourage foreign and local investors.

He said: “We are today in a situation where clearly the government does not have money. Oil prices have dropped, oil output is low because the Niger Delta Avengers is targeting the energy security of the country and the revenues of the government.

“At this point in time, the government needs to make it very clear that it recognises that economic development and investments in infrastructure can only come from the private sector.
“The risk we run is that we may send the wrong signals to the private sector because some statements that are made would suggest that the private sector is not welcomed.

“And if you don’t have the private sector committed to investing – local direct investment and foreign direct investment in the economy – the government simply cannot do it alone. It needs them to come in and build refineries, roads and invest in other critical infrastructure,” he said.

Buharinomics Leaves a Lot to be Desired
In a related development, a report called the Buharimeter has shown that the president is performing poorly in the handling of the economy.
The Buharimeter, a report put together by the Centre for Democracy and Development, which conducted a survey by reaching out to civil society groups, the citizenry, the media, academia, political parties and other stakeholders to assess the performance and implementation of promises made by Buhari and the APC government, has stated that the economy of the country is a cause of concern across the six geo-political zones of the country.

The Buharimeter showed that respondents rated the Buhari-led administration very low on its economic policies, with 61.8 per cent of Nigerians saying that the government had either performed poorly or very poorly in the management of the economy. While only 10.2 per cent said it had done well in managing the economy; 23 per cent gave it a fair rating.

According to the report, “In the past 12 months, Nigeria’s gloomy economic outlook has become a source of serious concern to citizens. Within the period under review, the economy decelerated to its lowest level since the return to democracy in 1999.

On security, the report said a vast percentage of Nigerians expressed strong faith in the capacity of Buhari to manage the state of insecurity in the country.
“Most of the respondents (78.1%) agreed that the promise and efforts to improve the working conditions of the security services, including an increase in salaries, are a good approach to tackling insecurity in Nigeria,” the report added.

“As in the other cases, fewer respondents (58.5%) see this measure as capable of solving the insecurity in Nigeria. Although the Buhari administration received an average rating on its performance in the area of security, only 34% of the respondents reported that the administration met their expectations with regards to improving the security situation in Nigeria,” the report further stated.

The Buharimeter added that the majority of the respondents (66%) do not feel satisfied with efforts so far and want the government to do more to improve security, saying the enormity of the security challenges facing Nigeria, the need for urgent solutions and the high expectations on the Buhari administration were probably the main reasons for the disappointment expressed by the respondents.

Still in the report, some parts of the country observed with serious concern the swelling incident of attacks attributed to Fulani herdsmen, especially in the North-central region, the resurgence of militancy in the Niger Delta, and the agitation for the Republic of Biafra in the South-east.

The Buharimeter also showed that the perception and expectations of the Buhari administration’s war on corruption varies among the six geopolitical zones.
For instance, in the North-west, Buhari’s geo-political zone, 60.2 per cent said his war on corruption in the last one year met their expectations, while 37.2 per cent said the president should do more.

The South-east is followed by the South-south region, where 20.4 per cent of those surveyed said that Buhari’s anti-corruption campaign fell short of expectations.
The report further analysed other anti-corruption related campaign promises and policies taken by Buhari in his first year in office. For instance, it noted that the president partly fulfilled his promise to publicly declare his assets.

The Buharimeter further said that the president’s anti-corruption campaign had been dulled by the popular claim that it is lopsided and targeted at the members of the Peoples Democratic Party (PDP), and had failed to adhere to the rule of law.

S’Africa Closes in on Nigeria
Meanwhile, a report by Bloomberg yesterday stated that Nigeria was still Africa’s number one economy, even after a 30 per cent devaluation of the naira last month knocked almost $150 billion off its gross domestic product when measured in dollar terms.

However, South Africa, which has regained second place after overtaking Egypt, is closing the gap between itself and Nigeria.
While its economy also shrank as the rand weakened, the gap with Nigeria has narrowed to $60 billion now from $170 billion at the end of 2015.

A Bloomberg chart showed that Nigeria’s GDP has shrunk to about $350 billion from almost $500 billion at the end of 2015, while South Africa’s GDP also fell from about $330 billion in 2015 and is currently put at about $290 billion. 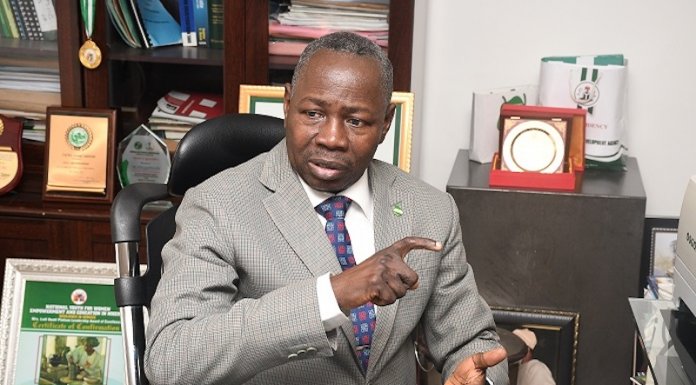