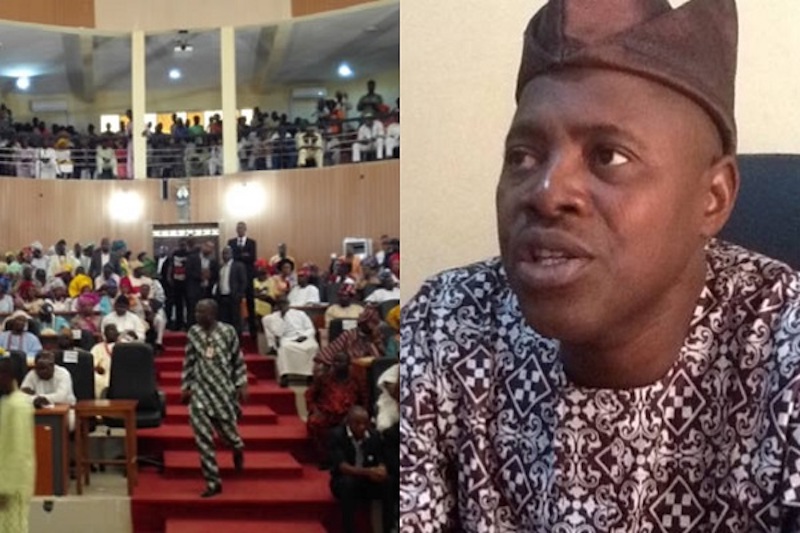 Victor Ogunje in Ado Ekiti and Udora Orizu in Abuja

Tension rose yesterday in the Ekiti State House of Assembly and environs, as 17 out of the 25 members of the state legislature impeached the Speaker, Hon. Gboyega Aribisogan.

The situation was however pulsating around the assembly, yesterday, as all the roads leading to the legislative arm were cordoned off by anti-riot and anti-bomb squads of the Ekiti State Police Command, as hordes of thugs openly abusing hard drugs and brandishing lethal weapons thronged the environ.

Stern-looking policemen prevented journalists and staff of the assembly from entering the assembly complex, with no fewer than 10 Hilux vans and anti-explosive vehicles stationed strategically around the assembly.

For the emergency plenary that held between 6.30am and 9.30am, the lawmakers impeached Aribisogan, while also suspending six of his allies.

After departing from  the Assembly, the lawmakers visited the APC Secretariat in Ado Ekiti, to pay homage to the leadership.

Addressing Journalists during a visit to the party’s secretariat in Ado Ekiti to introduce the new leadership, Adelugba appreciated the party for not allowing its name to be dragged in the mud despite the tension elicited by the power tussle in the assembly.

Adelugba said what transpired at the assembly was the indefinite suspension of Aribisogan and six other lawmakers, for allegedly sabotaging the passage of the revised 2022 supplementary budget presented by the executive.

The lawmaker disclosed that all the standing committees of the House, had been dismantled, while a new leader of Government Business, Hon. Bode Oyekola, was elected to pilot the affairs of the House.

“We have also appointed a  chairman, House Committee on Appropriation as part of what we did today at the plenary. Let me say that the Assembly is ready to pardon as many of them that are ready to join us. This is about the party and not the Assembly. The action we took today had nullified the first election that produced Aribisogan.

“In the last election, Aribisogan claimed he had 15, but today, I have 17 lawmakers behind me. Many of the lawmakers said they didn’t vote for him, but he compromised the election.

“I  thank our leaders, Biodun Oyebanji, Kayode Fayemi and Adeniyi Adebayo for playing strong leadership role. I want to say that this is the real members of the House of Assembly and we have chosen the real speaker.

“The late speaker was  like a father to me, I will continue where he stopped. I want to assure you that you will enjoy the peace you enjoyed under the late Speaker,” she said.

“This is the  happiest day of the party. We thank you for the way you conducted yourselves. Some believed the end has come to the House, but you were able to manage the crisis effectively. We read many things that people thought would demean our party. But you demonstrated that we can still have a strong House of Assembly after all this.

“Nobody ever imposed anybody on you. You are adults and enlightened people, very robust minds. Today, we are celebrating the return of peace in the House of Assembly. We do not want division. We will continue to play that fatherly role you have placed on our shoulders.

“With understanding, we will continue to resolve whatever crisis that  comes to us as a challenge. Please, you have supported the last government and we want you to stretch same to the present government of Biodun Oyebanji,” Omotoso said.

Meanwhile, Aribisogan, has alleged that some prominent personalities in his state, who were not happy over his emergence as the speaker, were plotting to kill him and other lawmakers that voted for him.

Aribisogan, who made the allegation while addressing journalists in Abuja, accused a former governor of being the brain behind the plot and also sponsoring some lawmakers to impeach him.

According to him, the former governor was against his emergence, despite him being loyal to him as the majority leader of the House, when he was governor.

While calling on the Inspector General of Police, Usman Alkali Baba, to Intervene and save democracy in Ekiti State, the Speaker further alleged that they were looking for the 15 members that voted for him, to be chased out of their communities and Ekiti.

In another development, he has described his impeachment by the lawmakers opposed to him as a nullity, bragging that he remained the leader of the Assembly.

Aribisogan condemned the gestapo manner in which his impeachment  was allegedly done, saying such would be subjected to judicial scrutiny to save democracy from total collapse.

Alluding to the action taken against him as a flagrant violation of the extant rules and the Assembly’s Standing Order, the embattled lawmaker said, “In view of the foregoing, we hereby call on the Government and people  of Ekiti State and all constituted authorities to note that Rt. Hon. Olugboyega Aribisogan remains the Speaker of the Ekiti State House of Assembly.