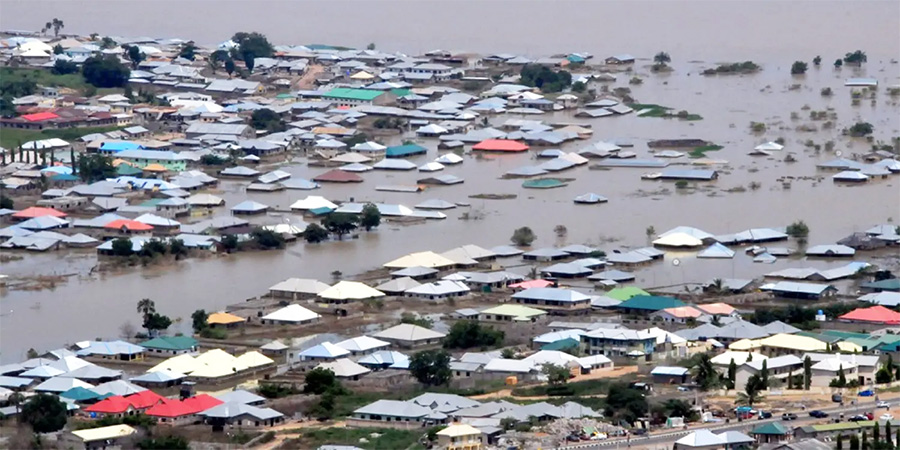 A report by Northcourt, a real estate investment solutions company, on the effects of flooding in the real estate sector has predicted, “a rise in insurance claims and an increase in premiums for properties in flood-prone areas.”
It also projected an increase in, “public capital deployment to infrastructure and housing.”
The report, which was titled “When Deep Water Rise: The impact of the floods on the Nigeria Real Estate Market,” obtained by THISDAY at the weekend, also projected that, “international investors will likely take a wait-and see approach for the short to mid-term.”

It added that, “industrial and retail real estate are likely to experience pressures due to food and local produce shortages.”
The report further stated that the possible short, mid and long-term impacts of the recent flooding on the Nigeria real estate market would include reduced demand for real estate as its investment worthiness is questioned.

Other short-term impacts of the flood on the real estate, according to the report, would also include reduced pricing in real estate as demand slows while increasing, “investment in makeshift accommodation/IDP camps and relocations to unaffected areas.”
It stated that, “on the flip, locations not impacted may see an increase in demand and rental pricing due to relocations from flooded areas, but this is not likely to impact capital values.”
The report also foresaw in the medium term an, “increased reconstruction activities with a focus on infrastructure such as drainages, reticulation and power services,” as well as “increased awareness to flood and the devastating impact of natural disasters may inform new construction practices such as foundation and roof styles.”

Commenting on the long-term impact of the flood on the real estate sector, the report envisaged, “investment in research and deployment of technology to track, warn and curtail similar natural disasters.”
Moreover, “certain locations will experience gentrification and/or improved quality of build,” while improved infrastructure in rebuilt locations “will experience a surge in demand and consequently capital values.”
It stated that institutional investors, both foreign and local, “will take a cue from the short to midterm responses of public leaders and agencies related to infrastructure and housing development.”

The report further stated that beach erosion and coastal land flooding could increase the expense of preserving impacted coastal towns.
“This is just one of the effects of flooding on Nigeria’s real estate market. In the end, this could affect residential settlements, commercial assets, infrastructure development and tourism related income in cities like Lagos, Uyo, Lokoja, Dutse, Port Harcourt and Yenagoa.”
It added that more surface runoff would be anticipated in city centres with densely developed areas because in developed environments with paved areas, roads, and other structures hinder rain from penetrating the soil.
Therefore, “large amounts of surface water can be produced by prolonged or heavy rains, which can overwhelm drainage systems and raise the danger of flooding.

“Flooding and severely damaged buildings and other structures in the built environment will need accelerated construction contracting activity.”
The report stated that priority areas for construction activities would include the damage done to sewer and sewage infrastructure that would lead to increased water pollution and the spread of disease.
“This will put more pressure on healthcare real estate. The majority of city residents will be required to leave their houses due to severe floods and property destruction. This might increase domestic migration and put pressure on the government’s ability to respond to emergencies and provide humanitarian aid.
“Floods will also have a severe effect on agricultural fields, further complicating the nation’s ability to feed itself and sustain broader economic growth.”
But, the report highlighted that experts have proposed building detention basins in states including Kebbi, Niger, Kwara, Nasarawa, and Edo.

“These are man-made reservoirs for storing floodwater from the wet season to utilise it in the dry,” it added.
It further noted that the Jabi Lake in Abuja was an illustration of a man-made earth dam with a total surface area of around 1,300 hectares built by Julius Berger and currently used for tourism with the 27,000sqm Actis-backed Jabi Lake mall in the back ground.
The report noted that more than 1.4 million people have been affected and 790,254 have been forced to relocate due to flooding, which has caused havoc in 34 states.

Just as over 140,000ha of farmland was either destroyed or damaged by floods, partially or fully damaging 200,000 houses. At least 2,000 people were displaced in Adamawa State with the Demsa, Numan, Shelleng and Lamurde areas cut off by water.
The Adamawa State Emergency Management Agency (ADSEMA) confirmed that 171,000 people were affected and 450,000ha of farmland was swamped. The affected areas in Anambra State include Ogbaru and the IDP Camp in Atani where infrastructural damage is extensive and Onitsha Harbour Industrial Estate. The Nigerian navy chipped in support for the flood victims around the Okogbe-IhiukeAhoada axis on the east-west road linking Bayelsa, Rivers and Delta States.

Jigawa recorded an estimated 91 fatalities (the most from a single state), 68,883 displacements, and 166,076 affected people, according to data from the National Emergency Management Authority (NEMA) as of the end of October, while Anambra recorded 77 fatalities, 526,215 residents displaced, and 729,046 affected people. 15,634 hectares of farmland and 2,765 homes have both been destroyed in Anambra State.
In Bayelsa, all eight local governments were flooded, 27,213 houses were affected and 46,143 hectares of farmland were destroyed.
An estimated 66,572 hectares of farmland were destroyed in Port Harcourt, Rivers State, which affected 121,276 residents. While the core city was spared many salt-water villages in the outskirts were affected, forcing a fresh wave of rural-urban migration.

“In Bayelsa, all eight local governments were flooded, 27,213 houses were affected and 46,143 hectares of farmland were destroyed,” the report said.