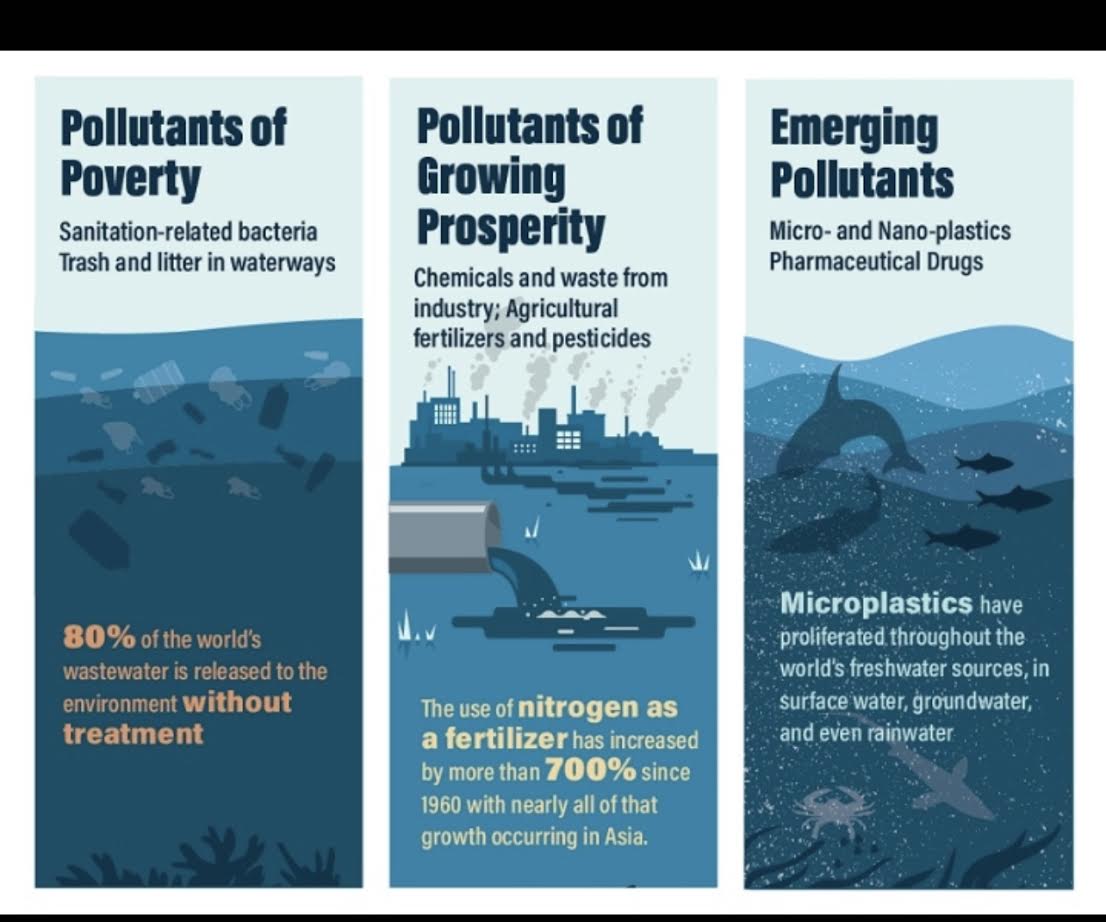 Considering the rate at which human’s anthropogenic activities has over the years affected the Gulf of Guinea ecosystems, the latest result from research expedition sponsored by the Partnership for Observation of the Ocean (POGO) in collaboration with the Nigerian Institute for Oceanography and Marine Research in the region, has shown high level of Uranium and Arsenic contaminants within 150 nautical miles, writes Oluchi Chibuzor

The need to continue to observe the resultant devastating effects of human activities in the ocean, especially in the Gulf of Guinea (GoG) has once more become imperative in view of the latest scientific data from oceanographic expedition research undertaken by the Nigerian Institute for Oceanography and Marine Research sponsored in Partnership for Observation of the Ocean (POGO).

This is coming as human population is predicted to reach nine billion by 2050 and people are turning with growing urgency to the ocean for answers to the greatest challenges facing the world, such as feeding the world’s growing population, providing clean energy to power vibrant economies; increasing resilience to dangers from the sea; and mitigating and adapting to climate change.

Suffice to say that healthy oceans and seas are essential to our existence as they cover 70 per cent and yet mankind has managed to do tremendous damage to these precious resources. This falls under the United Nations Sustainable Development Goals (SDGs) number 14 ‘Life Below Water’, which is anchored on conserving and sustainably using the oceans, seas and marine resources for sustainable development.

This also means that we must protect them by eliminating pollution and overfishing and immediately start to responsibly manage and protect all marine life around the world.

Speaking at a two-day workshop to deliberate on the outcome of POGO project on acquisition of oceanographic data in the GOG which was carried out in 2021, the Executive Director, NIOMR, Prof. Sule Abiodun, said, the exercise was conceived to facilitate establishing a regional oceanographic data bank.

He explained that the data bank is needed for studies of oceans, climate conditions and their influence on regional climate and sustainable management of living and non-resources within the GOG.

He noted that the ocean renders enormous ecosystem services to humanity especially to the increasing population of coastal states bordering the GOG.

According to him, “the ocean is confronted with stressors that threaten its ecosystems, adding that there is therefore a need to address this in order to achieve sustainability through consistent observation.

“In December 2020, POGO in conjunction with NIOMR commissioned a project at collecting oceanographic data which was eventually carried out in January 2021 from the GOG to better understand the dynamics of the ocean waters within the region. POGO also brought together early career scientists from five African countries namely, Cote’ivore, Benin Republic, Ghana, Togo and Nigeria. This was the view of enhancing capacity building in the field of oceanography.”

However, he stated that as part of the partnership, career scientists were taken through detailed lecture, laboratory analysis, and instrument handling after which “they embarked on a oceanographic expedition to collect data in the GOG onboard our vessel RV Bayagbona.”

He continued, “The workshop would enable stakeholders to discuss various oceanographic data acquired, positivity of data and the way forward in ensuring continuous partnership with relevant stakeholders. The presentations by our scientists on the aspect of scientific oceanographic parameters and processes will elucidate areas of concern for the ocean decade action between year 2020 to 2030 and also address specifically the SDGs goal 14 of the United Nation.”

Expressing optimism on the insights from the data gathered from the expedition, the ED also stated that he looked forward to intuitive, vibrant and groundbreaking discussion among the participants.

“Let me at this point thank POGO and its partners for their support in ensuring the success of the project and will look forward to more collaborations with POGO with instrumentation of POGO’s mandate, that is innovation in ocean observation, capacity development and outreach and advocacy,” he said.

Meanwhile, for POGO, the present ocean’s state cannot continue and “humanity needs to find ways to manage more effectively its relationship with the ocean, coastal seas and estuaries so that future generations can benefit from it as we do.

POGO affirmed that there must be a continuous effort to be aware of how and why the ocean is changing and better predict the impacts of the ocean on people and of people on the ocean.

According to POGO “To this end, making continuous ocean measurements and observation with global coverage is now a pressing priority, which must be done to manage a safer, more sustainable relationship between people and the ocean. That is why major ocean research institutions of the world have come together to form the Partnership for Observation of the Global Ocean (POGO).”

POGO, founded in 1999 by directors of oceanographic institutions around the world as a forum to promote and advance the observation of the global ocean, has over the years in its mission continued to promote interest in the ocean by funding a research expedition to understudy the micro benthic situation of the region.

This is because the group believed that collectively they have the capability to succeed.

According to POGO, “Enabled by rapidly advancing technological innovations and that working together there is now a real prospect, over the next decade, of making major strides forward in building the truly global ocean measurement system needed to understand and monitor the ocean for the benefit of all.

“The expedition is because GoG hosts many distinct ecosystems, among which is the Guinea Current Large Marine Ecosystem extending from the intense upwelling area of the Guinea Current in the north to the Benguela Current in the south. Dotted along the relatively wide continental shelf of the GoG are several lagoonal/estuarine systems including adjacent coastal marine waters that provide livelihood benefits i.e., nutrition and jobs to deprived communities living around them.

He maintained that from the World Bank report in 2020 it was estimated that $900 billion per year of resources globally are tied to the ocean through fishing activities, tourism, exploration of oil and gas, and mining of minerals.

He stated that about 80 percent of the biodiversity globally is tied to the ocean and it is also important to note that about 3000 pharmaceutical products are extracted from plants and animals from the ocean.

According to him,  “The ocean also contributes enormously to the entire ecological balance of our atmosphere, but there are stressors to the ocean globally.

“What are these stressors? We know that ice caps are melting, forcing sea level rise, fisheries resources are depleting consistently, spontaneous oil spills globally damaging the environment, massive coastal erosion all over the world, more powerful storm surges resulting in phenomena like tsunami.

“In some locations there are incidences like El nino, which is spontaneous change in temperature and salinity that causes massive fish cake and the ocean is acidifying because of the indiscriminate use of fossil fuel causing entire alteration of the carbon chemistry of the ocean. So, to preserve the ocean we need to consistently monitor and observe the parameters in the ocean to be able to understand these processes I have listed before.  That is why essentially we are here.”

He equally explained that, “In December 2020, there was a multilateral cruise sponsored by POGO involving researchers from other West African sub-regions and the institute was at its best and provided the research vessels with which the cruise was undertaken and It was very successful.

“POGO, we partner with them and other researchers from the West African region. We went to sea and observed and we collected data and interpreted the data. It is the data we would look at today and see how we will continue to protect the ocean for sustainable development.”

Encompassing 17 countries from Senegal to Angola, the Gulf of Guinea is richly endowed with vast reserves of hydrocarbon, mineral like diamond, tin and cobalt, and most importantly fisheries resources, making it a strategic area.

While not a major international shipping route, the Gulf of Guinea represents 25 percent of African maritime traffic and has nearly 20 commercial seaports.

Presenting the findings of the data collected from the GOG, Unyimadu said: “There are a lot of anthropogenic activities that have been affecting our ocean.”

He further said that things like the melting of the ice caps are causing sea level rise, depleting fisheries resources as “massive oil spills into the ocean, algae bloom, beach pollution and recently because of the use of fossil fuels the ocean is acidifying causing change in the carbonate chemistry.

On the implication of the results to the countries within the GOG, Unyimadu opined that it is to analyse completely and give recommendations to POGO on the way forward and it will definitely involve further investigations.

On the position where these contaminants were found, he responded that the locations are in coordinates.

“Is about 150 nautical miles within the GOG. We will make our recommendations to POGO and there is a possibility of another cruise to confirm those investigations,” he replied.

Others are Organochlorine pesticide (OCPS) Evaluation in Sediments Core collected during Gulf of Guinea Project: Level, Fate and Ecotoxicological Risk; Acquired pH, Alkalinity and Chlorophyll-a Data during the GOG Project; Abundance, Diversity and Distribution of Plankton along the Western Nigeria Offshore and Study of the Culturable Bacteria Community in the Gulf of Guinea off Western Nigeria Coast.