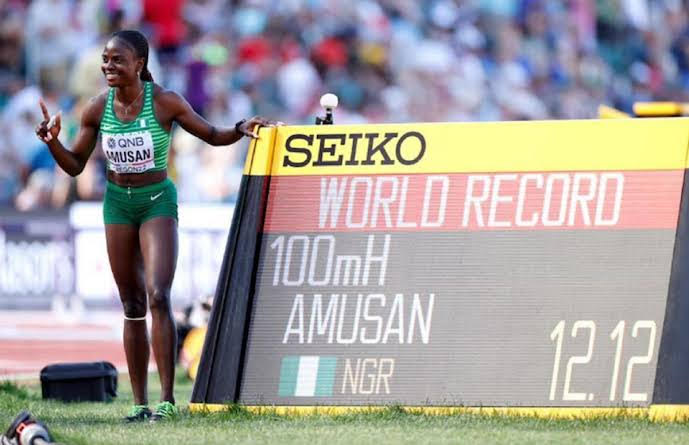 The women’s world 100m hurdles record of 12.12seconds set by Oluwatobiloba Amusan at the World Athletics Championships in Eugene, Oregon, USA on July 24, 2022 has been ratified.

The World Athletics announced in a statement yesterday that the world record, along with two others by Mondo Duplantis (6.21m in men’s pole vault) and Sydney McLaughlin’s 50.68 (in the women’s 400m hurdles) are all now officially in the record books.

Amusan who along with Ese Brume were last week conferred with the Officer of the Order of the Niger (OON) National Honour by President Muhammadu Buhari, scorched to the new record in the women’s 100m hurdles semifinals at Oregon 2022.

After clocking an African record of 12.40secs in the 100m hurdles heats, the world was put on notice that 25-year-old Amusan was capable of something special. That she did in style in the semis with the world record.

Although Amusan  further lowered the record to 12.06secs in the final, she was unfortunately denied the new time as it was achieved above the legal wind recorded at +2.5.

World famous Jamaica’s Britany Anderson (12.23) and Jasmine Camacho-Quinn (12.23) of Puerto Rico who were favorites for the gold played second fiddle to the Nigerian to settle for the silver and bronze medals respectively.

Speaking shortly after setting the world record, Amusan stressed the time was not her priority but the gold medal.

“The goal was to come out and to win this gold,” she said. “Honestly, I believe in my abilities, but I was not expecting a world record at these championships.”

She also claimed the Diamond League title to further extend her reign over her sprint hurdles rivals.

Amusan repeated her gold medal feat at the Commonwealth Games in Birmingham last month with another Games record of 12.30 secs that was no where near the world record.

Only the Olympic Games gold medal is left for Amusan to complete everything that is there to win in her chosen sport.