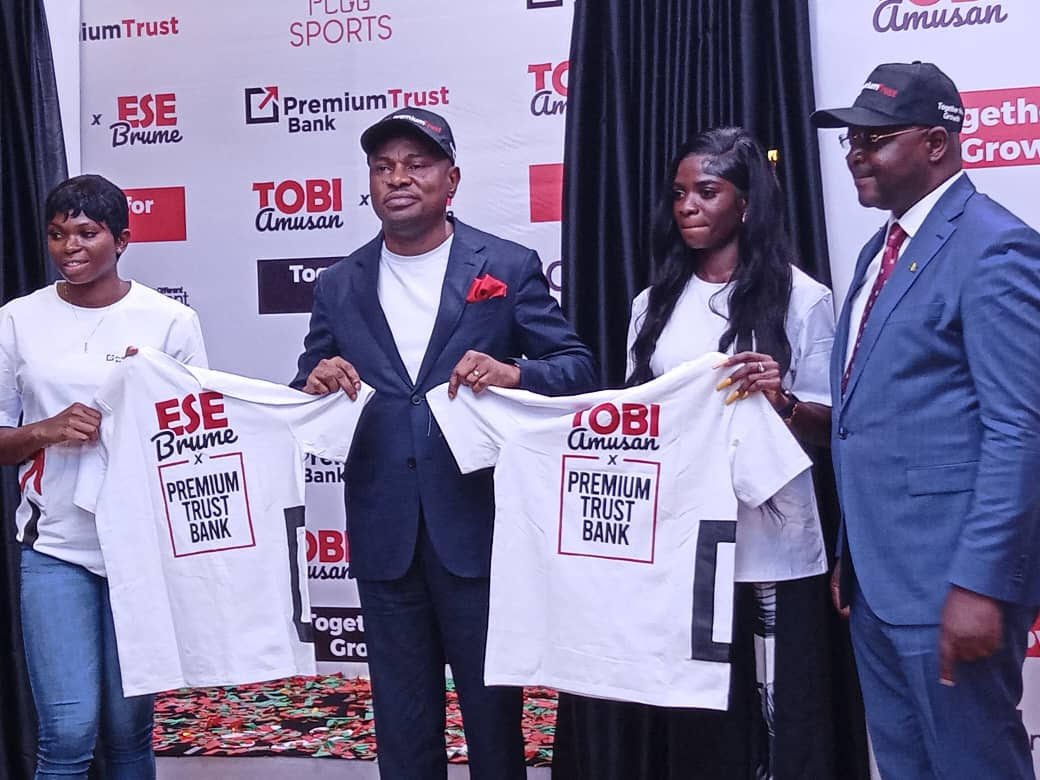 At the colourful ceremony which held at the Eko Hotel and Suites on Lagos Island, Amusan who recorded several firsts, culminating in her winning the World Athletics Championships in Oregon, USA with a new World Record in the women’s 100m hurdles as well as winning the Birmingham 2022 gold medal in her specialty and the 4x100m relay, was the toast of the event.

Along with Tokyo 2020 as well as Doha 2019 bronze medalists, Brume, the two foremost Nigerian athletes signed the dotted lines as Brand Ambassadors of the bank.

Speaking at the unveiling, the Minister  of Youth and Sports Development, Sunday Dare, said the two athletes signpost the future of the country’s athletes.

He also called on corporate organisations and individuals not to wait until the athletes are crowned champions before associating with them. He emphasized on investing on Nigerian athletes when they are young.

“These athletes never relent, always thrive, consistent in their performances,” the minister stressed.

“Even on the big stage, they knew they had it in them and they never stop and when the time came, they showed up big time. They showed up for themselves first having done the sacrifices, gone through the discipline, because if you have talents and you don’t add discipline to it, you cannot excel.

“I want to thank Tobi (Amusan) for doing that job in Oregon, not just breaking the world record, but breaking it twice same night. I am thanking you on behalf of this country, Nigeria. We are grateful,” observed the minister.

He also commended Brume for improving on the bronze she won at the Olympic Games in Tokyo at the World Championships in Oregon and the gold in Birmingham 2022.

“Brume on her part, most telling moment for me at the Olympics in Tokyo was when Tobi  finished fourth in her race. The only person that could comfort her was Ese. Not even her coach could do that. I am happy seeing the two of them here today, happy to see what they have attained so far.

“Ese came third at the Olympics, but to us, it was a Golden Bronze. Thank  you because when you came to the Commonwealth Games, you did it again.”

Also speaking at the unveiling, the MD/CEO of Premium Trust Bank, Emmanuel Emefienim, said the major goal of the bank is to support growth hence the maxim ‘Together for Growth’.

According to Emefienim, they decided to associate with the two renowned athletes to drive towards enabling growth they put into their story.

He added: “This should serve as motivation to other athletes who dare to be different and win, no matter their background, obstacles they have been through to get to where they are today.

“The two athletes’ story is just like the bank and I am happy with where we are today and we hope the partnerships bring great impact to the athletes, the sports industry and the country.”

The two athletes appreciated the bank for counting them worthy to be the Brand Ambassador and promised to maintain the standard expected of them.