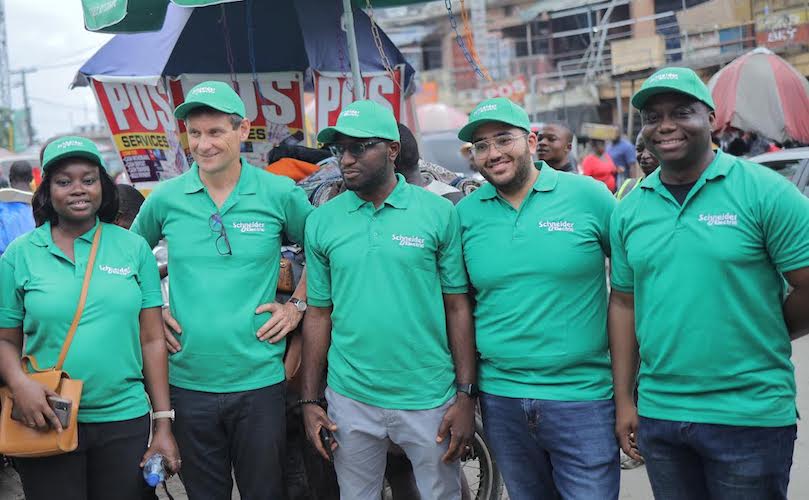 Schneider Electric’s innovative approach to fostering engagement with partners has continued to create a positive impact for the energy brand, Mary Nnah reports

The outreach programme, held recently was aimed at strengthening its relationship with partners  and the market community

The event which began as early as 11 a.m, extended to a full day of conversations and interactivity. The team moved from shops along the electrical lines in Alaba, gathering insights that will enhance their effectiveness in responding to challenges the community has been facing and cater to those needs while maintaining relevance and dominance over their competitors in one of Africa’s largest integrated electrical markets.

It was a movement that served to demonstrate Schneider Electric’s strong understanding of the power of local reach.

“For our team to be at Alaba Market is our way of saying we value grit, passion and drive and that’s the energy at Alaba International. It is our mission to ensure that our partners thrive, by understanding their needs and finding innovative ways to help them work smarter, more efficiently, and more collaboratively with us”, he noted further.  ,

The event attracted a captive audience, where several issues were discussed, to build a solid partnership with stakeholders in Alaba.

“Our goal is to meet people where they are and give them a chance to access the services they might need,” says Schneider Electric”, Begat added.

Amongst the numerous concerns addressed during the visit was the trade in counterfeit electronic products which often jeopardises consumers’ health and safety. Details of the locations of Schneider Electric’s authorized distributors in specific areas in Lagos, including distributors present within the Alaba market community were given, even as the team emphasized the importance of buying items directly from them and the benefits –  i.e discounts –  they stand to gain from building a consistent relationship with their distributors. They also tasked the community to report the actions of counterfeiters to put an end to illicit trade.

Also, discussing the challenges of the famous market, the traders spoke about the dilapidating infrastructure in and around the market, especially the access roads which are significantly affecting their businesses. A good road network can potentially increase the volume of sales.

Other highlights during the occasion include sharing of marketing materials to boost sales, sign-ups of new partners, and presentations on Schneider’s unique selling points, among other interactive features.

Some of the beneficiaries who spoke expressed their appreciation, saying that the visit was timely, as they also advocated for its sustainability.

The initiative which began in 2014 has been transformative for both partners and the company. Schneider says it will continue to invest time and resources to improve the welfare of the host community, which significantly contributes to the development, expansion, success and growth of small and medium-scale enterprises in Lagos State. Its commitment to making growth sustainable and equitable for all is derived from the strategy of staying ahead of the curve.