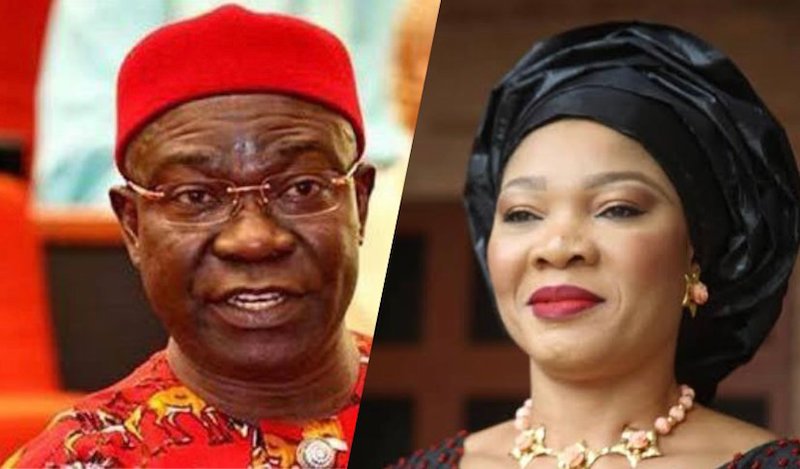 * Decides on country for trial July 7

For the second time a United Kingdom Magistrate Court yesterday denied Senator Ike Ekweremadu and his wife, Beatrice bail.
Although, the court had last week adjourned trial till July 7, following interventions the case was listed for hearing yesterday.

The Uxbridge Magistrate Court declined to admit the Senator and his wife to bail on the grounds that there was no such application before it.
The court had last week ordered the remand of Ekweremadu and his wife in custody shortly after they were both arraigned before the court on charges bothering on alleged modern day slavery and organ harvesting.

They were arrested by the Metropolitan Police for allegedly taking a child to the UK for organ harvesting, although the actual age of the said victim has been enmeshed in controversy.

Meanwhile, the Abuja Division of the Federal High Court fixed today for hearing of an application by Ekweremadu and his wife seeking some agencies and bank to release the bio-data of the victim which has been unveiled as one David Ukpo.

The matter which was assigned to Justice Inyang Ekwo it was learnt has been scheduled for Friday for hearing.
Ekweremadu and wife are seeking an order of court directing the Nigerian Immigration Service, National Identity Management Commission, United Bank of Africa (UBA), and Nigeria Inter-Bank Settlement System Plc to release the Certified True Copy (CTC) of the biodata information of David Nwamini Ukpo.

In the suit marked: FHC/ABJ/CS/984/2022, and filed June 27 by their counsel, Adegboyega Awomolo, the couple said the information were for the purposes of facilitating the criminal investigation and tendering same to establish their innocence with respect to Ukpo’s age in the charges against them.
The Metropolitan Police in a statement had said, “A woman and a man were charged today with conspiring to arrange the travel of a child into the UK in order to harvest organs”

However, upon their arraignment last week, the London Court had denied them bail on grounds that they are high profile persons and therefore flight risk.
The judge subsequently ordered their remand pending the commencement of trial on July 7.
However, following interventions for the case to be given accelerated hearing, they were yesterday brought to court where the judge denied them bail on the grounds that no bail application was before the court.

The judge also revealed that the case on the next adjourned date would be heard by a Westminster Magistrate Court because the UK Attorney General, Suella Braverman, would have to take a decision on whether to continue the trial in the UK or transfer to Nigeria, where the alleged crime originated.

Prosecutors had claim that David Ukpo, who alleged that he was coerced to the UK to donate his kidney to the Senator’s daughter, is 15 years.
The National Assembly has continued to see what they could do in the circumference.

President of the Nigerian Senate, Ahmad Lawan, had on Wednesday, disclosed that he has been in touch with the Nigerian High Commissioner to Britain, Alhaji Isola Sarafa, who provided some consular services that include the engagement of some lawyers who will defend Ekweremadu and wife.
A delegation has also been drafted by the Senate to visit London to see Ekweremadu and his wife.

Sarafa, two adults male children of Ekweremadu were reported to have witnessed Thursday’s proceedings.
In a related development, Governor Ifeanyi Ugwuanyi of Enugu State has expressed deep concern over the ordeal of the Senator representing Enugu West Senatorial District in the National Assembly and his wife.
A statement by the Enugu State Government described Senator Ekweremadu as an illustrious son of the state and a foremost Senator of the Federal Republic of Nigeria.

The statement disclosed that the government and the good people of Enugu State were saddened by the unpleasant news of arrest, arraignment and subsequent remand in custody of Senator Ekweremadu in the United Kingdom.

It, therefore, conveyed the thoughts and prayers of  Ugwuanyi and the people of the state to the entire family of Senator Ekweremadu, “in this difficult time as we beseech the most merciful God to grant accelerated healing to Miss Sonia Ekweremadu.”

The state government extended its profound gratitude to the federal government of Nigeria and the National Assembly for their empathy, support, solidarity and legal intervention.