Onobrakpeya at 90: A Season of Celebration Looms 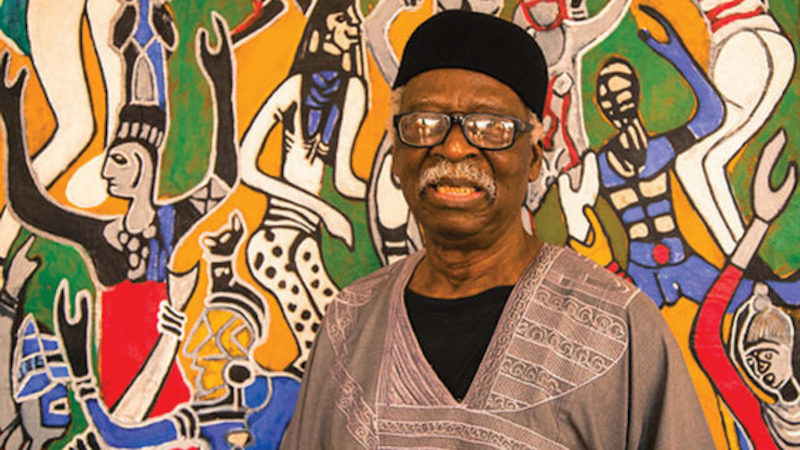 A season of celebration looms for the quintessential artist, environmentalist and art educator, Bruce Onobrakpeya as he marks his 90th birthday this year. At a recent press briefing in his Lagos studio, the planning committee for the celebrations revealed the series of events slated for the year-long programme.

Starting from June 24 in Abeokuta, an exhibition of drawings, mixed media and serigraphs by Olatunbosun Ojo would be held side-by-side with the commemoration of Onobrakpeya at 90 in collaboration with the National Gallery of Art, Oke Mosan. From August 4 to 6, the Bruce Onobrakpeya at 90 conference would be held at Onobrakpeya Art Centre, Agbarha-Otor, Delta State with support from Urhobo Historical Society.

The 24th Harmattan Workshop August Retreat which will start from August 7 to 20 has the theme “Bruce at 90: Probing Art on the Flip Side.” In Abuja, the celebration will be held at Merit House, University of Abuja, in the form of lectures and exhibitions of artworks. To give back to the art community, a gala night and fundraiser to raise funds for building classes at Agbarha-Otor will take place at a later to be announced venue sometime in October.

For the 2022 edition of the Lagos Book and Art Festival (LABAF), Onobrakoeya will be honoured with a series of conversations as well as mentoring sessions from November 14 to 20.

Mudare Onobrakpeya, the first son of the celebrated pioneering artist of the Zaria Rebel fame, described his father as a cultural icon, revealing why the celebration is significant.

“Baba’s works are among the most collected in almost all the countries in the world. His career span has made him a very important cultural icon in our discourse. He is a very important part of Nigerian history and the elite group Mbari Club in Ibadan. He was part of the FESTAC.

“In the 80s, he made his mark as a social commentator on the environmental degradation and ecological challenges in the Niger-Delta. We are celebrating him because his art offers hope,” he said.

Sharing his sentiments, Engr. Tayo Adetunbi, the co-owner of Orisun Gallery in Abuja who set off the celebrations for Onobrakpeya in Abuja also eulogised the legendary artist.

“Baba is a loving man and a caring father. People like him cannot die. His works keep living,” he said.

The celebration will continue in Atlanta in April 2023 when the High Museum in Atlanta showcases the ‘Christian Art of Bruce Onobrakpeya.’ These artworks mostly produced in 1968 will feature some black and white illustrations of prominent bible  characters and events from the artist’s perspective. A few masterpieces like ‘The Stations of the Cross’ and ‘Last Supper’ will be featured by the curator of African Art, Lauren Baeza.