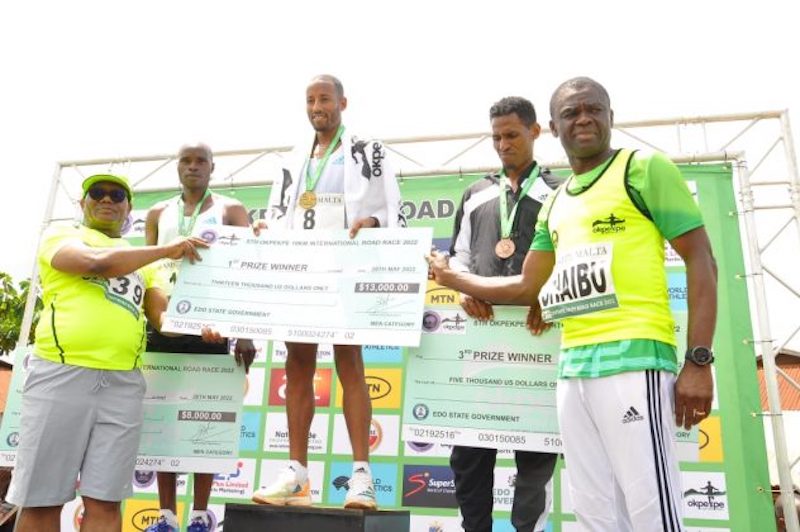 The President of Athletics Federation of Nigeria, AFN, Mr Tonobok Okowa has hailed the organization and performances of athletes at the just concluded 8th Okpekpe Road Race.

The AFN boss said: “We at AFN are happy that the race is not just back but better. I was scared that it might not come out well as we haven’t had it in the last two years, but it came better than it used to be. More so, Nigerian Athletes did better than they use to do. They all returned with their personal best time, which is a great improvement. And seeing the massive support from the local community, gladdens my heart.

“Going forward, AFN would advocate that all states should have one road race, so we can train more athletes and perform well at the international stage.”

In his reaction, Edo State deputy governor, Mr. Philip Shaibu, who participated in the VIP category noted that the state government is already taking advantage of the Okpekpe road race to domesticate some sports in parts of the state.

According to him, “In Okpekpe, the topography is good for marathon race and so the area has been mapped out for camping and training of long distance runners. Edo Central is for gymnastics while Edo South is for swimming. We are gradually domesticating and relocating sports to areas where they have comparative advantage and the people of that area can take advantage of opportunities those sporting activities brings.

Ethiopian duo of Jasim Haji and Dessie Adchiniau emerged winners in both male and female categories of the Okpekpe 10 kilometers Road Race.

In the male category, Jasim Haji finished with a time of 29:05 to come first, while Elvis Cheboi from Kenya ran 29:20 to come second and another Ethiopian, Derekek Mego came third in 29:30 minutes.