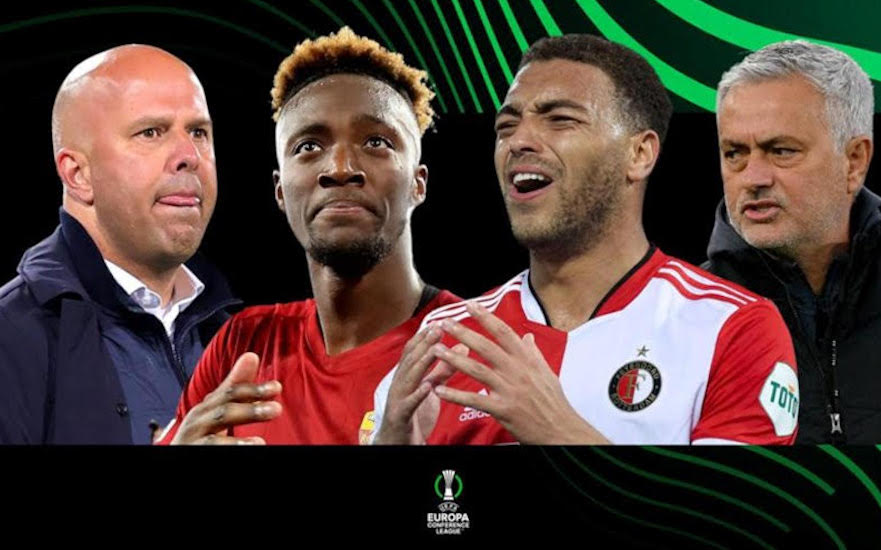 between Italian side Roma and Dutch team Feyenoord will be full of emotions for fans of Portuguese Coach, Jose Mourinho.

The former Chelsea boss who at 59 has won almost everything there is to win in club football can complete a set of current UEFA club trophies if his Roma side beat Feyenoord.

In addition to his many domestic titles, Mourinho has won the UEFA Cup and UEFA Champions League in successive seasons with Porto, before clinching the 2009/10 UEFA Champions League title at Inter Milan, and the 2016/17 UEFA Europa League crown with Manchester United. And so winning this new  third-tier trophy, will make mourinho, the only Coach in record books to have won all of UEFA trophies!

The ‘Special One’ as the Portuguese was known before his departure from Stamford Bridge, was full of emotions when in his preview of tonight’s final said:  “I am a manager with history and Roma are a big club. I felt a little bit of responsibility to try and make (the first edition of the tournament) a great competition. So, little by little, we went on to achieve our ambition of going as far as possible. Then, very proudly we saw that the two semifinals were played in packed stadiums, with (a total of) 170, 000 fans in attendance.

“The Conference League is our Champions League. That’s the level we’re at, the competition we’re playing in. The club hasn’t reached (an occasion) like this for a long time,” stressed Mourinho.

Roma have yet to win a major European trophy – they were European Cup runners-up in 1984 and beaten in the 1991 UEFA  Cup final.

However, before his dream of annexing the Europa Conference League title, Roma may need to do something to stop Nigeria and Feyenoord forward, Cyriel Dessers. The Super Eagles forward is the leading marksman on 10 goals and is hotly chased by Roma’s Tammy Abraham just one goal less. Dessers who is on loan at the Dutch club from Genk of Belgium, literarily powered Feyenoord to the final and remains very dangerous to Mourinho’s dream.

Though Tammy was capped by England’s Three Lions, he has same Nigerian ancestry as Dessers. Nigerian blood runs in the veins of the top two marksmen that may decide where the pendulum of victory swing at the end of regulation time this evening.

Just like Mourinho, Feyenoord are also looking to complete the same set as the Portuguese: they won the UEFA Champions League trophy when it was still the European Cup in 1970, and picked up the UEFA Cup, now the UEFA Europa League, in both 1974 and 2002.

The Rotterdam side would thus be the first club to have had all three of the most prestigious men’s UEFA club competition trophies in their cabinet should they manage to dash Mourinho’s dream.