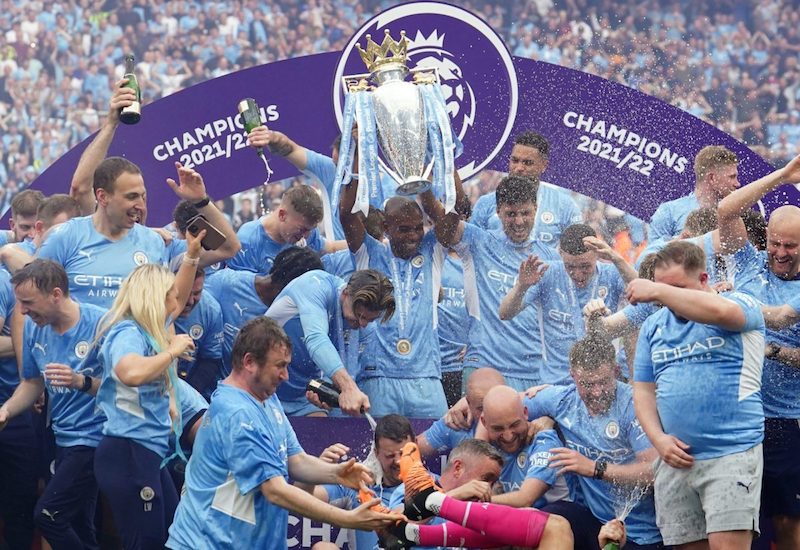 Manchester City survived a two-goal down to fight back to a 3-2 victory over a stubborn Aston Villa on the final day of the 2021/2022 Premier League season.

Three goals in five minutes brought City back from the dead and their fourth title in five seasons.

With Liverpool winning 3-1 at Wolves Pep Guardiola’s men revved up their firing power to refocus their sail on the way to retaining the title. It was indeed a dramatic evening at Etihad Stadium.

The prospect of ending the season empty-handed was real in the first 70 minutes of the game. Goals  from Matty Cash in the 37th minute  and Philippe Coutinho in the 69th put Villa 2-0 ahead and in firm control.

And at it looked as if Villa Manager, Steven Gerrard, might help his former club Liverpool secure the title. But City turned the game on its head in an atmosphere bordering on hysteria.

Ilkay Gundogan, on as a substitute for Bernardo Silva, gave City hope with a far-post header in the 76th minute, and Etihad Stadium was a wall of noise when Rodri drove a low finish past Villa keeper Robin Olsen two minutes later.

The title-winning recovery was complete with nine minutes left as Gundogan once again arrived at the far post to put City in front, the decisive contribution on this nerve-shredding final day.

City did need those three points as Liverpool beat Wolverhampton Wanderers – with City boss Guardiola overcome with emotion and breaking down in tears at the final whistle.

At the Emirates, Arsenal thrashed Everton 5-1 but it was too little too late, as they were pipped to the last Champions League place by their North London rivals Tottenham Hotspur.

A win for Arsenal against Everton while a defeat for Spurs at already relegated Norwich, would have seen them qualify for a first Champions League since 2017. But Spurs hammered Norwich 5-0 at Carrow Road to beat their bitter rivals and claim fourth place while Arsenal finished fifth.

Despite Manchester United’s 1-0 defeat at Crystal Palace, Brighton’s 3-1 defeat of seventh placed West Ham ensured the Red Devils qualified for the Europa League while West Ham are to play in the Europa Conference.

And in the relegation fight, Leeds stayed up after defeating Brentford 2-1 away while Burnley dropped to the Championship no thanks to a 1-2 home loss to Newcastle United.