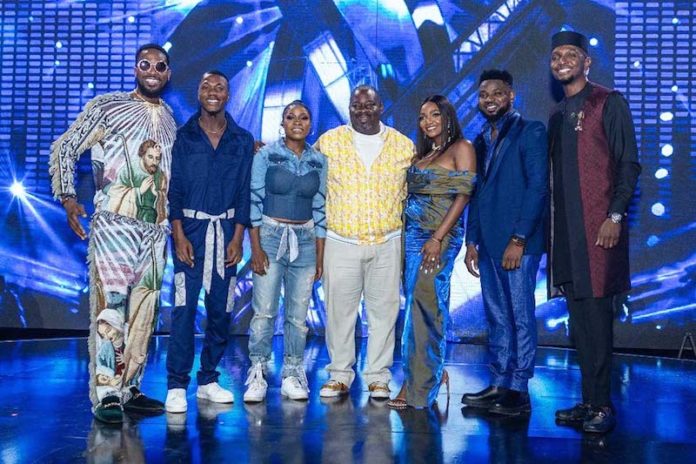 The exhilarating acts of the top three contestants of the Bigi-sponsored Nigerian Idol last Sunday elicited standing ovation and commendation from the judges as they had double performances each, with applause from the audience in the show which will climax with a winner on 22 May, 2022

The captivating rendition saw the contestants, Zadok, Banty, and Progress, performing two songs each, one from any time of release and the other on the year they were born, another twist that increased the excitement generated from the evening gig, but a moment of Jordan’s eviction, with low votes from the over 29 million recorded.

With the three contenders left in the battle for the Idol crown, the show had become tensed as each, according to the judges, has the musical prowess to get to the Grand finale that will lead to the clinching of the N100, 000, 000 worth of prizes, including a recording deal from a label, a brand-new Sports Utility Vehicle (SUV), cash prizes, and other exciting gifts.

Interestingly, the judges comprising Obi Asika, D’Banj, and Simi, stood while applauding the skills displayed by the contestants, as each of them performed electrifyingly to also get praises from the host, IK Osakioduwa.

Banty, who was the first to sing, came up with a stunning performance with Beyonce’s, “I Miss You,” which kept the judges standing and clapping for her good vocals and stage act, a situation that Asika exclaimed that she sang perfectly, while Simi stated: “it is the best I have ever seen.” Also, D’Banj enthused “that was phenomenal.”

The young singer’s second song, “I Wanna be Down” by Brandy, which was released in the year 1995 when Banty was born, was incredible. D’Banj stated, “I am glad you are among the three contestants, that was great”, while Simi avowed that it was impressive, and Asika, “I love what you have done.”

Zadok did his first song, “And I am telling you” by Jennifer Hudson and got the judges standing, clapping, with admiration for his outstanding act, that also shook the viewers, who stood yelling with joy for being entertained.

The 28 years old, who was described as a great singer by his super fan, in his second song, taken from “Boyz II Men’s ‘I’ll Make Love To You,” released in 1994 when he was born, made Simi remarked that it was astonishing, incredible, while D’Banj said, “I am an entertainer, and I must tell you that you are also one,” and Asika, “you have shown us what you know how to do very well.”

Progress sang “I Will Always Love You” by Whitney Houston, and got the judges over-the-moon with his vocals and stage performance, while his second song from Westlife’s ‘Swear it Again’ which debuted in the year 2000, when he was born, led to good comments from D’Banj saying “every time you are on stage, it is like a ministration,” because he was often referred to as a pastor.

Simi affirmed “that was cool and excellent,” while Asika said, “That was a demonstration of skills.”