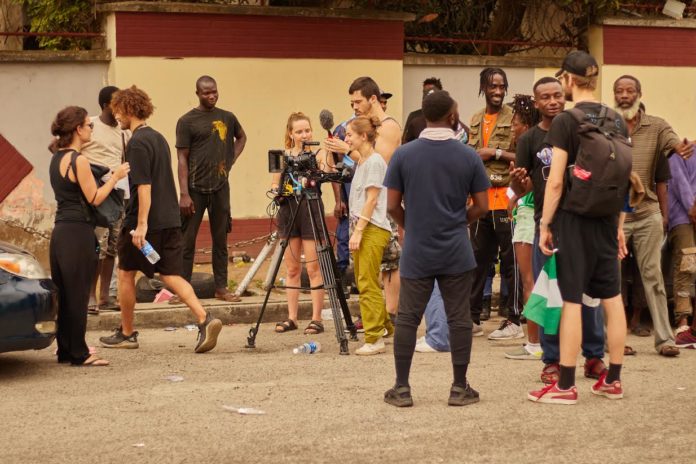 For three weeks, Afrinolly and Filmakademie hosted 11 young creatives from different nationalities to a first-of-its-kind Nigerian-German exchange program titled ‘The Nollywood Workshop’ in the bustling city of Lagos. The students who had a taste of the city had training sessions with filmmaker Ike Nnaebue, investigative journalist Tobore Ovuorie and screenwriter Kemi Adesoye. The sessions enabled them to get a grasp of Nollywood while working on a short film about the city.

In the first week of their arrival, the students had a meet and greet with Nnaebue who screened his latest documentary film on migration ‘No U-turn’ to the students. Ovuorie later took them on the topic ‘Live Experiences- African Narrative’ in a zoom session. She shared with the students a documentary about her work and true life experience regarding sex trafficking. Her session was followed by a workshop with Adesoye who engaged them in the topic ‘Scripting the Nollywood Narrative’.

These interactions helped lay the foundation for the students to embark on their short film.

By the second week, the students were already into the nitty-gritty of production. Roles were assigned and scripts were worked on, of course with the help of the facilitators. A significant part of the week was their participation at the iREP International Documentary Film Festival. Through a partnership with the co-founder of the festival Femi Odugbemi, the students attended the opening day of the festival at Terra Kulture where one of the students, Jubilian Ngaruwa’s short film, was screened. The last day of the festival saw the students visit the art place in Bariga as well as catch a glimpse of the slum areas of Lagos.

Shooting started fully in the final week and although they encountered some challenges, the students achieved their aim at the end of the day.

The exchange program is a continuation of  Afrinolly’s commitment to promoting cross-cultural collaboration through its relationship with Filmakademie. It is the first time the exchange program which has been ongoing for over three years will be held in Nigeria. The forum was intentionally put together to facilitate the future collaborations that will potentially be borne from the exchange program. This much was drummed to the students by Chike Maduegbuna, the CEO and co-founder of Afrinolly. Also speaking to the students was Hans from Arri, who shared more about his work with the German Nigerian Film Market.

“Essentially the same principles guide their thoughts, and you could see this from their reflections and ideas during a conversation. However, environment and training have played a core part in their overall development and mindset. While our German students were more comfortable with structure and clarity and brought a lot of support in creating proper systems for the project, the Nigerians thrived in building out of nothing, super optimistic. There is no right or wrong; in the end, we all need the balance of both sides.

“An entire movie written and produced in less than three weeks was almost deemed impossible for the Filmakademie students when they first arrived; delivering it in such a coordinated manner and professionally done seemed an arduous task to pull off for the

Nigerians who wanted to ‘wing it’. However, they all pulled their strengths together, complimenting their weaknesses and co-created an experience that was first of its kind.”

“While Nollywood is one of the biggest markets in the world of film, there are only a few connections to the German film industry,” said Guido Lukoschek, Head of International Office, Filmakademie BW.

He added that  “We want to connect upcoming filmmakers from Nigeria with our students, and the wider industry.  With Afrinolly and its two leaders, Jane and Chike Maduegbuna, we are happy to have inspiring and reliable partners operating on eye level. It is fantastic that we managed to bring to life the first edition of The Nollywood Workshop, and we hope for more editions to come.”

For the Project Manager of the workshop at the International Office, Filmakademie BW, Mark Szilagyi, it was a relief to see the workshop finally become a reality.

“I am very happy that the ease up in the pandemic situation finally enabled us to conduct the first Nigerian-German ‘Nollywood Workshop’, which we were planning since 2019. I am glad and surprised in a very positive way about the outcome.”

The trip was also made possible by the Nigerian German Chamber of Commerce, the German Consulate.