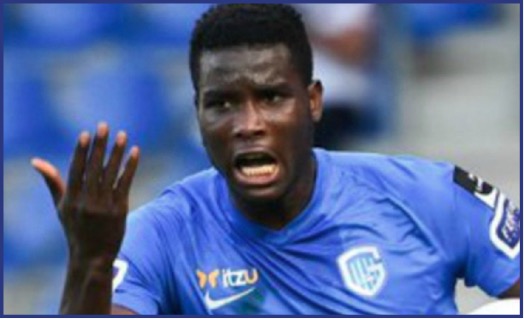 With 33 goals in the league and 35 in all competitions last season, few would have put their money on Paul Onuachu to remain at Genk. Though this season the Nigerian is still searching for his 20th goal owing to spate of injuries, European clubs have started scrambling for his signature with Serie A side Lazio leading the pack. As KRC Genk’s egg heads are ready to do business, the Blue-White faithful may be seeing the last of the former Midtjylland striker in their colours

Super Eagles gangling striker, Paul Onuachu is on the verge of taking his football trade to Italy when the summer transfer opens as Italian Serie A side, Lazio are set to partner the Nigerian with Azzuri’s Ciro Immobile.

According to top Italian radio station, Radiosei, Lazio coach,  Maurizio Sarri is a fan of Onuachu and wants to bring the 27-year-old to the Stadio Olimpico.

Onuachu has been phenomenal in the last two seasons for his club, Genk and he could be on his way out of the Jupiler league by summer.

It was earlier reported that Genk have agreed on a deal in principle with an English Premier League team for the transfer of Nigeria international forward.

The 27-year-old Onuachu scored 35 goals last season to finish as top scorer in the league and also won the award for the most valuable player of the championship. He was also voted the best player of African origin.

A move away from the league was largely expected but it didn’t happen due to Genk’s valuation but they have since dropped their asking price. Onuachu on his part replaced his old agent and it appears a move is on. A source who approached the player with a deal from a Serie A side was told by his management team that he was heading to the English Premier League next summer as an agreement was already in place.

“We had an offer for him to consider. So, he directed us to his new management team. They told us Genk have reached agreement for his sale to a team in the English Premier League”, Several reports in the Belgium media tend to also agree with that stand as it was widely reported that Onuachu who has 19 goals this season will leave the team in the summer with fellow Nigerian Cyriel Dessers as his replacement. Dessers has impressed mightily on loan to Feyenoord but the Dutch side don’t have the €4m required to make the deal permanent and Genk are not willing to compromise on their stand.”

The KRC Genk forward was tipped for a big-money move to a top club in the summer following a highly successful 2020/21 campaign in the Belgian top flight.

A €6 million arrival from Midtjylland in 2019, Onuachu has found the back of the net a whopping 19 times this season despite the spate of injuries that denied him of playing time, making him one of the best performing centre forwards across Europe.

Speaking to Genk’s official YouTube page, Onuachu said : “For me you never know what the future holds but I think scoring a lot of goals this season for KRC Genk and of course my career, it is going to be one of the most important periods for me.

“It is going to be difficult to say I’m going to repeat it where I am going but I think the players we have in this team really make all this possible for me, but like I said earlier, you don’t know what the future holds.

“As it is now, I think I’m really happy for the figure I have in the league and of course for KRC Genk”.

The Nigerian international struggled in his first year in Belgium but won the hearts of many after delivering numerous excellent performances.

Onuachu indeed admitted that the Belgian First Division A is a challenging championship, but the determination to push himself beyond the limit helped him become the best in the country.

The 27-year-old only managed nine goals in 22 matches in his maiden campaign two seasons ago after completing his switch from Danish side FC Midtjylland.

But his turnaround in fortunes 12 months later has been evident for all to see. Onuachu is clear about how he was able to improve his efficiency in front of goal.

“I struggled a bit when I arrived here. At the start of the season, I said to myself that I had to push myself more and give more.

“I am proud of myself and my team, and I am happy to have the support of my companion, who is always behind me.”

Lazio, Sevilla, and Lyon are among the top European clubs already looking to lure Onuachu to one of the continent’s big five leagues.

The big striker however, refuses to hide his affection for English Premier League giants Arsenal.

“Arsenal is the club of my dreams,” Onuachu continued.

“It is the club that I support, that I like to watch, and whose style of play I like.

The forward has a year left on his current contract but he is unsure of seeing out the deal with a number of European clubs believed to be interested in signing him in the summer.

Onuachu has been with Blue and White since the summer of 2019 when he teamed up with the side from Midtjylland.

The attacker delivered scintillating performances in front of goal during his time with the Danish club to earn a move to Genk.

Onuachu’s move to Lazio will however depends on whether the Biancocelesti will be able to meet with Genk’s 25 million euros valuation of the striker.

Security and User Protection: Key to Sustainable Growth in the Crypto Ecosystem