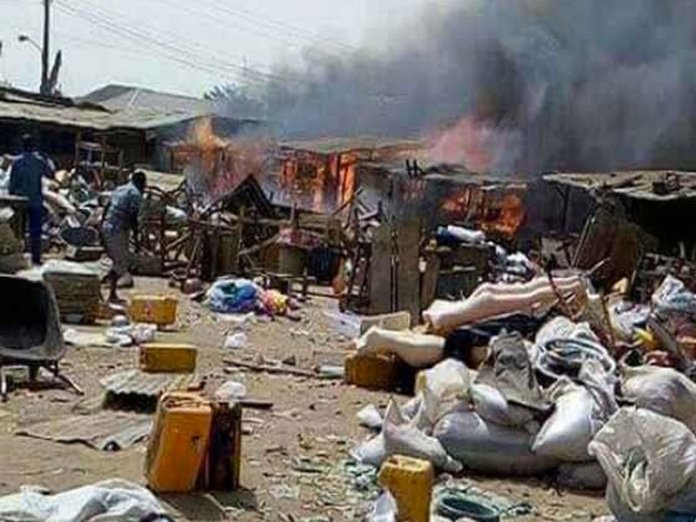 The death toll in the clashes between the Ichen and Ndaka ethnic stock in Kurmi Local Government Area of Taraba State has risen to eight.

The clashes, which started on the 15th of December, 2021 and has become intermittent has led to the destruction of Bissaula, headquarters of the district; Gwanda and several other communities.

Besides, thousands of people have been rendered homeless and are currently scattered across several adjoining villages where they are taking refuge.

Addressing a press conference in Jalingo yesterday, National President, Ichen Cultural and Development Association, Dr. Bibinu Ahmed, told journalists that four persons of Ichen extraction have so far been killed in the crisis while several others sustained varying degrees of injuries.
In the same vein, the spokesperson of the Ndaka people, Mr. Kefas Magaji, told journalists on phone that four persons of Ndaka extraction have so far been killed, three of whom were killed at Gwanda.

It was gathered that crisis erupted in the area when the Ndaka people made attempt to install one of their own as a village head, a development that did not go down well with the Ichen people who claimed to be the original inhabitants of the area.

Less than two weeks after crisis broke out in the area, precisely on the 28th of December 2021, Governor Darius Ishaku held a meeting with the leaders of the area at Baissa, headquarters of the local government during which he suspended the District Head of Bissaula, Mallam Umaru Giwa Danbeki who is of Ichen extraction.

Mallam Danbeki later died on the 16th of January, 2022 few hours after another attack was launched on Bissaula while Dr. Ahmed laid the blame for the escalation of the crisis on the doorsteps of the state government.

According to him, “Governor Darius Ishaku called a meeting on December 28 in Baissa a few days after the first attack on Bissaula and suspended the village head Umaru Danbaki, who died 19 days after on January 16.

“After the suspension of the village head, the elders forwarded the name of Baba Umaru Gambo for appointment as the new Wakili (an Ichen man), but later the local government chairman sent the name of Mallam Rabiu Moses Ibrahim, an Ndola man as the preferred candidate of the governor as Wakili Bissaula.

“Several Tigun and Ndola village heads have passed on in the past and nobody from other tribes was appointed Wakili in such places.

“The unprovoked attack on our people in Bissaula was based on fake stories that the Ndaka people conquered the area 200 years ago. This is unacceptable.”

Ahmed, however, wondered why the state government is yet to set up a panel of inquiry to investigate the remote and immediate causes of the crisis or bring those fingered as sponsors of the clashes to book.

Lamenting the clashes in the area, Kefas Magaji, who is the youth leader of the Ndaka people in Bissaula described the crisis as unfortunate and called on the government to investigate the remote cause of the crisis to restore peace in the area.

Magaji noted that the allegation that Ndaka people who also claim to be Chambas were visitors in the area was not true noting that Bissuala was a Chamba word meaning ‘a pond of the flocks’.

Magaji described the Ndaka/Chamba as peace-loving people who don’t want crisis saying that is why his people have written several letters of complaint since the year 2000 against what he described as the suppression of the Ndakas by the Ichens.