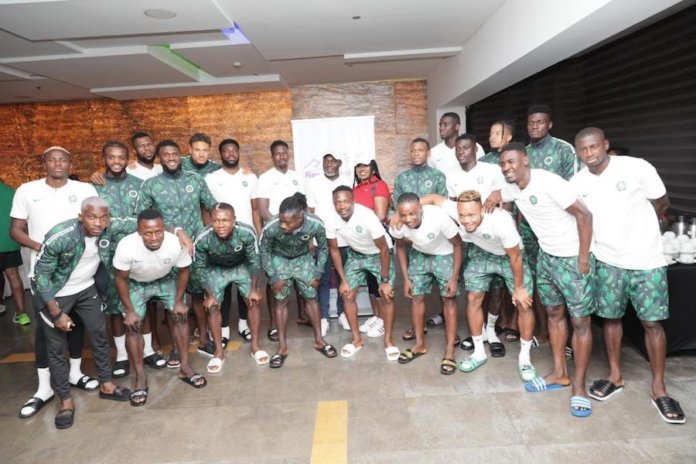 RevolutionPlus Property, the official real estate partner of the NFF will be giving out free land in choice locations within its estates to the Super Eagles if the team wins the ongoing AFCON trophy.

According to the company’s Group Managing Director/ CEO, Bamidele Onalaja,

the land will be available in choice locations in Lagos, Abuja FCT, Nasarawa, Abeokuta, Shimawa and Mowe in Ogun State, Ibadan and Port Harcourt.

Onalaja who spoke in Lagos on the eve of Nigeria’s final group match against Guinea Bissau in the ongoing AFCON, said the gesture is aimed at giving the team a boost in its quest to win the continental cup for Nigeria a fourth time and make Nigerians proud again.

Onalaja also reaffirmed his earlier pledge of N4m to the team during the World Cup qualifiers and urged them to bring AFCON glory to Nigeria once again.

Super Eagles Coach, Augustine Eguavoen is not carried away by the general high ratings pundits are giving to his team. He made that known before the dead-rubber tie against Guinea Bissau yesterday. But should the Eguavoen-led team wins the tournament (which is possible), he will not only join the rank of Egyptian El-Gohary and Late Stephen Keshi as player and manager to do so but he would be the only fellow to have won all shades of medals at the tournament both as a player and manager- Third-placed as a coach in 2006; runners-up as a player in 1988; and on-field captain as cup winner in 1994.

Comoros, rated 132nd in the world, are the third lowest-ranked side of the 24 teams in Cameroon for the tournament as the former French colony only joined world governing body FIFA in 2005.

Nonetheless, their triumph now has made their coach to start dreaming of another major upset – reaching a first World Cup finals – which could become easier when the tournament expands to 48 teams from 2026 onwards.

A total of 11 players may be unavailable for Tunisia in their last group match today. Sitting third on the log in Group F, Tunisia are Super Eagles’ potential opponents in Sunday’s Round of 16 match at the Roumdé Adjia Stadium, Garoua.

But for that fixture to be valid, Tunisia will have to scrape at least a point in today’s last group match with unlikely group leaders, The Gambia.

Going by form book, the game could easily be ‘awarded’ to Tunisia. But in a tournament that has seen form books being turn into shreds, nothing is impossible.

The Warriors of Zimbabwe secured a massive 2-1 win over highly favoured Syli Stars of Guinea in the last Group match on Tuesday. Although the team finished last on the log, it however set a record in Cameroon. Just like it happened at the 2006 edition in Egypt when they finished last in the group having Nigeria, Senegal and Ghana.

Zimbabwe claimed their first Nations Cup win since 2006 by the same 2-1 margin.

*In Group F, Its Fight to Finish!

While the two initial big teams, Ivory Coast and Algeria take one another in last Group F match, the other simultaneous tie involving the minnows Sierra Leone and Equatorial Guinea seems to have attracted more attention as both sides aim to qualify. Sierra Leone have only one victory from their seven matches at the AFCON though they’d scored as many goals in their last match (two vs Ivory Coast), as they had done in their previous six combined in the competition (2).

While Equatorial Guinea have only lost two of their eight group stage games at the tournament (W4 D2), keeping a clean sheet in three of their last four such matches, including last time out versus Algeria.

Giving Voice to the Disabled Through Film and TV