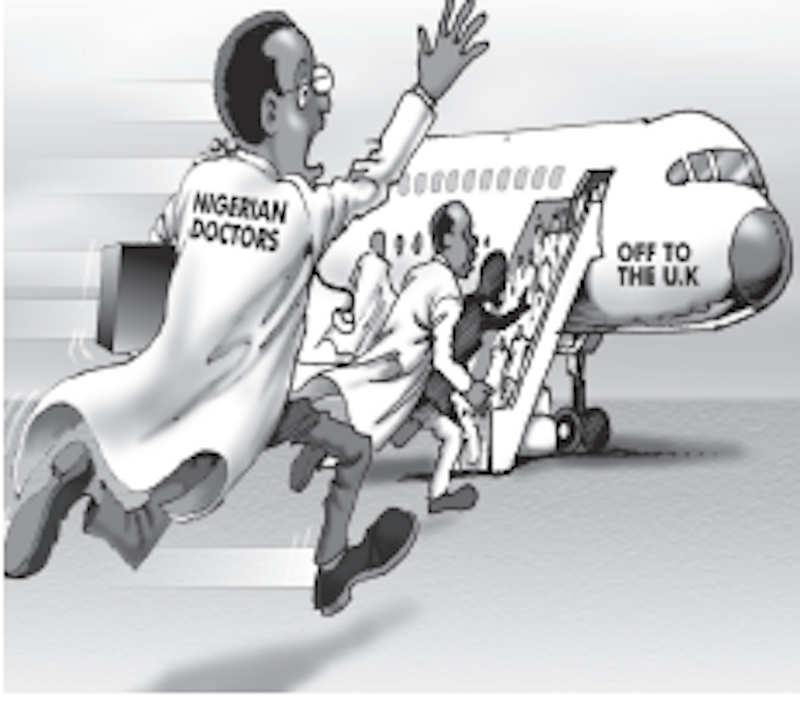 In a graphic display of how our country is losing its best and brightest, the General Medical Council of Britain (GMB) has revealed that 805 Nigeria-trained doctors were licensed between July and December 2021. These additions, according to the regulating body responsible for licensing doctors for practice, increased the number of Nigerian-trained specialists and consultants in the United Kingdom to 9,189. This is most worrying for a country in dire need of skilled professionals to effectively manage the sensitive health sector.

While the issue of brain drain among medical professionals is not new, the recent surge has become increasingly troubling as the trend of doctors migrating to other countries is at an all-time high. Nigeria’s polling agency, NOIPolls survey in 2017 showed that 88 per cent of the medical personnel in our country were considering work opportunities abroad. Only last September, Saudi Arabia, constantly on the lookout for our best, organised a recruitment interview for medical consultants and specialists in Abuja. The specialties required included anesthesia, Intensive Care Unit (ICU), pediatrics surgery, family medicine (consultants), obstetrics and gynecology, Ear, Nose and Throat (ENT), Emergency medicine, orthopedic surgery, and more. Agencies of the United States, Canada, South Africa, United Arab Emirates, and many other countries routinely conduct recruitment exercises in a country of one doctor to more than 5000 patients, a far cry from the World Health Organisation (WHO) recommended ratio of one to 600.

Just recently, President of the Nigerian Medical Association (NMA), Innocent Ujah said over 50 per cent of our doctors are outside the country. “We estimate that about 80,000 Nigerians have been trained as doctors but only about 40,000 are at home, said Ujah, Professor of Obstetrics and Gynaecology. “And these surely are not enough and adequate. Even where they are going to, their services are better than our own, they also have more doctors than we have.” This was perhaps why many were outraged recently when the Minister of Labour and Employment, Chris Ngige made light of the serious issue. Despite being a medical doctor, Ngige asserted falsely that Nigeria had more than enough doctors to take care of its health needs.

However, the reasons for the mass exodus of doctors, trained largely at public expense, are obvious. Like academics and indeed other professionals, they are treated with disdain. They work long hours in poor health conditions. This is exacerbated by inadequate and ageing infrastructure, and poor remunerations. So many doctors and other medical personnel were lost during the early days of the Covid-19 pandemic because of inadequate equipment. Besides, in some states of the federation, doctors are owed salaries for months, thus prompting frequent industrial actions. Agreements with government are hardly honoured. Their hazard allowance was grudgingly reviewed upwards from mere N5000 to N32,000 last month after years of agitations. Even worse, in the face of the prevailing insecurity across the country, many doctors have become easy victims of kidnap for ransom.

This apparent neglect of the health sector is encouraging medical tourism among the middle-class and the wealthy. There are no adequate statistics but there is no doubt that Nigerians are spending a fortune outside the country on health. The British Broadcasting Corporation (NBC) said recently that Nigeria spends about $1billion annually on medical tourism, particularly to India. This is a lot of money that would have made a difference if ploughed to the health sector at home.

To reverse the country’s worsening health sector, and retain the very best professionals at home, the authorities must improve the present work environment. Nigeria has what it takes to equip the hospitals with the best equipment available while remunerations should be adequate for improved quality of life. The pasture should be made greener at home.