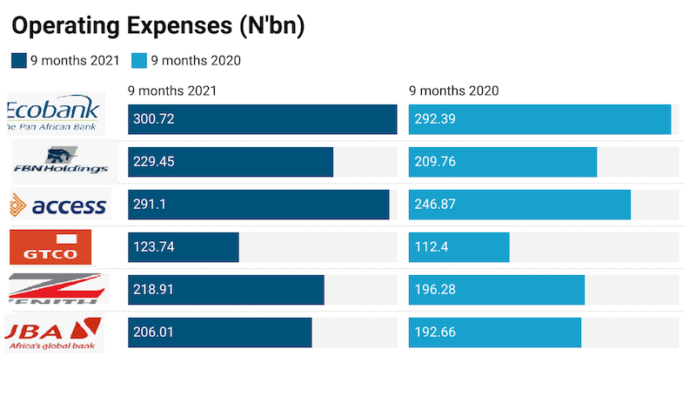 Kayode Tokede
On the heels of challenging operating environment, Ecobank Transnational, Incorporated (ETI), United Bank for Africa Plc (UBA), Access Bank Plc and three other Tier-1 banks generated N786.75billion in profit before tax in nine months of 2021, an increase of 21.14 per cent from N649.44billion reported in nine months of 2020.

The other Tier-1 banks are FBN Holdings Plc, Guaranty Trust Holding Company Plc and Zenith Bank Plc.
Of the banks, ETI had the highest increase in profit before tax by percentage, while Zenith Bank maintained the number one spot in terms of profit before tax value generated in the period under review.

FBN Holdings and ETI were the only financial institutions that released audited result and accounts for the nine months period on the Nigerian Exchange Limited (NGX).

From all indications, FBN Holdings and GTCO were the only two banks that recorded decline in profit before tax out of the six Tier-1 banks, while ETI grew its profit before tax significantly by 316.5 per cent.

The Group Managing Director/CEO, UBA, Kennedy Uzoka had said: “Once again, the bank has shown resilience in delivering on its commitment to shareholders, stakeholders, and the investing public, evident in the strong positive financial metrics recorded in the reporting period.
“Our profit before tax was up by a record 37per cent to N123.4 billion, with an annualised RoAE of 19.2per cent, showing our renewed commitment to creating more value for our shareholders.

In addition, Zenith bank closed the period under review with N179.8billion profit before tax, a 1.43 per cent increase from N177.28billion reported in prior nine months unaudited result and accounts.

The nine months result and accounts for 2021 is contrary to Moody’s reports of last year that stated that Nigeria’s banking sector and for banks in Africa will remain negative this year amid difficult operating conditions and sovereign pressures straining banks’ credit profiles.
In a chat with THISDAY, the Chief Operating Officer, InvestData Consulting Limited, Ambrose Omorodion noted the banking sector nine months results were of mixed performances, calling on investors to take position in the banking sector stocks listed on the NGX.

According to him: “The banking sector is the most consistent sector on the NGX. The current nine months of 2021 result is not bad considering operating environments and it is expected that dividend payout to shareholders going to be high in 2021 full financial year.

“For the likes of Access bank acquiring more banks in Africa, the lender’s in years ahead might outshine others in terms profit. Access bank has created an impressive impact in most of the African countries it has acquired banks, which is good for the management.
“A check into the nine months results of 2021 showed Access bank has surpassed others and it is expected that the expansion going to impact on the bank’s financials going forward.

“As we speak now, Zenith Bank is the leading bank in terms of Earning Per Share and also in profitability. GTCO also has shown strength in profits despite reporting decline that led to investors selling its stocks.

“The audited results from ETI also an impressive performance but the lender has not paid dividend to investors for the past six years. We have seen improvement in the pan-African financial parameters lately and we expect dividend payout.
“The FBN Holdings results showed mixed performance coupled with decline in profit. However, the Holdings financial institution dividend payout is very low and it might not attract investors.

“However, with the change in management and shareholding structure, we might see an impressive performance by 2021 full financial year.”
However, THISDAY gathered that there were mixed performances in these banks’ loan impairments charges as they were faced with growing profits amid increasing operating expenses.