Olugbenga Ogunmoyela: An Omolúwàbí  in the Midst of Cultural Anomie 39 mins ago

Offa Poly Gets Assurance on Upgrade to University 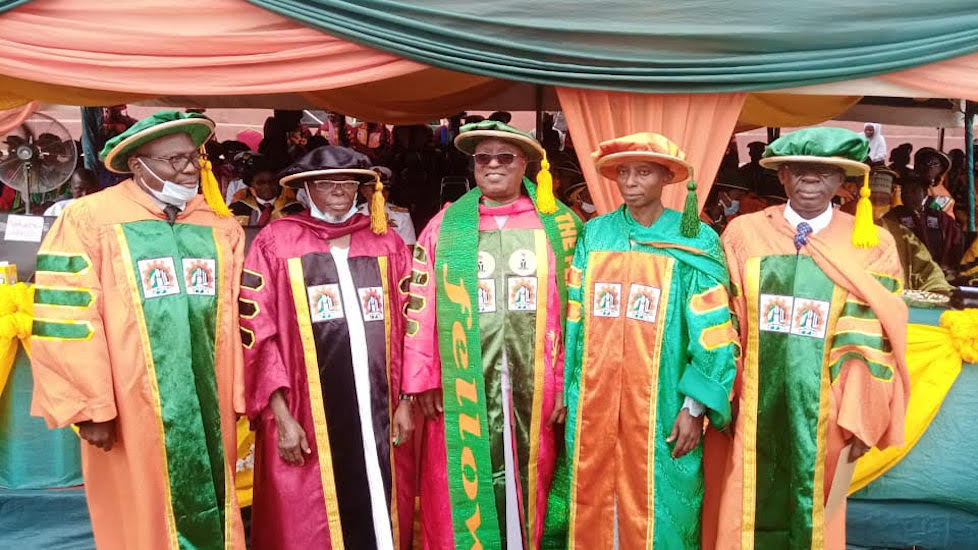 The aspiration and efforts of the Federal Polytechnic, Offa, to be upgraded to a university of technology may soon be attained, given the assurance by the senator representing Kwara South Senatorial District, Oyelola Ashiru, at the 11th convocation ceremony of the institution recently. Uchechukwu Nnaike reports

The recently concluded 11th convocation ceremony of the Federal Polytechnic, Offa, may be its last as a national and higher national-awarding institution, as efforts to upgrade it to a university gather momentum.

The institution had a combined convocation for 12,161 two sets of graduates for the 2018/2019 and 2019/2020 academic sessions. It also conferred a fellowship on Ashiru and Prof. Ahmed Sadauki.

Ashiru, while thanking the management for the honour, assured members of the polytechnic community that the upgrade would soon be actualised.

“This 11th convocation, held on the 11th day of the 11th month, is a significant one. After 11, the next number is 12, the midnight. And after midnight, there will be a new dawn, and the new dawn will be Federal University of Technology, Offa.”

The bill to upgrade the polytechnic, which Ashiru sponsored, has passed through second reading at the Senate and referred to the Senate Committee on Tertiary Institution and TETFund.

Highlighting the institution’s preparedness for the upgrade, the Rector, Dr. Lateef Olatunji, whose five-year tenure will soon elapse, said since his assumption of office as the fourth substantive rector, efforts have been geared towards guarding the recorded successes jealously and ensuring its steady progress as far as core academic culture is concerned.

“We have not only placed the institution on steady academic growth, but we have also expanded the facilities available for teaching and learning on our two campuses, and we have made the administrative environment more convenient. I am confident that successes recorded during our term would be sustained and improved upon by successive administrations,” he said.

Ashiru added the governing council, management, staff, and students have keyed into his vision of evolving an education system with the necessary capacity to achieve the set objectives for national development.

The rector stated that the present crop of graduating students, apart from their respective areas of professional studies, were further equipped with the necessary training in entrepreneurship to confront the challenges of dwindling employment opportunities.

The polytechnic boasts of well-equipped laboratories, studios and workshops for technology-oriented departments to function optimally and continuously upgrade to meet modern standards.

Under Olatunji, the polytechnic has taken steps to develop further its infrastructures (construction and reconstruction of roads, provision of modern working facilities, procurement of equipment into laboratories, workshops and studios). It has continued to sustain its online admission culture, collaboration links with organisations within and outside the country, and a conducive environment to boost working and aid learning.

In research and development, the institution has become well-known for some of its technological innovations and scientific breakthroughs. Such include the sweet potato for bread and other confectioneries from the School of Applied Science, password-enabled security doors, automatic dust bin, microcontroller-based appliance control system, a model house built with expanded polystyrene wall substitute for concrete blockwork.

Others are animal waste to biogas for domestic heating, solar electric system, solar cooker, among others, from the School of Engineering.

He said all ND and HND programmes have the required approvals, and the management has also successfully mounted additional programmes including Catering and Hotel Management, Agricultural Technology, Public Administration, Environmental, Purchasing, and Procurement. The institution has continued to increase staff strength and also facilitated several capacity-building programmes for staff. Currently, he said more than 50 staff are PhD holders.

The rector announced that the Institute of Chartered Accountants of Nigeria (ICAN) recently listed the polytechnic as one of its certified institutions in Nigeria to obtain qualitative accountancy training.

Other achievements he said are regular staff promotion, prompt payment of salaries and allowances.

Olatunji announced the successful commencement of affiliation programmes with the Federal University of Technology, Minna, following the National Universities Commission (NUC) approval. He said the programmes commenced fully in the 2018/2019 academic session with four programmes (B. Tech. in Computer Science, Mechanical Engineering, Electrical Engineering and Food Science and Technology).

He said the polytechnic is currently in collaboration with industries/agencies like Nigeria Building and Road Research Institute (NIBRRI), Federal Institute of Industrial Research, Oshodi (FIIRO).

Olatunji said his administration also facilitated the surveyor’s instrument (digital level) worth N5.3 million to the Department of Surveying and Geo-informatics. The instrument was donated by the Surveyors Registration Council of Nigeria (SURCON) during the induction of newly registered surveyors in Nigeria. There was also the NCC training and donation of 110 laptops to the polytechnic.

In his remarks, Buhari, represented by the Director, Polytechnic Education and Allied Institutions, Federal Ministry of Education, Mr. Adeleye Adeoye, noted that nations are in stiff competition to outwit one another in the area of offering quality knowledge and positive researches, and Nigeria should be able to provide leadership in Africa in that regard.

He called for the promotion of a modern approach to knowledge acquisition and urged agencies in charge of education development to find a way of encouraging youths to learn in the country’s institutions, as well as to attract international students and researchers so that the ranking of Nigerian polytechnics can soar.

The president stressed that quality technological and technical education is indispensable in the country’s drive for a technologically advanced nation.

He said some resources are invested in the polytechnics, and Nigerians have the right to expect results from their investments. He, therefore, urged polytechnics to assure Nigerians at such occasions by showcasing new discoveries or inventions that can add value to the standard of living.

The president advised the graduands to use the skills acquired at the polytechnic to venture into the entrepreneurial field instead of waiting for white-collar jobs. He said the government gives soft loans to budding entrepreneurs through the Bank of Industry and other social interventions.

“The wealth of this nation is in the hands of teeming youths, who are willing to nurture businesses, explore opportunities and create ventures that are noble and novel,” he said.

The Chairman of the Governing Council, Dr. Usman Ahmed, thanked the president for the confidence reposed in the council members and always promised to make policies in accordance with the government’s ‘Education for Change’ agenda.

He ascribed the continued peaceful existence in the institution to the maximum cooperation of staff and students, which has led to an uninterrupted academic calendar.

According to him, among the concerns of the council and management of the polytechnic is the welfare and progress of the staff, to which the outstanding 2,020 staff promotion was promptly attended to at the inaugural meeting of the council.

He also commended the federal government through the Tertiary Education Trust Fund (TETFund) for sponsoring staff for capacity development regularly.

He announced that the PhD thesis of a staff of the institution, Dr. Sunday Asakpa, who worked on ‘Visual Cryptographic System for Ear Biometric Template Security’, and Dr. Ademola Ebeloku, who worked on ‘Impact of Occupational Health and Safety on Performance of Cement Companies in Nigeria’, were ranked as the best in the country and their works were converted to textbooks by TETfund for use in tertiary institutions across the country.

The high point of the ceremony was the presentation of prizes to outstanding graduands, including the overall best graduating student, Miss Adesewa Abiola, HND graduate from the Department of Office Technology and Management with a Cumulative Grade Point Average (CGPA) of 3.98.

She said the journey was tough with financial challenges, but she never gave up. She thanked the management and all her lecturers for grooming her to be the best.

Delivering the convocation lecture, ‘Nigeria Security Challenge: Implications for Sustainable Educational and Economic Development’, Sadauki highlighted the causes of insecurity in the country to include the imposition of unpopular policies, corruption, unemployment, poverty, terrorism/suicide bombing, defective intelligence gathering and underfunding of security agencies, external influence, inequality and uneven development, among others.

He said insecurity has led to a significant drop in enrolment rate from the considerable gains made in years before. He regretted that out-of-school children tend to resort to vices and can be easily recruited as child soldiers, thereby worsening the security situation in the country.

According to him, insecurity has also led to the disruption of economic activities, decreased foreign direct investment, increased brain drain, among others.

He called on the government to include peace studies and security management in the school curriculum at all levels to enable youths to appreciate the importance of peace and security in a secular state like Nigeria.

Sadauki also stressed the need for a collective security arrangement by federal, state, and local governments. He said the arrangement should produce a committee at the village, community, local, state, and federal levels to provide sensitive security information for security agencies in their areas of operation. “This will ultimately assist in identifying criminals, their sponsors, and hideouts in Nigeria,” he said.