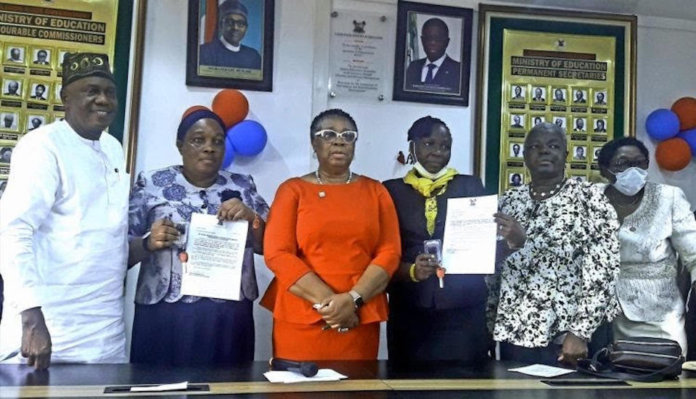 Unfortunately, he had passed on in July this year, but his family were at the secretariat to receive his house keys.

Speaking at the presentation of the keys, held at the Conference room, Ministry of Education, Alausa, the Commissioner, Ministry of Housing, Mr. Maruf Fatai- Akinderu commiserated with the family of the deceased and congratulated them for their efforts in impacting their schools positively.

He noted that ever since the governor made the promise, his ministry has continued to follow up and constantly assuring recipients that a day like this will become a reality. He applauded the recipients for their patience saying that the governor kept to his promise and has remained consistent in touching every sector and improving lives.

The Commissioner of Education, Mrs. Folashade Adefisayo described the gesture as a promise made by the governor.

” We thank God that we have sweet memories of the departed who had worked tirelessly, ” she said.

In a related development, the Lagos State Ministry of Education, also honoured the teachers who won the 2021 President’s Teacher and School Excellence Award (PTSEA) held last week to commemorate the World Teacher’s Day.

The best teacher in public junior secondary school in Nigeria, went to Mrs. Temitope Obiwunmi from Wahab Folawiyo Junior Secondary School, Ikoyi. She got a certificate, laptop and fridge.

Mr. Rasheed Odenike from Lagos State Civil Service Senior Model College, Igbogbo, Ikorodu, who emerged the best teacher in public senior secondary school in the country was presented with a certificate and a fridge. The duo had won the best teacher award during the Lagos State year 2020 teacher’s award.

Bolade Junior Grammar School, Oshodi won the best school in Nigeria. The Principal, Mrs. Adenike Ojo received a certificate and a bus on behalf of her school.

In her remarks, the Commissioner of Education, Mrs. Folashade Adefisayo commended them for their efforts, saying that they have made the state proud and the narrative of an area like Oshodi which is known for vices, would begin to change.

“As teachers, you are great because you touch the future,” she said, adding that they should keep learning and growing.

She disclosed that the state will soon commission a new school at Elemoro, Ibeju Lekki and in Agege, adding that the state is also developing a concept in the riverine areas by distributing laptops into schools.

” The governor has already promised to ensure internet access in our schools and the child is not deprived because they are in public schools,” Adefisayo said.