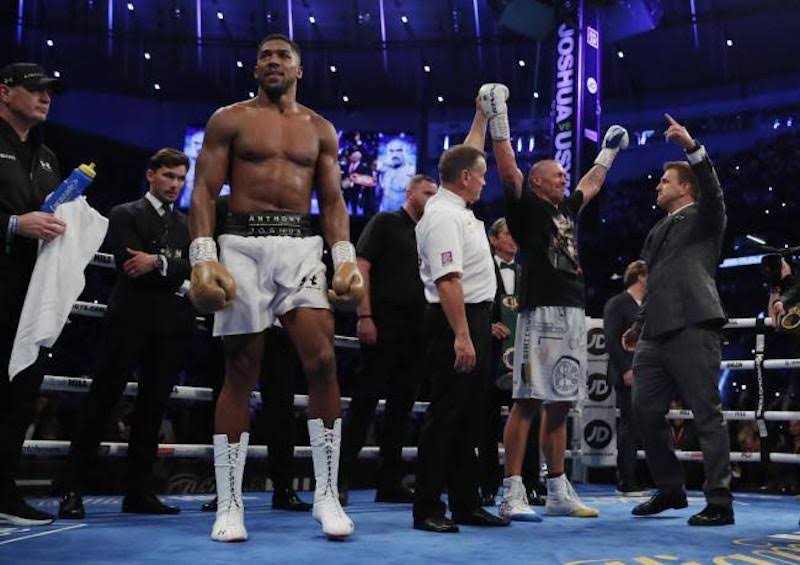 *AJ: I will bounce back because I am different kind of animal

Newly crowned IBF/WBA/WBO heavyweight champion Oleksandr Usyk has said that he’s ready and willing to give dethroned champ Anthony Joshua a rematch any where in the world.

In a battle of 2012 Olympic gold medalists, Joshua looked mentally disengaged most of the time during the fight against the former undisputed cruiserweight champion Usyk at the Tottenham Hotspurs Stadium in London, UK

Meanwhile, Joshua has said that he is “a different animal, not a sulker” and “will bounce back” from losing his world heavyweight titles to Oleksandr Usyk.

Joshua said he “couldn’t see in round nine” after an eye injury sustained in Saturday’s 12-round fight.

His promoter Eddie Hearn suggested his fighter may have suffered a broken eye socket.

Asked after the fight about what went wrong, the defeated Briton said: “I couldn’t see in the ninth round, couldn’t see anything really because my eye was shut.

“It was a good experience because in adversity you’ve just got to learn to control yourself, stay on top of things, so when I couldn’t see anything – it’s the first time that it’s happened in a fight.”

Hearn had said Joshua had given Usyk, 34, too much respect and would have to make “fundamental changes” to regain the WBA, WBO and IBF titles he lost in the fight.

The Briton has a rematch clause in his contract with Usyk, and later confirmed he would take it.

Joshua added: “When I was walking back through the tunnel, I just said to myself, ‘I’m ready to get back to the gym, I’m ready to just put that work in’.

“I just want to get back to the gym, get back on the grind and improve, so when I fight these good guys and see that they are hurt I can capitalise on the opportunity.

“I’m a different kind of animal. I’m not a sulker. This is a blessed opportunity, to be able to fight for the heavyweight title of the world, fight good fighters time and time again and for people to come out.

“I’m not going to be going home and be crying about it, because this is war. It’s a long process. This isn’t just one fight and then I’m done.

“I’m going back to look at way that I can improve. Straight away, I’ve already been watching the fight and thinking ‘I could’ve done that better’.”

“If it did happen, what would Tyson have done to him? It wouldn’t have gone 12 rounds. Tyson would have destroyed him. Absolutely. The unification fight was there, such a big fight. Heartbreaking.

“What would Tyson Fury had done to Joshua? A better chin, bigger puncher.”

“But that was my thing about this fight – Joshua is so vulnerable. He’s been like that for ages.

“I thought Joshua would be too big for Usyk, but I knew if he was there at the end, then he’s been outboxed. Usyk nearly had him over at the end.”

“He was gun shy. Never let his hands go. They can talk all they want about rematches. He’s just been totally exposed, like he was against Ruiz. How can he be getting outjabbed by Usyk, who was taking the fight to him? I was shocked at that.

“Even if he was to beat Usyk, what is Tyson Fury going to do to Joshua? You’d have your house on Tyson beating him.”

Asked about any future fight with WBC champion Fury, Joshua said: “The road to undisputed is marketing. When I pulled up today, it just reminds me that it’s a big circus. This is the greatest show on Earth.

“The main thing is that you have got two competitive fighters in the ring from UK soil that just want to go toe-to-toe.”

Matchroom boss Eddie Hearn admitted he was “gutted” about the defeat.

“I can’t see AJ taking a 10-round fight, he boxes twice a year and maybe that is something we will have to look at.

“He is going to go away and all he will do is think about Oleksandr Usyk. He will be thinking: ‘How can I beat him, how can I improve?’ He is obsessed with improving.

“I just feel there is so much more Anthony Joshua in that fight but he will have to do a lot more in the rematch to be victorious.”