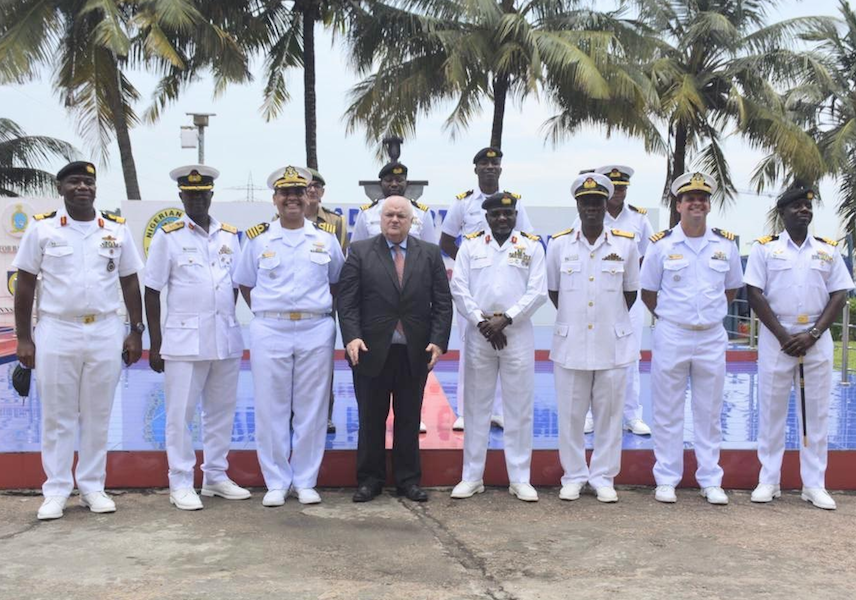 Brazilian Navy Ship INDEPENDENCIA Fragata recently arrived Nigeria for a maritime interdiction mission codenamed ‘GUNEX’ in the Gulf of Guinea. Rebecca Ejifoma reports that the visit was also aimed at strengthening bilateral relations between both nations as well as enhancing maritime security

Commending the Nigerian Navy for being at the forefront against piracy in the GoG, Ambassador of Brazil to Nigeria, H.E Ricardo Guerra de Araújo, during the courtesy visit with his entourage to the Flag Officer Commanding (FOC), Western Naval Command, encouraged more collaborations between both navies to keep the Atlantic safe.

“This is what we should do more often; it will bring our countries together. So, our relationship shows the reality of these two countries and that we have so much in common,” he said.

Araújo, who was represented by the Consulate General of Brazil to Nigeria, Francisco Soares Luz, said the Brazilian Ship is one of the prides of the country’s Navy and was built in the country 42 years ago.

“I think it’s very important for the Brazilian Navy to be here. Participating in the inauguration GUNEX One is a joint operation among Equatorial Guinea, Cameroon, Nigeria, Cape Verde, and Brazil to fight piracy in the Gulf of Guinea and other international crimes. It’s the first operation of this kind. I hope it won’t be the last,” he hinted.

While acknowledging Brazil and Nigeria as the biggest countries, most populous, and biggest economies in their regions – Brazil in Latin America, and Nigeria in Africa – Araújo emphasised the importance of curbing piracy.

On his thoughts about fighting piracy in the Gulf of Guinea, he said it is paramount because piracy raises the cost of living for everyone, especially the landlocked countries, who pay with inflation.

According to the Ambassador, Brazil and Nigeria share the Atlantic as a border, therefore, “having your border safe is important for everyone. No cost is too expensive to keep the Atlantic safe”.

Speaking also, the FOC Western Naval Command, Rear Admiral Jason Gbassa, told newsmen that the Nigerian Navy has always desired to have navies of other countries visit them. “Then we participate in exercises that will ensure maritime security within our waters and by extension within the Gulf of Guinea.”

The FOC, represented by the Chief Staff Officer, Rear Admiral Halilu Zakaria, emphasised that the visit captures the Nigerian Navy total spectrum strategy, which allows them to collaborate with other navies in the Gulf of Guinea.

“The Gulf of Guinea is an area of interest for the Nigerian Navy because it will allow all maritime legalities to continue to thrive within these waters like the ambassador said, it has a rippling effect within the landlock countries and in Nigeria,” he admitted.

For Gbassa, the Nigerian Navy itself has done so much to ensure that the maritime environment is deprived of any form of illegality.

While conceding that the visit was aimed at strengthening bilateral relations between Nigeria and Brazil as well as enhancing maritime security in the Gulf of Guinea, both navies engaged in a novelty football match at the National Stadium, Surulere.