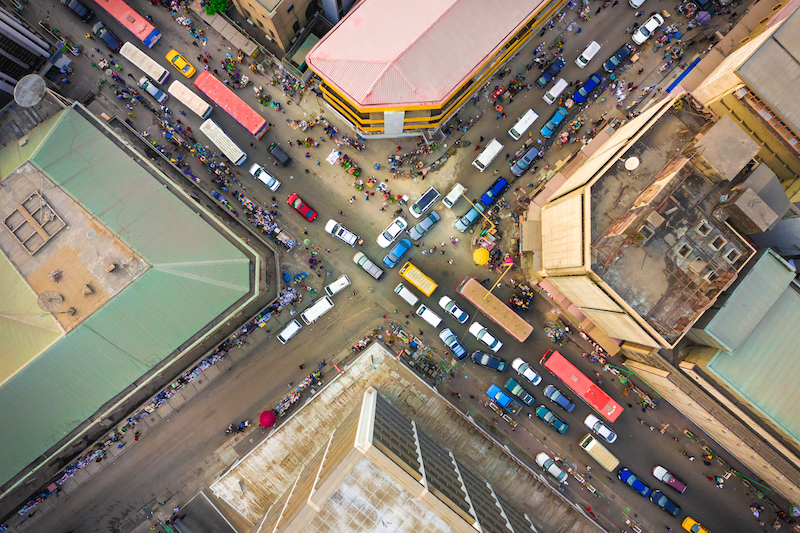 Through 25 spectacular photographs, Kalu and Famuyiwa explore the culture, history and aesthetics of the mega-city. Lagos is reintroduced by the two artists through new heights, angles, aerial and terrestrial perspectives to reveal the unique beauty and complexity of the bubbly city. Through their works, the photographers have shown their deep interest in preserving the culture, history and energy of Lagos as well as the spaces and people within it. Their photographs play the “symbiotic game of planned and spontaneous.”

Titled Vantage Point, the show is a testament to Kalu’s and Famuyiwa’s connection with the city, investing many years in finding the unique norm of Lagos, while beaming light on its dynamic environment.

Kalu is a documentary photographer with a knack for street photography. Born and raised in Lagos, he had traversed the heart of the Lagos metropolis in areas like Dopemu and Iyana Ipaja to meet artisans, street traders and urchins, beginning with friendly conversations. While there is a shift towards reinventing Lagos, Kalu’s stills document the city’s temperament and historical signposts such as the mass commuter bus known as ‘Molue’ as seen in some of the images in his series with titles such as “Outlier”, “Stance” and “Swagger”.

Having graduated from Enugu State University with a Bachelors in computer engineering, he began street documentary and wedding photography in 2014 with Auxano Photography now Verteller Studios. He is an official Fujifilm Global X-photographer, a certified Canon Miraisha master storyteller, VII Academy Foundry Alumni and first runner-up in the 2017 NATGEO Portfolio Review.

On his part, Famuyiwa appropriates his aerial photography in deepening appreciation for nature, architecture and the human experience. With a background in technical drawing, he obtained a toy drone in 2015 and a professional one in 2019 to capture aerial shots of Lagos. In his work, titled “X-Factor”, he focuses on merging lanes and intersections as visual metaphor for the marketplace of ideas in human relationships. He has a no-holds barred attitude to photography which is quite evident in his shot, titled “Launch Out”, taken at the famous Ember Creek. Though he wouldn’t describe himself as a loner, he is attracted to items that exist alone or are abandoned. That is his subtle way of making a statement on restitution.

Armed with a degree in electrical and electronic engineering from the University of Ibadan, photography was a deviation from his childhood dream of being a pilot. Still, he came close to this dream with his expertise in drone photography.

“Both artists are strikingly different but complementary,” said remarked Nneoma Ilogu, the show’s curator. “Their diverse narratives remind us of the importance of perception. Each image encourages us to look past the surface to what lies beneath. An opportunity to cast the gave upward and hope or dream of something better. These two trailblazers are a critical addition to the broadening canon of photography of Lagos. My hope is that ‘Vantage Point’ makes us appreciate and see both the macro- and microscopic realities of Lagos as enjoyed from a terrestrial and bird’s eye perspective.’’