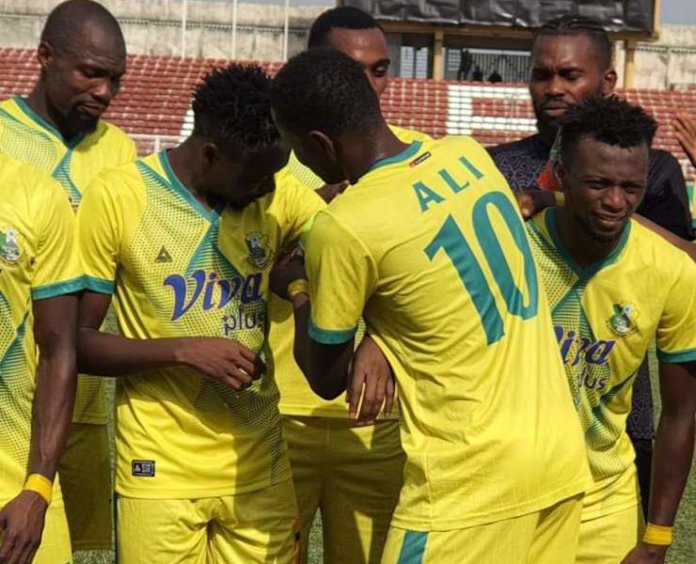 Akwa United retained the top spot in the Nigeria Professional Football League (NPFL) Match-day 21 fixture after a 2-0 win over local rivals Dakkada, but Kano Pillars stayed in touch with the Promise Keepers courtesy of a 1-0 win against Adamawa United with Super Eagles skipper, Ahmed Musa, outstanding on his debut.

Musa who recently returned to the Nigerian topflight to stay in form after quitting the Saudi Arabian premier league, was outstanding in the Sai Masu Gida clash with Adamawa at Ahmadu Bello Stadium in Kaduna.

The former Leicester City winger set up Rabiu Ali for the winning goal 10 minutes from time.

Kano Pillars maintain second position on the table with 40 points from 21 matches.

In Ilorin, Kwara United returned to winning ways courtesy of a 2-0 home win against Plateau United.

Jide Fatokun put the home team ahead four minutes after the break, while Stephen Jude added the second 10 minutes from time.

At the Ozoro Stadium in Delta State, Mountain of Fire and Miracles FC completed the double over Warri Wolves, courtesy of a goal each from Onyebuchi Ifeanyi and Clement Ogwu.

The Olukoya Boys claimed their sixth away point of the season in the 21 week old NPFL, as they overpowered their hosts with an outstanding performance to complete the double following a 2-1 victory earlier in the first fixture in Lagos.

The hosts began the exciting match with good attacking display and created few chances in the early minutes of the match, but they could not break the Lagos-based team solid defense.

After 24 minutes of action Onyebuchi Ifeanyi put MFM FC in front with a powerful header when he connected a well taken corner kick from Adeyinka Najeem.

Clement Ogwu doubled the lead for the Olukoya Boys in the 40th minute of match with an audacious strike.

Rivers United kept the pressure on the top three teams on the table edging out Rangers 1-0 at the Nnamdi Azikwe Stadium, Enugu.

Manu Garba gave Wikki the lead on 22 minutes but the visitors rallied back with goals from Anas Yusuf and Silas Nwankwo.

Heartland continued their impressive form handing down a 2-0 defeat to Katsina United at the Okigwe Township Stadium.