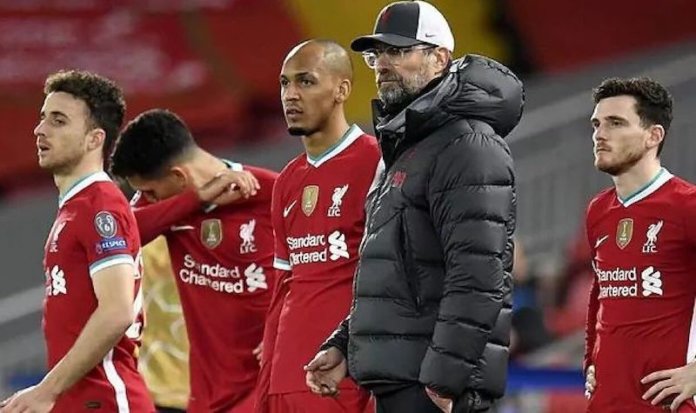 The two most successful teams in the history of English football-Manchester United and Liverpool will go head-to-head tomorrow at Old Trafford in the Premier League, with United looking to return to winning ways when they welcome Liverpool

The Red Devils put one foot in the final of the Europa League on Thursday as they recorded a 6-2 victory over Roma in the first leg of their semi-final.

Ole Gunnar Solskjaer’s side are also comfortably inside the top four in the Premier League, sitting 12 points clear of fifth-placed West Ham United, making this weekend’s contest a bigger game for Liverpool, who currently occupy sixth position in the log.
Former England striker, Michael Owen, who had the rare priviledge to star for both sides is envisaging a close encounter on Sunday.

“Both these sides played out a 0-0 draw at Anfield earlier in the season. That was followed by another close encounter in the FA Cup, a game United won 3-2, so I believe we could be in for another tight match here.

“Away from home United have been sensational this season. Their home form had been a bit patchy up until recently, however, they come into this undefeated at Old Trafford in six league matches.
“I think United will happily give Liverpool some territory here in the hope they can catch them on the counter. To some degree, I think this can work, although it will be hard to keep Liverpool out playing like this over the full 90 minutes.
“With that in mind, I could see this one ending all square with both sides cancelling each other out. 1-1.”

The Reds only dropped points in six league games last season. Therefore, there is no denying that Liverpool have dropped off this season, which will make claiming a victory at Old Trafford that little bit harder.

Liverpool have not won at Old Trafford since 2014. Hopefully that changes come Sunday, but with how Liverpool are playing this season, a draw would not be the worst result for the Reds.
Meanwhile, Liverpool striker, Diogo Jota is eagerly anticipating his first experience of encountering Manchester United as a Liverpool player.

He missed the previous two meetings this season through injury, but is now out to help the Reds get back to winning ways when they visit their fierce rivals in the Premier League on Sunday.

“Obviously every game is important but obviously being a Liverpool player, playing against Man United is always a special game – maybe even bigger than other big matches that we have in the Premier League. So, of course, we are really looking forward to it because we know how much it means to the fans as well,”Jota said.

Manchester City could be celebrating Premier League title glory by the close of play this weekend, assuming they can get the better of Crystal Palace today.

The hosts will have had five days to recover from their 2-1 defeat at the hands of Leicester City on Monday night, while Man City overcame Paris Saint-Germain by the same scoreline in the first leg of their Champions League semi-final in midweek.

Despite boasting a 1-0 lead as the half-time whistle blew, Palace soon fell victim to two almost identical goals from Timothy Castagne and Kelechi Iheanacho, as both men produced left-footed thunderbolts to complete the Foxes comeback and leave Palace’s top-10 hopes in jeopardy.

Even though the 13th-placed Eagles are not mathematically safe just yet, they are 11 clear of the dropzone with a game in hand on the bottom three, so their Premier League status is all but assured and Hodgson will simply want his players to give a good account of themselves before the season concludes.

However, Palace can boast just one win from their last seven Premier League matches, and having faced Everton, Chelsea and Leicester in recent weeks, the fixtures do not get any easier after Man City pay a visit, as Arsenal and Liverpool lie in wait in the final two weekends of the campaign.

While the Eagles have managed to keep three clean sheets in their last four home matches, only West Bromwich Albion (33) and Newcastle United (27) have conceded more goals on familiar territory than Palace (25) this season, so City can certainly aspire to replicate Liverpool’s seven-goal showing as they attempt to prise the title off the Reds.

In what was truly a game of two halves at the Parc des Princes, Mauricio Pochettino was the one sitting more comfortably in the dugout as his PSG side dazzled and delighted in the opening exchanges, and the French side took a deserved lead through Marquinhos’ header.

However, Pep Guardiola ultimately had the last laugh as his Man City team came out all guns blazing in the second half, with Kevin De Bruyne’s fortuitous effort and Riyad Mahrez’s sublime free kick – which somehow founds its way through the PSG wall – giving City a 2-1 advantage at half time in the semi-final.

The Citizens must temporarily forget about their continental endeavours, though, as they could wrap up the Premier League title should they win at Palace and Manchester United lose to Liverpool – results which would open up an unassailable 13-point lead at the top with four games remaining.

Despite two home slip-ups to Man United and Leeds United, City’s dominance on the road is showing no signs of letting up, as Guardiola’s men have won their last 10 Premier League away matches, and another victory on their travels here would see them equal the English top-flight record of 11 consecutive away wins.

Guardiola’s side cruised to a 4-0 success over Palace when the sides met at the Etihad in January, and they have strung together a five-game unbeaten run at Selhurst Park since losing 2-1 in the 2014-15 campaign.