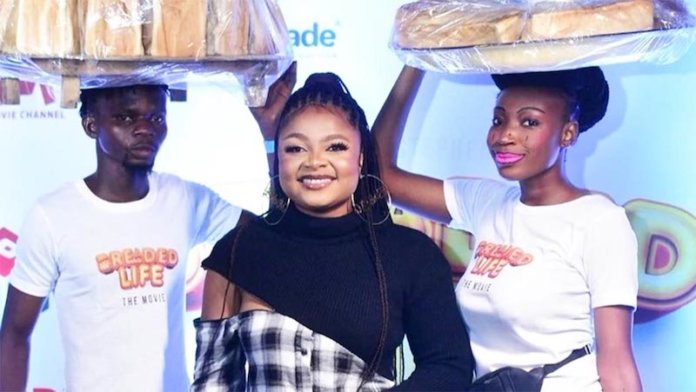 Breaded Life, the new comedy film by acclaimed filmmaker, Biodun Stephen opened yesterday in cinemas. “Breaded Life is sweet guys and it’s eager to pop up on cinema screens close to you from Friday the 16th of April…. This Friday precisely,” Stephen posted on Instagram, adding, “Breaded Life will take you on a journey you would laugh you would cry you would love. My God it’s such a beautiful, beautiful film and it’s so special.”

Prior to its opening, the new feature screened to a select audience on Saturday, April 10 at the Filmhouse Cinema, Lekki, Lagos. The hood-themed event had in attendance the film’s cast, crew and select industry influencers, including top actors, actress and friends of the Biodun Stephen. The event also showcased models spotting trays with breads, replicating the film’s comical depiction of bread hawking, a popular means of livelihood for low income earners especially in the Lagos Metropolis. The new film, directed by Stephen, is collaboration involving Shutterspeed Project and David Wade.

Recall Stephen recently revealed that ‘Breaded Life’ is the anticipated sequel to her acclaimed 2016 romantic comedy ‘Picture Perfect’ and it’s co-produced by Stephen, Tara Ajibulu and Kayode Sowade. She further revealed that the spin-off would feature characters from the film. Breaded Life is the first project from Stephen after directing Bisola Aiyeola’s debut film, The Kujus, as a producer, in December 2020.

Breaded Life evokes one of the overprotected lifestyle given a rich kid until a sudden escape. The movie follows the adventures of a haughty son from a wealthy home that learns life the tough way. Breaded Life is loosely based on the misunderstood spoilt brat (Timini Egbuson) who falls in love with a bread seller (Bimbo Ademoye). But his mom’s character (Tina Mba) would not take it.

He has made his choice. After all, isn’t responsibility relative? Timini’s character asks. True to his character, he doesn’t do drugs. Neither does he do unprotected sex. Well, maybe he does but not all the time.

What else does she want him to do? He asks again, albeit rhetorically. But his new found life with the bread seller exposes him to the other side of the world where he’s accosted. And annoyingly sets him on war path with his mum.