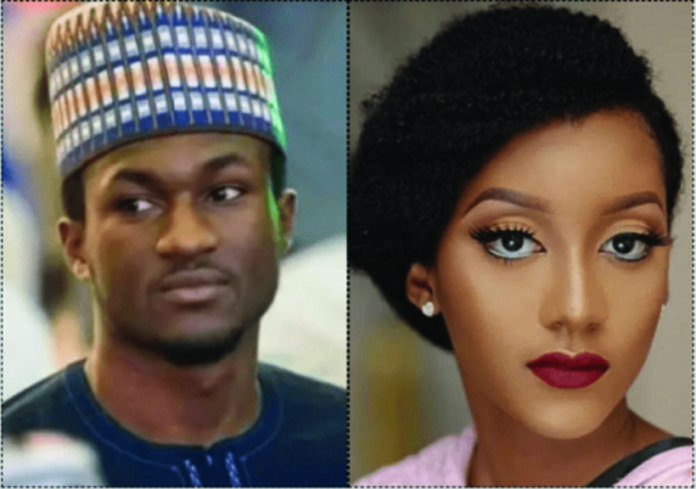 Yusuf, the son of President Muhammadu Buhari, is set to formalize his marriage to Princess Zahra, the daughter of Nasir Ado Bayero, the Emir of Bichi in Kano. Preparations are in top gear for the grand event. As the tradition provides, the parents of the groom have met with the parents of the bride at the Bichi royal palace to express Yusuf’s interest in marrying Zahra. It was learnt that the event would have taken place earlier but for the absence of the groom’s mother, Aisha Buhari, who recently returned from a six-month medical trip to Dubai.

A source said: “Now that his mother returned a few weeks to Ramadan (Muslim holy month), it is clear the wedding will take place after Sallah holidays.” Yusuf and Zarah met in the UK where the former finished his undergraduate studies. Zahra is studying Architecture at a university in the United Kingdom while Yusuf graduated from the University of Surrey, Guildford, also in the UK in 2016 alongside her sister, Zahra, now Zahra Indimi.

Zahra, apart from being the daughter of Emir of Bichi, who’s also the chairman of 9mobile, is the granddaughter of late Emir of Kano, Ado Bayero. Interestingly, the impending wedding would be the third wedding celebration the first family has witnessed since President Buhari’s time in Aso Rock. The first time saw Zahra Buhari marry billionaire son, Ahmed Indimi in a high profile marriage in 2016. The second marriage ceremony happened last year when Hanan Buhari was joined with Turad Sha’aban, son to former House of Representatives member and former APC governorship candidate for Kaduna State.

For the first family to see their only son, Yusuf marry will bring a lot of emotion after he survived serious motorbike accident in 2017. Yusuf was not talked about that much in the media until the horrible motorbike accident. On December 27, 2017, Yusuf was involved in a power bike accident around the Gwarinpa area of the Federal Capital Territory (FCT), Abuja. The accident had left the charming young man with a head injury. After receiving initial treatment at a Hospital in the nation’s capital, he was subsequently flown abroad. He returned to the country in March 2017.

“We thank God for the return of our son Yusuf today after his medical trip. On land at the airport, he was received by the Minister of Health (State) Dr. Osagie, while at the Villa he was welcomed by family members, Wife of the Vice President, the Interior minister, Governor Yahaya Bello and associates,” Aisha Buhari had tweeted shortly after he returned.
She added: “On behalf of the family, I wish to express our appreciation for the goodwill & prayers since the unfortunate accident. May God Almighty bless all and continue to guide us all rightly.”

The recluse and not so active social media Yusuf was rarely talked about in the media until the horrible motorbike accident. The sad bike incident became another page in Yusuf Buhari’s biography.