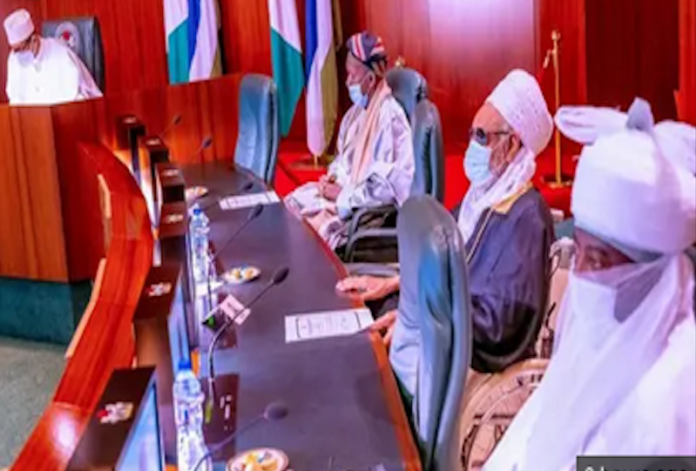 The tussle over the leadership of the Tijjaniyya Islamic Religious Movement is far from over, with a faction getting tacit recognition from President Muhammadu Buhari yesterday, following a well-publicised courtesy call on the Nigerian leader.

But two weeks ago, two factions of the sect appointed the former emir of Kano, Muhammad Sanusi II, as the leader of the Tijaniyya Islamic sect in Nigeria. He was appointed the caliph at its annual gathering in Sokoto.
The appointment, which was made during the annual festival of the sect, is seen as both a spiritual and temporal elevation of the deposed emir.

Shortly after the announcement, Sanusi II and many of his adherents converged on the Gawon Nama private residence of Governor Aminu Waziri Tambuwal of Sokoto State, where they worshipped for about two hours.
Muhammadu Sanusi I, the former Central Bank of Nigeria (CBN) governor’s father, was the first leader of the sect in Nigeria.

The origin of the Tijaniyya sect dates back to the 1830s, and was reportedly introduced to Nigeria by the Sokoto caliphate.
However, the sect broke into two factions in Nigeria after his death, with a faction led by Isiyaka Rabiu, and another led by Dahiru Bauchi.

Yesterday, Sheikh Muhammadul Mahy Niass and Sheikh Dahiru Usman were well received by President Buhari, an indication that Muhammad Sanusi II is not recognised as the leader of Tijaniyya sect in Nigeria by the Nigerian President.

Speaking at an event to welcome the factional world leaders of the Tijjaniyya Islamic Religious Movement, President Buhari thanked the Movement for their profuse prayers for an end to the civil war and the reunification of Nigeria.

Presidential spokesman, Garba Shehu said the President recalled that in the 30 months of the civil war, Nigerians on both sides lost numerous lives and prayed that never again shall we experience such.
“He welcomed the Grand Khalifa to Nigeria and commended their efforts in finding solutions to the problems of security in the country.

“President Buhari described the visit of the spiritual leader as historical while commending the sect for its peaceful conduct in carrying out its activities,” said Garba Shehu.
President Buhari recalled the lives lost to the 30-month civil war in Nigeria and prayed that never again shall the country witness such.

The presidential aide quoted Buhari as paying tributes to the martyrs of the civil war.
In his speech, the sectional leader of the Tijjaniyya in Nigeria, Sheikh Dahiru Usman described the sect as the largest with 70 million followers across the globe and prayed for continued peace and blessings for the country.

On his part, Sheikh Niass said he had come to formally introduce himself as the new leader to the government and people of Nigeria.

He prayed for peace, unity and the greatness of Nigeria.

Meanwhile, the Presidency yesterday hit back at secession agitators, declaring that nobody could bring down the government of President Muhammadu Buhari.

Senior Special Assistant to the President on Media and Publicity, Garba Shehu, who spoke on a television interview, described the secession agitators as “charlatans” sponsored to bully the President thinking he would cower or panic.

He maintained that the Buhari regime would not be kicked out of power by any group through blackmail.

The Presidential spokesman stressed that the Buhari regime was democratically elected. It, therefore, advised power-grabbers to wait for two more years to take over power in 2023 through the ballot boxes.

Shehu said: “I want to assure Nigerians that the administration of President Muhammadu Buhari is addressing multiple challenges that are facing the country, especially in dealing with security, and yet we are still making progress in agriculture, economy, anti-corruption, which are the key policies that brought the party and the government to office.

“It is sad for the country that opposition is exploiting some of these things. It is quite unfortunate and I want to assure that the president remains focused in preserving the security and unity of this country.

“It is an established fact that all nations of the world face problems and what is expected of all well-meaning members of the society is that they should team up with the government so that together we will all fight criminality and insurgency and all that.

“We accept that dissent is allowed, this is a democracy and people have a right to tell truth to government but we must be careful in doing that. Nobody can bring down the government because this is a government elected democratically.

“Government in a democracy come through periodic elections and if we have a government in office as we have, sponsored by political parties to win the elections, it is telling you that that confidence of the public is still there.

“People with strong ambitions, wait till four years, in fact, in our case, two more years to go to election and President Buhari will not be a candidate in that election.”

Growing disaffection, dissatisfaction and insecurity in the country had made some persons declare their support for Yoruba Nation and Biafra Republic.

Yoruba rights activist, Sunday Adeyemo also known as Sunday Igboho; as well as the Chairman of socio-political group, the Nigerian Indigenous Nationalities Alliance for Self-Determination, Prof Banji Akintoye, and other proponents of self-determination had last week declared their allegiance for the Yoruba Nation.

A former militant in the Niger Delta region, Mujahid Asari-Dokubo, had also recently announced himself as the leader of the new Biafra de facto Customary Government in the South-East.

Baba-Ahmed: Presidency Has Run out of Ideas

Spokesman for the Northern Elders Forum, Hakeem Baba-Ahmed, who also spoke on the television programme, however, said nobody was interested in bringing down the Buhari government.

He chastised the Presidency for labelling critics of the Buhari regime as enemies and accusing them of trying to bring down the government.

Baba-Ahmed said Nigerians want to live in a safe and secure country and that the President must protect the lives and properties of the citizens, adding that Buhari must listen to the grievances of secessionists.

Baba-Ahmed said the manner Shehu spoke depressed him and also think the presidency has run out of ideas.

The NEF spokesman added that Nigerians want an end to the kidnappings, not excuses. “Hearing him speak in this manner, I’m more depressed than I was when I came into this studio. This is how the spokesperson of the president will respond; just telling people arrests are being made? We don’t see anybody being arrested. If they are arrested, why are they not being prosecuted? Yes, he’s right, banditry and kidnapping has become an industry,” he said.

“This thing has grown into a big industry right under the nose of the president. There’s no way you can deflect attention from this. How do you explain the grown sophistication of the criminals in this country?

“You can only do that by acknowledging the failure of the government to secure its citizens. Listening to Garba, to be honest, I just think that the presidency has run out of ideas.

“When they’re confronted with a very serious challenge, they go around looking for all sorts of diversions and excuses. Nigerians don’t want to hear any of this. We want a stop to the kidnappings.”