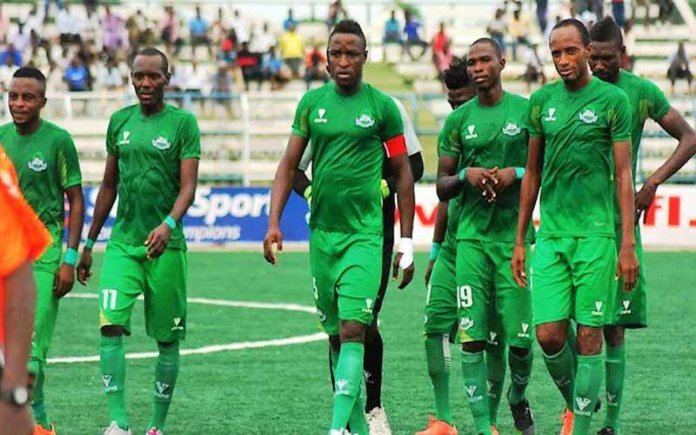 Nasarawa United secured a deserved 3-0 win against Dakkada FC yesterday to return to the summit of the Nigeria Professional Football League (NPFL).

Ikenna Offor scored a brace against the visitors from Uyo to inspire the Solid Miners to the Match-day 16 victory in Lafia. Nasarawa was on top of the Nigerian topflight for the first three weeks of the season before dropping out.

A seventh minute penalty award and expertly converted by Offor kicked off the beautiful afternoon for Nasarawa.

But Offor returned to tap home his side’s third and his personal third goal in the last three matches in the 34th minute.

Katsina, coached by Baldwin Bazuaye last won a league game on Match-day 10 at home to Jigawa Golden Stars but found joy once again in their Match-day 16 encounter with Rangers, beating the Flying Antelopes courtesy of one goal in each half by club’s topscorer Rasheed Ahmed and winger Joseph Atule (from the spot).

The win takes Katsina United out of the relegation zone for the first time in four matchdays while Rangers who went to the top momentarily after Kwara United lost to Pillars on Wednesday now drop to 4th on the log albeit on goals difference.

Salefu Ochowechi, Ibrahim Mustapha Yuga and Uche Onwuasonaya all scored for Plateau in the first half of the game while Kehinde Adeyemi provided some scant consolation for Gbenga Ogunbote’s dimmed Stars in the 89th minute.

In Wednesday’s games, Kano Pillars had joined themselves among the four teams hanging on to top spot with a Rabiu Ali-inspired 2-0 win over Kwara United at the Ahmadu Bello Stadium, Kaduna.

Rivers United also moved one point adrift of the first four teams when two second half goals from home boys Fortune Omoniwari and Nelson Esor gave them a 2-0 win over MFM FC at the Adokiye Amiesimaka Stadium, Port Harcourt.

Emeka Atuloma scored the first goal for Heartland FC in their 2-0 win over Wikki Tourists at the Dan Anyiam Stadium, Owerri while Ndifreke Effiong became the joint top scorer in the league this season when his first half penalty secured a 1-0 win for Akwa United over FC Ifeanyiubah.

Abia Warriors extended their unbeaten run to seven matches with a 1-1 draw at basement side Adamawa United in Gombe while in a game of great consequence, Warri Wolves were held to a 0-0 draw by Jigawa Golden Stars in Ozoro. Wolves head coach Evans Ogenyi was dismissed by the club’s management after the game.

Match-day 17 fixtures are scheduled for this Sunday in ten different centres.