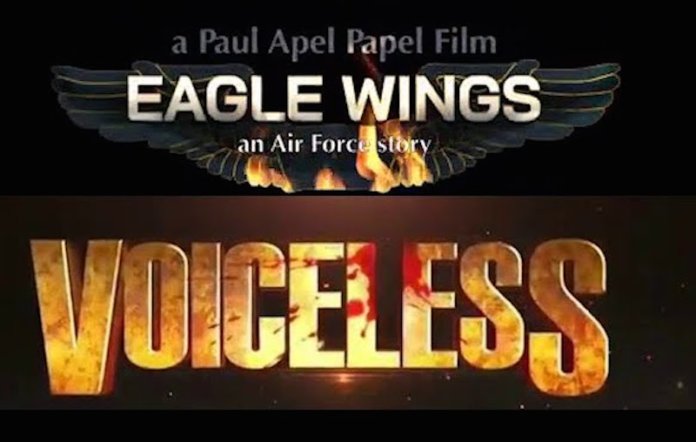 Nollywood created a new record on March 7 this year, as movie enthusiasts at the Blue Print Cinemas City Mall in Lagos, who saw the freshly baked blockbuster Eagle Wings are mesmerised till date.

Eagle Wings is a Paul Apel Papel film production in partnership with the Nigerian Air Force (NAF) Investments Limited, an investment arm of the NAF.

This action-packed and emotion-filled movie brings Nigerians closer to what the military personnel and their pilots deal with daily just to protect the nation.

Eagle Wings centres on one of the military personnel and pilot, who lost his bearing and got caught up in the enemy’s web.

Consequently, his two best friends and colleagues in the force crossed their hearts to rescue him home to his pregnant wife.

At the premiere in Lagos, the Director and Producer, Papel described the film as the biggest military collaboration with the Nollywood industry where action meet reality.

Papel recounted: “When the defence headquarters sent for a meeting with Nollywood that they wanted us to put together the story of the military that it has been negative whereas these guys are going through a lot trying to secure the country.”

While conceding that he did productions, documentaries for the Air Force, he said it was easy to tell the stories.

“I had friends among the pilots. It was easy for me to tell their stories because I know their wives,” he hinted, expressing that “In this film you will see why the insurgency is not giving up on this fight. Of course, if we give the military the kind of support they need, they will win.”

Indeed, Eagle Wings brings the family of military personnel closer to what their men suffer. Some of these women have never seen their husbands in aircraft fighting and shooting. It will help the family, and Nigerians to improve the military relations.

To breathe life into the script, the director recalled how it took six months to work on the script; over one month to plan the shoot; 48 days to shoot; and about one year for the post production.

Although he was equipped with the details for the movie, Papel said it has been a learning call. He gushed, “I now understand why the American films look different from ours. The kind of instruments we used are sophisticated. “

He listed among the instruments Arri Alexa mini camera with an open-gate format at 4444XQ codec using Anamorphic lenses to achieve the CinemaScope, with a mind blowing sound best enjoyed at the cinema.

Shot in Maiduguri, Kaduna and Abuja, and Kanji, Lapel highlighted that about N145m was spent to achieve this film. That excludes miscellaneous l. “The money is much more than that because there were other supports we got that is not quantified.”

Indeed, this film reminds the society that although the lives of military personnel are shredded in war, gunshots, explosions, deaths, and alertness, they also have emotions, and families. They crack jokes, play games, watch football among others, eat, but sleep less.

For Papel, Eagle Wings can be best experienced at the cinemas. “I will encourage everyone to go to the cinemas and see this film.”