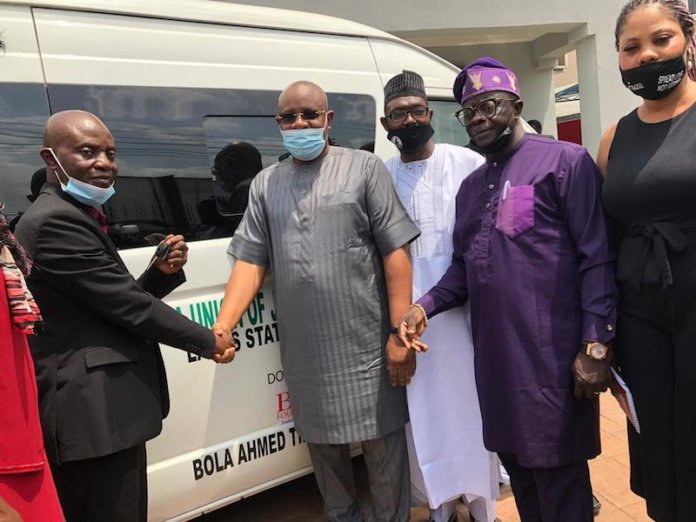 As part of its contribution and effort to strengthen journalism in Nigeria, the Bola Ahmed Tinubu (BAT) Foundation has donated an 18-seater Hummer Bus to the Nigeria Union of Journalists (NUJ), Lagos Council.

The bus was facilitated by the Speaker of Lagos State House of Assembly, Rt. Hon. Mudashiru Ajayi Obasa.

Obasa had promised the Union the bus when its executive members paid him a courtesy visit in his office on January 5, 2021.

Speaking while handling the bus over to the Union in Lagos on Wednesday, the Director-General of the Foundation, Hon. Ahmed Omisore said the former Governor of Lagos State, Asiwaju Bola Ahmed Tinubu was concerned about the well-being of Nigerians.

“The Foundation seeks to project Bola Ahmed Tinubu for what he is and has been over the years,” Omisore said.

He said BAT Foundation remained the greatest friend of the media in Nigeria, saying that “Asiwaju Bola Ahmed Tinubu is a media owner and a lover of the press, which accounts for why the Media is Tinubu’s immediate constituency.”

The Director-General acknowledged that the greatest men in the world were made by the media, hence, nobody could toy with the media as it is a veritable tool.

“This bus is given to NUJ Lagos Council in order to continue to take its rightful position as the most vibrant Council in Nigeria and to help the council in discharging its day-to-day activities,” he added.

He described the National Leader of the All Progressives Congress (APC) as a man with the largest political followership in the last two decades in Nigeria.

He said: “Bola Ahmed Tinubu is a philanthropist, a father, who is always willing to help people within a short time frame.

“Bola Ahmed Tinubu who led the the party to victory twice in the last seven years is a force to be reckoned with in Nigeria’s political space.”

Ajayi vowed to deal with individuals who engage in fake news, saying his administration would set up the Ethics & Disciplinary Committee to sanction erring members.

He therefore sought the support of BAT Foundation towards the completion of the Council’s two-storey Secretariat on Iyalla Street, Alausa, Ikeja, amongst other things.

The NUJ boss also called on more Nigerians to follow the footsteps of Asiwaju Bola Ahmed Tinubu by way of supporting the needy in the country at all times.

He expressed his gratitude to the Speaker of Lagos State House of Assembly, Rt. Hon. Mudashiru Ajayi Obasa who facilitated the bus donation, following a courtesy visit to his office by Lagos Council Executive members on January 5, 2021.

Speaking to our correspondent on the gesture, the director of Media and Publicity of BAT Foundation, Barr. Mobolaji Sanusi, said the bus was donated to ease the activities of the Union, adding that the Foundation was trying to support journalists in the foundation’s little way.

According to him, the BAT foundation is out to project the good deeds of Asiwaju Bola Ahmed Tinubu in a coordinated fashion. He equally sought the cooperation of journalists to further project Tinubu’s good will and deeds across the country.

The event was attended by BAT foundation directorate including Barr Mobolaji Sanusi, Mrs Olamide Oluokun, Mr Eronmonsele and all the NUJ executive members in the state amongst others.