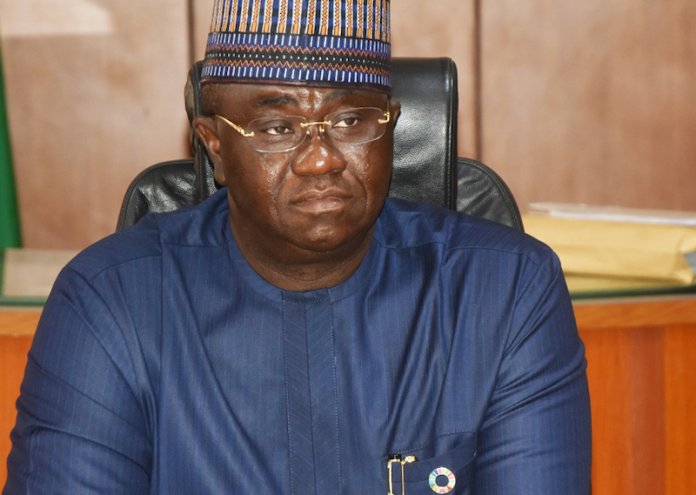 The Minister of State for Budget and National Planning, Mr. Clem Agba, has accused Governor Godwin Obaseki of Edo of deliberately spreading falsehood on the Benin Storm Water Project in order to mislead the people.

The Minister’s accusation was contained in a response to the allegation by Governor Obaseki that the N30 billion storm water project was conceived by his predecessor to defraud the people.

Obaseki, last Tuesday, while inspecting the project, vowed to probe his predecessor for embarking on the project conceived to defraud the state.
The governor specifically fingered former governor Adams Oshiomhole and Agba, who supervised the project as the then Commissioner for Environment and Sustainability in the state.

In the letter, the minister said he was taken aback by the N30 billion that the governor peddled as expenditure on the project.
He said not only was the figure false, Obaseki who was then the Chairman of the Economic team, was privy to the conception, planning, execution and expenditure on the project, adding that the Minister of Environment and Sustainable Development as well as the Ministry of works, manned by the present SSG, Mr. Osarodion Ogie, played supervised the project.

“I dare say without any fear of contradiction, that this is not only false, but also outlandishly erroneous, misleading and patently mischievous.
“As the then Chairman of the Edo State Economic Team, you were privy to the conception, planning, execution and expenditure on the project,” the minister said.

He also said Obaseki could not claim to not know that only the sum of N22 billion had been paid to the contractor for seventy per cent of the project delivered before he took over as governor in November 2016.
“By virtue of a resolution by the State Executive Council, the Commissioner for Finance was mandated to make payments directly to contractors for all projects of the government,” he said.

“I was therefore surprised at your decision to call me out on the expenditure of N30 billion on the Benin Storm water project, knowing full well that I neither expended such money, nor did I have any mandate to authorise payments as the funds were not domiciled in the Ministry of Environment.

“It is strange that you raised the question of fraud on the project against me knowing very well that my role as Commissioner for Environment and that of Commissioner of Works, Osarodion Ogie, who incidentally is the current Secretary to Government of Edo State, was limited to only supervision as this was a joint project between the two ministries.

“Two other persons, Anselm Ojezua and Frank Evbuomwan, the current Managing Director of Edo State Geographic Information Service, also served as Commissioner of Works at different times and were involved in the supervision of the same project.

“For the purpose of clarity, the Stormwater Project has, embedded in its contracts, not only side drains, underground drains but also single and dual carriage roads with walkways and street lights.

“This project was conceived as a legacy of our state government, a memorable one to the Omo N’Oba N’Edo Uku Akpolokpolo, Oba Erediauwa and drew the admiration of our sustainable development-oriented President,” he said.

Agba, however, welcomed the probe on the project provided it would be carried out in a transparent manner.
He said: “Though you have already assumed the roles of the accuser, prosecutor and judge on the issue, it is a welcome development as all Ministries, Consultants and all other participants in the project would have an opportunity to state their own side of the story for posterity sake.”