Rotary Club  to Tackle Open Defecation in Lagos 27 mins ago 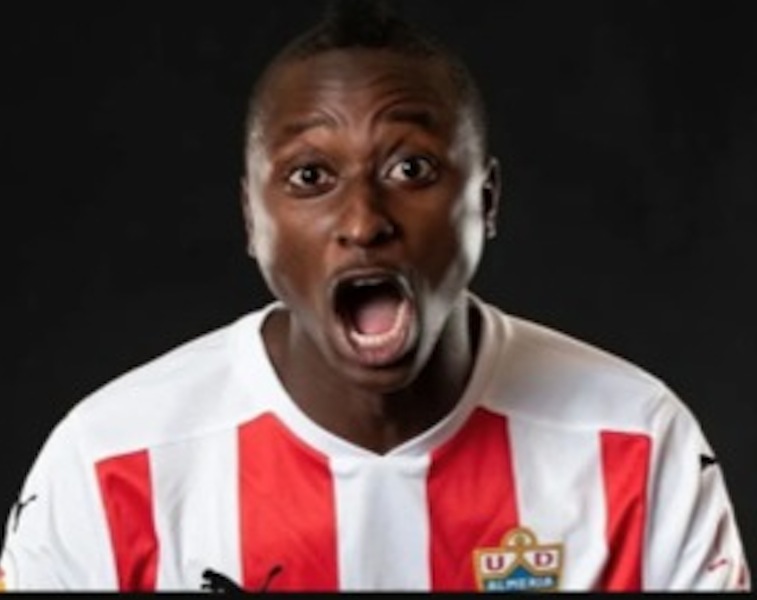 With 11 goals in his kitty and his club- UD Almeria currently third in the Spain’s second tier table, Nigerian U-23 star Umar Sadiq is leading the Rojiblancos push to the LaLiga Santander

Umar Sadiq has set LaLiga SmartBank, Spain’s second tier, on fire this season and is propelling his side to the big time promotion .
UD Almeria haven’t been in Spain’s top division since the 2014/15 season, but the club from the Southern City are serious contenders for promotion in 2020/21.
The Kaduna-born striker, their towering 24-year-old Nigerian forward, is perhaps the most important factor in their push and with 11 Segunda goals this season has propelled the club into third place in the LaLiga SmartBank.

Sadiq’s presence in Almeria is down to the sporting project laid out by Turki Al-Sheikh, who took over the club in 2019.
The club is committed to signing some of the best talents around whether from Spain or abroad. They are currently the second youngest squad in the division, yet also one of the most valuable. Having just turned 24, Sadiq is oddly enough one of the oldest in the squad.

He’s also one of the club’s most expensive ever signings, after his multi-million Euro transfer from Partizan Belgrade last summer. There was a lot of pressure on his shoulders this season with a lot expected of him but he is thriving.
Born in Kaduna, Nigeria, Sadiq came through the Future of Africa Football Academy and the Football College Abuja on his way to the top. He made the move to Europe first to Italy, joining the Spezia youth academy and then on to Roma, who he debuted for and scored for at the age of 18.

A series of loans followed as he went in search of first team minutes to fellow Italian sides Bologna and Torino, Dutch side NAC Breda, Scotland’s Rangers, Perugia back in Italy, and Partizan Belgrade in Serbia.
With so much upheaval at such a young age, it was tough for Sadiq to truly settle, but he finally found stability in Belgrade and produced an incredibly impressive 23 goals and 19 assists for the Serbian club in just 52 matches.
His talent was obvious to see, and he was quickly snapped up by Almeria to bring him to LaLiga – a league which has embraced African talent to the full over the decades. At Almería, he is experiencing a different footballing culture and continues to thrive.

As well as being the side’s top scorer, Sadiq is currently the third-top scorer in the whole division and was named the LaLiga SmartBank Player of the Month for January just a few days ago.
He’s also shone against bigger opposition, scoring a brace as Almeria dismantled top tier side
“We have a lot of confidence in him,” says Almeria coach Jose Manuel Gomes of Sadiq. “He’s a striker who disrupts opposition centre-backs, who has quality, who is very strong and who can score goals.”

His performances have not gone unnoticed. Ever since he shone at the 2016 Olympic Games, scoring four goals as Nigeria won the Bronze medal, Europe’s top scouts have been monitoring his progress.
Sadiq has been linked with some LaLiga Santander clubs of late, but he may end up playing in Spain’s top division in 2021/22 anyway if Almeria keep up their progress.
Since the start of November, they’ve lost just twice – against just RCD Mallorca and Espanyol, the two teams above them in the table and the future looks bright.

Sadiq’s case is simply the latest Spanish football success story involving emerging African talent this season.
Sevilla’s Morocco forward Youssef En-Nesyri won the LaLiga Santander January Player of the Month award for January, meaning that both the reigning Players of the Months for Spain’s top two divisions are African – something unprecedented.
En-Nesyri’s Moroccan teammate Bono has been excellent in goal for the Andalusians too.
Standing at 192cm, Sadiq is a tall and powerful striker, making him a nightmare to go up against. The Nigerian also knows his best attributes and knows how to utilise his height and strength to win aerial duels and hold the ball up for his teammates.

He isn’t perfect, not by any means, but he is continuing to improve rapidly. His height, agility, finishing and strength have been key to his fine form this season.
At the 2016 Olympic Games, Sadiq was a key member of the Nigerian squad that won a bronze medal. The forward appeared in each of Nigeria’s six games, grabbing four goals; this included a brace in the third-place play-off against Honduras to help Nigeria win 3-2.

His exploits at the Olympic Games came while he was still playing for Roma, and his achievement meant that he was the first player to win an Olympic medal while playing for the Italian outfit since Daniele De Rossi in 2004.
Of course, the summer transfer window will not be the same when it opens as teams have been hit hard financially by the Coronavirus. As a result, this could make a deal for Sadiq even more enticing.

Considering his form after joining Partizan for just €1.75m, the club will look to make a healthy profit on him if they were to consider parting ways with him. Turkish outlet Blic report that Besiktas have stepped up their efforts to sign the forward but Partizan are demanding no less than €15m.

It is even said that a bid of €10m from Qatar has already come in for Sadiq but this has been turned down. Elsewhere, further reports claim that interest in the player is continuing to rise, with both Bayer Leverkusen and Borussia Mönchengladbach also entering the race for his signature.
It is also reported that Manchester United, Milan, Valencia, Fenerbahce, CSKA and Spartak Moscow have all shown an interest in the attacker.