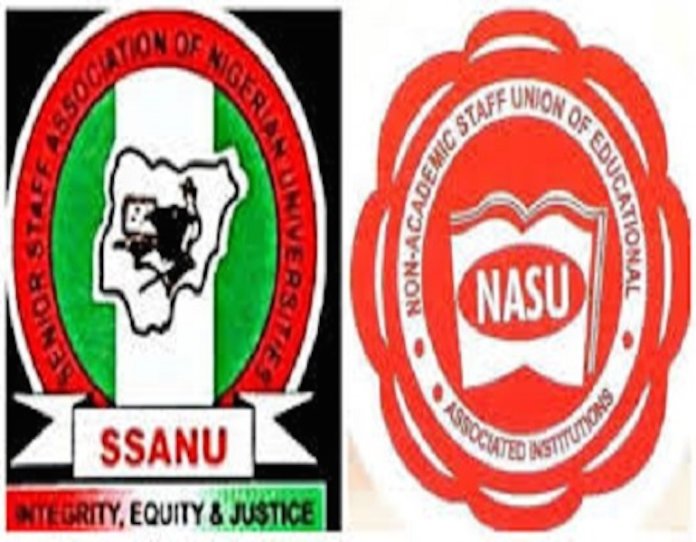 The Senior Staff Association of Nigeria Universities (SSANU) and the Non-Academic Staff Union (NASU) of Educational and Associated Institution commenced nationwide industrial action to compel the federal government to address their grievances.

The unions have also written their branches to join the strike.
Part of the strike notice jointly signed by General Secretary of NASU, Comrade Adeyemi Peters, and SSANU President, Mohammed Ibrahim, read, “In view of the outcome of the meeting, the leadership of JAC of NASU and SSANU at the branches are hereby directed to commence joint general meetings on Friday (today) to give reports on the outcome of the conciliation meeting and pass resolutions on the way forward.

“In the meantime, the nationwide strike takes effect from 12 midnight, Friday, February 5, 2021, pending any contrary resolution by the branches”.

Both unions had met last Tuesday with the federal government team led by the Minister of Labour and Employment, Senator Chris Ngige where it was agreed that a joint committee be set up to look into issues raised by the workers.
Ngige said that most concerns raised by the unions had either been addressed or were in the process of being addressed.

However, Peters told journalists at the end of the meeting that the parties did not reach any agreement, stressing that the position of the unions on the February 5 strike ultimatum remains unless the relevant organs give further directive to the contrary.

He said that the leadership of the two unions had agreed to take the issues discussed back to the members for their input.

The unions listed their grievances to include, alleged discriminatory disbursement of the N40 billion Earned Allowances, inconsistencies in in the implementation of the Integrated Payroll and Personnel Information System (IPPIS), non- payment of arrears of national minimum wage, delay in renegotiation of FG/NASU and SSANU 2009 agreement and non-payment of retirement benefits of outgone members.

Other issues in contention are the usurpation of headship of non- teaching units by the teaching staff in clear violation of condition of service and establishment procedures, neglect and poor funding of state universities and non-constitution of Visitation panels for universities.