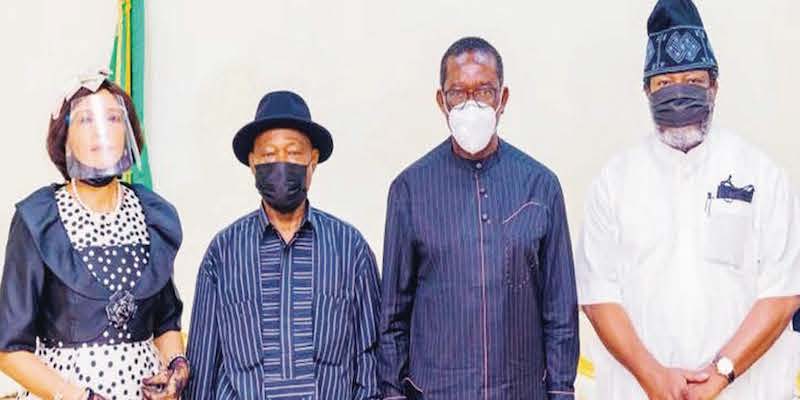 It was the turn of media leaders yesterday to commiserate with Delta State Governor, Senator Ifeanyi Okowa, over the death of his father, Sir Arthur Okowa, who died last week at 88.

Led by Chairman, THISDAY/ARISE NEWS Group, Prince Nduka Obaigbena, they told Okowa to take heart even as they praised him for the strides he had made in the development of infrastructures in the state.
Others on the condolence train are Publisher of VANGUARD Newspaper, Mr. Sam Amuka, and his THE GUARDIAN counterpart, Mrs. Maiden Ibru.

Speaking during the visit, Ibru commended Okowa for the visible infrastructural development in the state.
She said she was impressed with the “massive infrastructural upgrade in Delta, especially in Asaba, the capital.’’
According to her, Okowa’s success in his political career and his performance as governor is a reflection of his humble upbringing.

The publisher urged the governor and the family to take solace in the fact that their late father left indelible footprints in their lives and for humanity.
Obaigbena said the deceased valued education and gave his children the best of it.
According to him, Pa Okowa was one of the last of the `originals’ who went the extra mile to ensure that their children got the best of education.

“He was a great educationist, who ensured that his children went to the best of schools, which has helped them to become great achievers in life,” he said, adding: “We have come with a strong delegation here to condole with you on this sad development, and with pain in our hearts and smiles on our faces, we mourn with you.”
Obaigbena also spoke briefly with newsmen on behalf of the publishers.

He said: “Pa (Arthur) Okowa was the last of the originals. And, as you can see, he has taken his children through the field of education. His son here, His Excellency, Ifeanyi Okowa, has gone to the best schools – from secondary school to the university, into being an accomplished medical doctor. “Moreover, he brought him back to the community, from where he rose through the tutelage of politics. He was Secretary of Local Government Council, local government chairman, commissioner, Secretary to State Government (SSG) and senator before being governor of Delta State.

“That can only be a deliberate nurturing of a strategic mind.
“So, we are here – Uncle Sam Amuka, an original serving journalist; and Maiden Ibru, who hardly goes out – it shows that she holds Governor Okowa in great esteem. And, we’re here to share in his pains, no matter how old Pa Okowa was.

Okowa thanked the delegation for the visit, saying that he is consoled by the love and attention shown to him and the family by friends and well-wishers.
He described his father as an accomplished teacher, politician of repute and an astute community leader, who left indelible marks in the sands of time.

He said: “Let me register my appreciation to the gurus of newspaper publishing from our dear state. I truly must thank you and I appreciate this visit. We are very encouraged for this visit knowing that it’s a visit by high calibre of persons.

“Being a teacher helped my father to mould our lives at our very early ages, which helped us to grow our lives to what we are today.
“From the testimonies, we gathered we have been made to understand that he played much more roles than we knew because of the many lives he touched.”

The governor also received a delegation of members of the National Assembly from Delta led by Minority Leader of the House of Representatives, Hon. Ndudi Elumelu, and expressed gratitude to them for their support.
Elumelu told the governor that they were in Asaba on a condolence visit because they were pained by the demise of the patriarch of Okowa family.

“For us, his loss is not just for you and your family because he played key roles in the lives of so many people.
“We lost a father because he was the father of the state; we believe in your leadership and we will stand with you during the funeral,’’ he said.

The lawmakers also condoled with the governor on the demise of the Majority Leader of the House of Assembly, Mr. Tim Owhefere, who died on January 27, 2021.