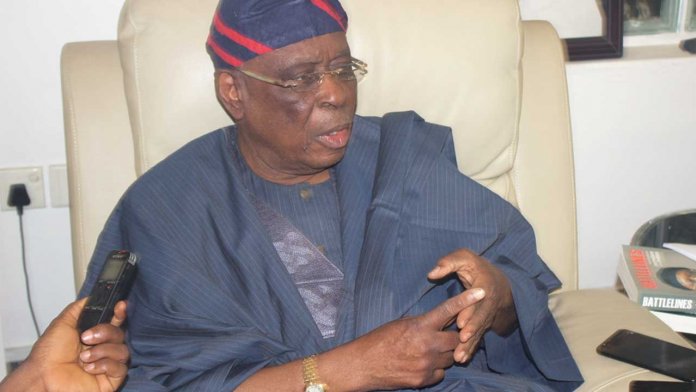 A former Governor of Ogun State and chieftain of the All Progressives Congress (APC), Chief Olusegun Osoba, yesterday joined the fray in the raging debate in the party over whether or not the presidency should return to the South after the two-term tenure of President Muhammadu Buhari in 2023.

Osoba, while fielding questions on The Morning Show, the flagship breakfast programme on ARISE NEWS CHANNEL, the broadcast arm of THISDAY Newspapers, said there was a gentleman’s agreement during the 2013 merger talks that the presidency would rotate between the North and the South.

The Congress of Progressive Change (CPC), All Nigerian Peoples Party (ANPP), Action Congress of Nigeria (ACN) and a faction of All Progressive Grand Alliance (APGA) came together to form APC.

Ahead of the 2023 final tenure of Buhari, there is a swirling controversy in the ruling party over whether or not the APC should concede its presidential ticket to any of the three zones in South, South-west, South-south and South-east, or throw it open.
Some party chieftains, including Minister of Transportation, Mr. Chibuike Amaechi; his Works and Housing counterpart, Mr. Babatunde Fashola (SAN); former Zamfara State Governor, Senator Sani Yerima and Senator Ibrahim Shekarau, representing Kano Central, have started taking a position on the matter.

While Amaechi backed Fashola who had earlier said the party had a gentleman’s agreement on zoning, and urged APC to respect the zoning agreement, Shekarau said rotational presidency is alien to the party as it is not in the APC constitution.
On his part, Yerima said the APC had no pre-merger agreement to rotate the presidency between the North and the South.
However, Osoba provided more insight into the pre-merger discussions on the issue yesterday, saying that as the chairman of the constitutional drafting committee during the merger, they were careful not to use the word “zoning” so as not to be in conflict with the constitution.
But he added that they agreed that the North should produce the president while the chairmanship position of the APC goes to the South.

Osoba said: “My honest opinion is this: I was the chairman of the constitutional drafting committee of the APC merger. We of ACN, we were the dominant group from the South, and the South-west is the home and the root of progressive politicking.
“Part of the understanding in the case of rotation is a conventional understanding that the presidency will move between the North and the South. That was the reason why we now allowed the chairman (of the party to come from the South). I don’t want to use the word zoning because we definitely did not put zoning. We know it may go in conflict with the Nigerian constitution, which says anyone who is a Nigerian, who has read up to school certificate, can contest and at the age of 35, I think can contest for the presidency of the country.

“But there was a clear gentlemanly understanding that the northern part of the country will produce the president when we did the merger in 2013 and the chairman of the party will then come from the South.”
Osoba stated that the understanding informed why the chairmanship of APC has remained in the South; moving from Chief Bisi Akande in the South-west to John Oyegun from South-south and also Adams Oshiomhole from South-south.

He also defended the right of APC National Leader, Senator Bola Tinubu, who is rumoured to be nursing an ambition to succeed Buhari, to contest for president in 2023.
He, however, urged the South-west to unite and put its home in order to achieve success in the next presidential election.
“Asiwaju Bola Tinubu as an individual has the right to put himself forward. We have not zeroed in on an individual. Zeroing in on any individual will destroy our efforts now but Asiwaju Bola Tinubu has a right to pursue his own agenda,” he said.
On restructuring, he stated that it was part of the electoral promise made to Nigerians by the ruling party that the country would be restructured.

Osoba said: “I want to be very honest with you, I was one of those that was given the mandate by the ACN then; the ACN was a very crucial party and a crucial part of the merger because we were the strongest in the South. We had all the governors in the South-west; we produced the highest number of governors at the point of merger among all the parties that were involved in the merger- the CPC, the ACN were the major players.

“The APGA did not participate but Governor Rochas Okorocha of Imo participated as an individual because the APGA as a party did not participate; but he was a governor under the umbrella of APGA. He represented the East, so to say, and we of the ACN went to the merger because we had all the time when we were in Alliance for Democracy (AD) as governors we were fighting for the restructuring of Nigeria. We were always in court with the then President Olusegun Obasanjo.
“On fiscal federalism, we went to court that all revenue should go to the Federation Account from where it will be distributed according to agreed formula stated in the constitution.”

He stated that they went to court because Obasanjo breached the provision of that constitution.
Osoba said: “He was just spending money as he liked. He even went as far as tampering with the local government funds, using it to buy vehicles for the police and all kinds of things. And we warned and warned, when he didn’t listen, we went to court.
“In actual fact, he brought a memo to the Council of State on local government reforms and we threw it out on the grounds that we were in court and the following week we won the case that the affairs of the local government should be within the precinct of the federating states.”
Osoba said he cited the above examples to show the reforms that the then AD took and how they fought Obasanjo on many issues on federalism.

“And I’m sure it was because of all these actions that we didn’t allow President Obasanjo to go haywire and turn the centre to a more powerful non-federal system that made him at that point to rig the election that those of us who are highly strong and vociferous at Council of State did not return as governors. I had no regret. I have my peace of mind; I offered to serve.

“These are the things we were fighting for as AD. It was this philosophy that we carried on into the merger; and we of the ACN, part of the agreement that we reached, I was a strong member of the merger group, as I said, I was the chairman of the constitution drafting committee, where we laid down a lot of provisions in our constitution that we have as checks and balances. We insisted on true federalism and a restructuring of the country and we insisted that it would be part of the promise that we made to Nigerians.

“Those of us in the South-west are the leaders on the issue of restructuring and it was embedded in the APC manifesto. If you google the manifesto of APC today, you will see the promise that we made to Nigerians in that manifesto. The issue of true federalism and restructuring which was in our constitution.”

According to him, after the party won the election, even though it took some time before the party addressed the issue of restructuring, the party set up a committee on true federalism and restructuring under the leadership of Governor of Kaduna State, Nasir el-Rufai.
He explained that the el-Rufai committee produced a report on restructuring, but expressed worry that some people sat on the report after it was agreed to by the party.

Osoba said: “The report went before our National Working Committee, where it was fully debated and attended to. It was brought to us at the National Caucus of the party with the president in attendance. We debated it, adjusted it and the following day, it was taken to the National Executive Committee (NEC), which was the final body and it was adopted.”
He said the report was to be sent to the National Assembly where it would be debated and ensured that many of the recommendations are passed into law.

“To my shock, I believe some people sat on that report, after it had gone through all levels of the party and in attendance were all our governors and the president himself. I am surprised that some people can sit on a policy already agreed to by all organs of the party. That was the state in which we are.
“I have access and I don’t want to talk too much on the efforts that those of us from the South-west have been making to ensure that we seriously address this issue,” he added.